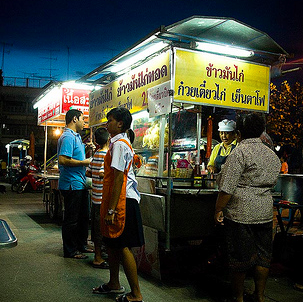 Greetings from an edgy and interesting Bangkok, Thailand. I’ve set up camp in the Silom area and have been having fun working, writing, wandering, and talking with people.

Last week I took my inaugural journey on Air Niugini Airways, flying on the Manila-Port Moresby night flight, and then later over to Singapore on my circle of the region. I don’t think they’ll be joining the OneWorld alliance anytime soon, but it wasn’t that bad either.

The title of this post is somewhat of a misnomer: I almost never experience travel that is truly stress-free. For starters, not all travel can or should be predictable. Sometimes the unexpected is better than the planned.

Secondly, not all stress is bad, because some of the most challenging times in our lives are the most stressful. No risk, no glory—that kind of thing.

Yet, when heading out into the world, it helps to control as many variables as you can. I’d rather experience travel stress related to something fun than something preventable that was my own fault. With that in mind, here’s a primer on low-stress travel—and your contributions are welcome too.

Pack everything in the same place every time. On most trips I take the same clothes and the same gear. I also try to put them in the same part of the bags every time. If necessary, I can now pack for a two-week trip in about 20 minutes. It also helps when packing and unpacking in hotels or guesthouses. I walk in the room and immediately unpack everything I need for the stay. The night before leaving, I repack.

I’ve recently switched bags and have been evaluating a new system. Thus far the verdict is mixed: I’ll probably be better for it in the long-run, but in the short-run I hate the fact that I don’t know where things are. I might even go back to the original, well-worn bags because the system was so ingrained.

Spend more money. I often get stressed out spending small amounts of money. Overall, this isn’t always bad—it’s led to a healthy paranoia about debt and a lifelong adherence to frugality. However, it has its downsides too, in that I can spend hours walking around trying to decide what to eat, or hours trying to figure out the public transit system somewhere instead of just flagging down a taxi.

It only took me about 100 countries—I’m a slow learner—but I finally created a $10 rule for myself that has been rocking my world. The $10 rule is that when I’m traveling, I deliberately avoid worrying about most things that cost $10 or less. As I said, this makes a big difference. I actually eat three meals a day now. If I can’t find free WiFi, I’ll walk into a hotel and pay for the connection. SO MUCH LESS STRESS.

If you get lost, look dumb.If something goes wrong in an unfamiliar setting, stand around for a while and look as lost as you are. Someone may show up to help, especially if you look different from most of the people who live in the country. If you don’t speak the language, most of the time someone will show up to help with that too.

Side note: in my experience, this practice does not work in Russia. In Russia, you’re on your own.

Carry three copies of your passport in different places. I’ve lost two iPods, one Nintendo DS, and countless other things around the world. Thankfully I haven’t lost my prized passport yet, but just in case, I’ve got multiple copies that would make the replacement process easier if it happened. One goes in one bag, the second goes in the other bag, and the third goes in my wallet.

Personally I like hanging out in airports, so I usually pitch up quite early. However, because of transfers, a meeting, or general ineptitude, I’ve also been OMG SO LATE so many times—but in almost every case, the flight was still waiting. And the few times when it wasn’t, well, something else worked out.

Memorize your passport number. This is how you tell an experienced traveler from a beginner: before an international flight lands, everyone is given a landing card to fill out. This card always asks for your passport number. Look around and see who has to pull their passport out of the bag to look it up versus who has it memorized. If you start traveling around the world, you’ll need your passport number for a lot of things, so you might as well memorize it.

Side note: I like to play a fun game where I try to fill out the landing card as quickly as possible. My personal record is nine seconds. It turns into even more fun when the immigration official makes me complete a new one because he can’t read my handwriting—perhaps disqualifying the record.

Get free airline lounge access anyway you can. Most lounges in the U.S. suck, but they’re better than sitting outside. Half of the blog posts I file while traveling are uploaded from various airline lounges. I’ve probably spent a cumulative total of several days inside the Cathay Pacific lounge in Hong Kong.

How you get access varies depending on the situation. I have elite status with all three alliances due to status matching, which helps. You can also wrangle a premium ticket, pay for an annual membership, or find someone willing to let you in as a guest (it doesn’t usually cost them anything). Whatever you have to do, if your goal is reducing stress, and even more so if you’re working on the road, the lounge helps a lot.

Be proactive if something goes wrong. If you have a complaint with an airline or hotel, don’t just tell them what’s wrong—tell them exactly what you want them to do to fix it. Propose an alternative solution, ask if there’s anyone else you can talk to, whatever. Just do something.

Note that standards of customer service vary considerably around the world. In many places, no one will take the initiative to fix something for you unless you are proactive about making it happen. If the situation is important, don’t wait for someone else to correct it; take action yourself.

Remember, the goal is low-stress travel, not stress-free travel. At the end of a recent trip I came home to Portland after 20 hours of flying from Asia. It was 11pm by the time the airport train dropped me at the bus stop. As I walked to the stop I could see the bus leaving. I was a mile and a half from home, and the next bus didn’t come for 24 more minutes.

Instead of hanging out, I decided to walk the rest of the way. My feet were sore from wearing the same shoes for weeks and then flying all day… but I’m supposed to be a runner, so what’s 1.5 miles? I had to carry my bags, but that’s why I travel light, yes? It rained a little, but hey, I live in Portland.

The walk home gave me time to reflect back on the trip and consider the various things that had gone right or wrong. All things considered, I love my adventures and wouldn’t trade them for anything.

Have anything to add? Feel free to share your advice for others in the comments.

Luck Appears When You Show Up: Notes from UA 250
© 2022 The Art of Non-Conformity | Site by Bytegrow Technologies