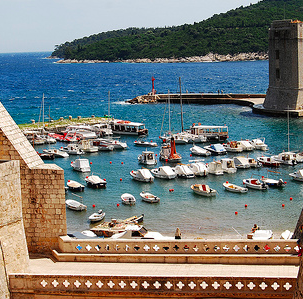 Monday’s post was about how I paid for much of my travel to 193 countries by being intentional about priorities and practicing selective frugality. Today’s post continues the story…

I didn’t begin travel hacking until long after I began traveling. At first, I did what everyone else did—I had a couple of Frequent Flyer accounts, I looked online when buying tickets, I tried to comparison shop and get the best deal I could, but I didn’t know much about the tricks of the trade.

One time, early in our years of living in West Africa, Jolie and I were coming back on a trip from Amsterdam. A Delta agent at the gate took our boarding passes and exchanged them for new ones. “You have been upgraded,” the agent said.

After that experience, I began to wonder if there was anything I could do to gain an advantage over the average traveler. The next year we wanted to go home for Christmas, and I discovered if I bought SkyMiles from someone on eBay (technically against the rules, but Delta didn’t care at the time), I could arrange to fly in Business Class all the way from Cotonou, Benin to Atlanta.

When we transited through Paris, I felt like a luxury traveler. Everyone always talked about how terrible Charles de Gaulle airport was, but we went straight to the Air France Business Class lounge and found it highly relaxing.

I walked around the lounge in awe, picking up all kinds of free stuff.

Can you believe these croissants are free? (I’ll have six, please.)

The cappuccino machine is unlimited? (I’LL TAKE ONE MORE!)

Funny how these things work: two years ago I went back to the same lounge while transiting to Central Africa and was amazed at how small it was. The croissants were stale and the cappuccino machine was unexciting. Lesson: Appreciate what you have, while you have it.

After we moved back to the U.S. and I started traveling on my own, the search for cheap travel took on a quest of its own. I went on a “Circle Pacific” trip to Asia, making five stops, experiencing new countries along with new airlines. I began collecting spoons from each airline.

These days, the Starwood Preferred Guest card offers a bonus of 25,000 points just for getting it—and you can also get the Business version to earn an additional 25,000 points. Bam! Back then, though, I was happy just to have the card and earn one point for every dollar of spending.

I was also a big fan of Priceline, a service I don’t use much anymore. In those early days I spent most of my trips staying at hostels and budget hotels, but at least once a week I’d use the “Name Your Own Price” option to book a room in a nice place. I didn’t have elite status and wasn’t collecting hotel points (aside from the Starwood card) but I was still enjoying the benefits of low-cost travel.

From those experiences I started branching out and learning more. No going back!

After the Circle Pacific trip through Asia, I learned more about Round-the-World tickets. At the time you could purchase RTW tickets that were valid up to 20 segments, and I regularly used all 20… over and over.

I learned that it would be much cheaper to begin the trip from another country, so I began RTWs from Japan, Korea, and Sri Lanka.

I don’t buy as many RTW tickets now, but I still purchase at least one a year. In January I’ll be doing a two-week trip from South Africa to Qatar to Malaysia, eventually returning to the U.S. before continuing on later. In some cases, the tickets are still a great value.

After getting the Starwood card and using it for years, I began to have more business spending—so I picked up the AmEx Business Gold card as well.

Then, I started getting Citi cards—several of them. I learned that Citi offered a plethora of different card products, all tied to American Airlines. You could get a Visa, Mastercard, or American Express branded Citi card—and you could also get a business version of each one!

Each card offered a signup bonus after completing a low minimum spend (usually $750 in 90 days). Furthermore, many of these cards could be acquired repeatedly. After having one of the cards for a few months, you could simply cancel it (or just stop using it) and successfully apply for a new card with a new bonus.

This was fun. I was shocked when I continued to be accepted for the cards, and continued to receive the bonus, as much as 75,000 miles each time.

These days, you can still earn bonuses on the Citi American Airlines cards, but not as many as before and for not as many miles. Still, the whole experience got me thinking. Were there other cards? How could I replicate this experience on a grander scale?

This led to the original Frequent Flyer Challenge where I applied for a dozen credit cards on the same day and was accepted for each of them. This practice is fairly common now (a number of bloggers write about it a few times a year), but at the time it was fairly new.

If you’re curious you can read the most recent Frequent Flyer Challenge results, along with several other posts, in the archives.

Why Write About Travel Hacking? Because Traveling = Freedom

Sometimes when I write about travel hacking, I hear from readers who don’t get it or don’t think it fits well with the rest of what I write. I understand the complaint, but I also think that a blogger should write about whatever he or she wants.

If I start thinking about how people will respond to any particular post, I won’t be very motivated to keep writing. Better to focus on the people who do get it, and keep moving forward.

As I see it, the connection between travel hacking and everything else I do is freedom. For the past decade I’ve been able to go anywhere, anytime. The opportunities are endless and the possibilities wide open.

Next week I’m heading to Australia, one of my favorite places in the world. My trip there is an award ticket on Virgin Australia, and I’ll be staying in hotels on points for my first three nights.

I don’t have a ticket back, and I’m really not worried. Because I have enough miles (in several different accounts), I know I can figure something out.

Miles are for spending, and travel hacking provides freedom.

That’s all from me. How about you?

We heard from a number of readers in the first post earlier this week. Has travel hacking helped you?