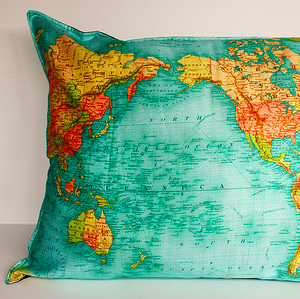 Last weekend I had the honor of speaking to 600 people at Frequent Traveler University, a conference devoted to the world of points and miles.

A longtime friend, Gary Leff, asked me to share a few lessons from the 11-year journey to every country that just wrapped up a few weeks ago in Norway. What have I learned?

Good question. I thought about it for a while and here are some of the highlights I came up with.

I’ve been all over the world for free or almost free thanks to Frequent Flyer Miles, but they don’t do anyone any good if they are left unused.

Miles are a depreciating currency. A block of miles or points acts as a tool that allows you to experience things that would otherwise be difficult, expensive, or unobtainable—but miles and points have no value on their own.

If you have miles, or money, or the most valuable asset of all—time—put it to good use. Spend it!

(I wrote about this lesson previously in Life Is for Spending.)

Lesson #2. If you can figure out all of the costs of a goal, it becomes much easier.

Having a structure helped me as the quest became more difficult over time. Knowing how many countries existed in what regions and what the visa laws were for each country and what the likely obstacles would be and so on… all of these things were benefits that made the whole project much easier.

Going from 50 to 100 countries cost me approximately $30,000. Once I realized that it wouldn’t be terribly expensive, at least when spread out over a number of years, I was eager to commit to the goal.

Far from feeling restrictive, the more I created structure around the process of continuous travel, the more feasible the goal became.

(I wrote about this lesson previously in The Tower manifesto.)

I didn’t just say “I’m going to visit every country” before I had been anywhere at all. I first lived overseas for four years, and then I traveled for a long time just because I loved travel.

After I had been to 50 countries, I thought, maybe I can get to 100. And then as I grew closer to that goal, that’s when I thought, well, 100 isn’t good enough. Why not go everywhere?

Sometimes I hear from people who haven’t traveled much, and they write in to ask questions about visiting Europe, Asia, or North America for the first time. They always feel like they have to apologize or produce some kind of disclaimer: “I know this is no big deal compared to what you do all the time…”

I always say: “No, it’s great that you’re doing that!” When you begin to travel for the first time, it IS a big deal. And then, the more you travel, the more comfortable you’ll feel traveling.

I recently wrote down a list of all my travel mistakes and realized I had actually made more mistakes toward the end of the journey than in the beginning. As I grew confident, I stopped double-checking everything. I often confused the dates of travel and on one particular challenging occasion in the Seychelles, the departure time of an international flight.

Yet by then I had learned that even when something went wrong, it was probably going to be OK in the end.

(I wrote about part of this lesson previously in Kind of a Big Deal.)

LESSON #4: There is almost always more than one way to accomplish something.

Gary recently wrote a post called Hang Up, Call Again. His premise is that whenever you don’t like the answer you receive from an airline rep, you should simply hang up the phone, call again, and ask someone else.

This is great advice! And it’s not only good for dealing with airlines. When you don’t like the answer you receive in life, you should hang up and call again.

I skipped two years of college with this rule.

I went to Pakistan and Saudi Arabia without a visa (and Eritrea too, although that one was admittedly more problematic).

I’ve rerouted and changed many tickets that are supposedly non-changeable. One time in Bangkok I skipped the immigration line and self-immigrated, saving two hours and then sorting it out on my way to the next destination.

I’m not recommending you skip immigration or crash-land in interesting places around the world, but the point is that there’s usually more than one way to accomplish something.

I’m a very frugal person by nature. Part of what drew me to the world of miles and points was because it allowed me to experience things I wouldn’t otherwise pay for.

Frugality is a good value if you’re trying to get out of debt, but if you find yourself walking up and down the same street for an hour with your bags in the rain because you don’t want to spend $8 for a taxi, perhaps you should rethink your priorities.

If you decide not to eat in airports because the sandwich is too expensive, and then you’re tired and lethargic for the rest of the day, you have no one to blame but yourself.

After too many experiences walking in the rain or going hungry from not buying the sandwich, I made a rule that while traveling I would always pay $10 or less for something that improved my life, without thinking much about the decision. It made my traveling life much better.

LESSON #6: You should decide for yourself what you like.

I’m not an argumentative person and I don’t like to debate. There’s one thing that annoys me, though—people who say that “you’re doing it wrong.” When it comes to travel, you’re not doing it wrong just because it’s not their way!

You can spend as much or as little time as you like in any particular place. You can stay at a hotel instead of a hostel if you want. Should you even decide to change your mind about something at some point, feel free.

For years I carried a camera and took photos because I thought it was supposed to do as opposed to something I enjoyed. I wasn’t good at taking pictures. Plenty of other people have that department covered—see Thomas, Tera, Stephanie, and many AONC readers—but it’s not my thing.

For me, when I stopped taking pictures, I enjoyed myself much more.

LESSON #7: People are NOT the same all over the world.

Sometimes you hear an observation that people everywhere are all the same, and I think this is a very superficial comment. People aren’t the same, and that’s good!

The differences are what is interesting about the world and about travel.

Different cultures have different values and different ways of thinking about life. Before I went to Jordan, I had never spent much time in a country where Islam was the most common religion. I went away with much more respect and understanding than I had before.

The same was true for me all over the world. In Bhutan I learned about Buddhism from the source, in India I talked with Hindus and Sikhs, and these are just a few examples.

Around the world, most people are good. But that doesn’t mean they’re all the same, and that’s OK.

LESSON #8: In some ways, the world is rapidly changing… but in others it’s not.

I like to tell the story of a friend who visited Afghanistan. In his rural guesthouse, there was no running water, but the WiFi and cell phone service was great. He took a bucket shower while uploading photos to his website.

Elsewhere, there are still plenty of people who live on less than $2 a day, and sometimes even less than $1 a day. Approximately 40% of the population in sub-Saharan Africa lacks clean water. Basic healthcare and primary education remain out of reach for most of the people in rural parts of the world.

Therefore, it’s important for those of us who do have not only clean water but also tremendous opportunities to ask what they can do to contribute.

How can you make the world a better place? What can you offer?

LESSON #9: If you have an idea to do something crazy, pay attention!

Once in a while, someone asks if I have any regrets about traveling for so long. The simple answer is no. I don’t regret anything about the journey. If I wasn’t in a particular place for a long time, I can always go back to see places I appreciated and wanted to learn more about.

That’s what I did last week with Istanbul—after the Frequent Traveler University event last weekend, I hopped over to Turkey for a few days of revisiting a culture I wanted to learn more about.

There is just one thing I think of when I think about regrets. Years ago, when I first had the idea to “go everywhere,” it stuck with me. I wasn’t necessarily committed to it right from the beginning, but as soon as I had the idea, I knew I would regret it if I didn’t try.

Years later, I can say with confidence: this was a great idea! I’m so glad I followed through!

My advice to you, if you care about such a thing, it to think carefully about things you’d like to do.

While writing of The $100 Startup, I heard over and over that people who started a small business were primarily motivated by freedom. They said things like:

“I wanted more ownership of my life, more independence. I wanted to make my own choices.”

After they took action on an idea and started their project, they said things like:

It’s great that there is so much possibility in the world. All of us have remarkable opportunities that are somewhat new—the ability to see the world, sometimes over and over, the ability to determine the course of our own future.

Let’s use it well. Let’s not waste these opportunities. Let’s live actively and seek to engage wherever we can.