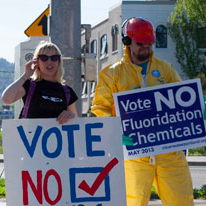 When I’m not roaming the world, I live in Portland, Oregon, land of strong coffee and tall bikes.

Portland is a fun little place, and it also happens to be one of the most progressive cities in America. You can buy marijuana at a food cart beginning at approximately age twelve.

When George Bush (the first one) visited Portland, so many people turned out to protest that he dubbed the city “Little Beirut.”

Walking down the street on any given day, you’ll be accosted by people who want you to save the rain forest or support homeless anarchists.

A couple years ago, after moving from Seattle, I went to the dentist for a cleaning. The hygienist and the dentist both mentioned that I’d need to supplement brushing and flossing with my own fluoride source, since it’s not included in the water supply in Portland.

What? No fluoride in the water? That seemed strange, but what do I know about fluoride… obviously not much.

So then I do some reading and see that Portland is the only major metropolitan area in the entire U.S. that does not fluoridate its water. Really? The only one?

Because of the lack of fluoride, kids in Portland have twice the number of cavities as kids in Seattle.

Finally, the City Council voted last year to bring our city into the 20th century by approving fluoridation—and then all hell broke loose, with all sorts of people lining up to protest what seems to be a fairly normal thing elsewhere.

One of our newsweeklies, the Willamette Week, reported yesterday on the campaign to “stop putting drugs in the water” and the upcoming public referendum.

Much of this campaign is funded by out-of-state conservative groups, including the Koch brothers and the John Birch Society. All of these groups are lined up against virtually the entire medical community, with a tiny number of exceptions.

Yet here in the capital of hipsterdom, where Barack Obama is considered far too moderate for many Portlanders, it seems that a lot of people are buying into the idea that fluoride is a harmful intrusion into their civil liberties.

My favorite quote from the article described the strange coalition that has lined up to oppose health and hygiene:

“It’s as if an Occupy protest, a talk on artisanal cheesemaking, and a Tea Party rally were all accidentally booked at the same hotel ballroom.”

In this case, the hybrid campaign of Occupy + Tea Party + yoga moms against fluoridation is certainly unconventional. They’re challenging the entire medical establishment, including the CDC, which says that fluoridation is one of the top 10 health achievements of the last century.

Maybe I’m too judgmental, though. Maybe there’s a good reason all of these people are so upset.

Either way, what do you do when the unconventional opinion seems to be … wrong?

Feel free to share your comments, whether you’re from Portland or not.

Update: Thanks for all the comments! As you can see, a range of opinions was shared by our great community. We’re now moving on to other things next week.

I’m partnering with @quarterly to send fun things in the mail 4x/year. Sign up to receive the first #CGQ01 shipment.

A Short Note on Bridge Jumping

By Any Means Necessary