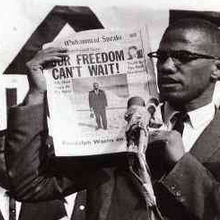 February is Black History Month in the United States, where we recognize the achievements of African Americans and honor our culture of diversity.

A lot of attention during this time is focused on the legacy of Dr. Martin Luther King, Jr., and rightfully so. Above my desk is one of his most famous quotations:

“Life’s most persistent and urgent question is this: what are you doing for others?”

This question troubles me, as it should.

As much as I love MLK, though, I’m also a big fan of another martyr of the Civil Rights Movement: El-Hajj Malik El-Shabazz, or Malcolm X, as he is more commonly known.

I’ve been intrigued by Malcolm since I first began learning about social movements more than 10 years ago. If you’ve never read his autobiography, I highly recommend it. The movie by Spike Lee with Denzel Washington is also good.

The conventional narrative on Malcom X is that he was a bit too hard-core for a while, but then in the end after he went to Mecca and adapted his belief system to be more inclusive, he turned out alright.

If you’ve studied sociology or history, you probably know that this kind of categorization is fairly typical of anyone doing anything militant. The idea is that it’s acceptable to be outspoken in your early days as long as you calm down later in life.

Like other interesting people throughout history, Malcolm was a seriously complex guy. I hesitate to categorize him one way or the other in a short blog post, so watch this video to get a few snippets of the early, militant side:

It was extremely unusual for a black leader to criticize President Kennedy, but here Malcolm calls him a “trickster” and accuses him of helping “everyone except the people who put him in office.”

Here’s another clip, following Kennedy’s assassination and a 90-day period of silence that Malcolm was subjected to –

This one includes one of my favorite statements. When the interviewer asks him if progress is being made, Malcolm says:

I will never say that progress is being made if you stick a knife in my back nine inches and pull it out six inches… there’s no progress. If you pull it all the way out, that’s not progress. Progress is healing the wound that the blow made, and they haven’t even begun to try to pull the knife out. They won’t even admit the knife is there!

And finally, watch this last one from towards the end of his life, after he had left the Nation of Islam and returned from a trip to Mecca —

In this clip, Malcolm discusses meeting white Muslims for the first time, his split from the Nation of Islam, and the threats on his life. “I have no fear whatsoever of anybody or anything,” he says at the end.

We have a lot to learn from people in history who have fought against the status quo under challenging circumstances. The case of Malcolm X is especially interesting, since at times he dealt with several different battles simultaneously. Even now, his role in the Civil Rights Movement and American history in general lacks consensus.

In the end, Malcolm X was a modern-day Julius Caesar, murdered by the same people who helped him get started as a spokesman. Just imagine: Not only are you fighting for equality and justice, you also have to deal with mainstream black leaders who say they disagree with you… and then you find yourself being accused by the same group you tirelessly supported for years. (Talk about being alone.)

Muhammed Ali, a former friend and apprentice, refused to shake his hand or acknowledge him when they were both in Africa at the same time. (Talk about rejection.)

And when you talk about sacrifice, Malcolm X walked the walk, showing that there was more than one way to fight against injustice. I’m grateful for people like Malcolm who were willing to give so much for equality in my country.

The United States, and probably the whole world, is much better off because of his courage and service. I give respect!