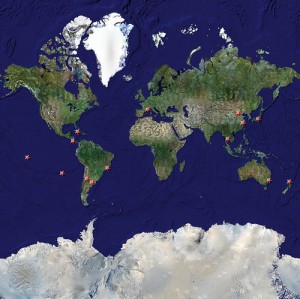 As I finished up last year’s Annual Review, it became clear that 2010 was going to be even more of a monster year than 2009. I’ve got a ton of things going on, which is great, but I also need to keep working on my quest to visit every country in the world.

This is my “travel accountability” post – it’s safe to say that if you don’t care about trip planning, you don’t need to read it. Everyone else, read on…

Last year I wrote the original Advanced Travel Planning article, where I outlined the next few trips I planned to take. This time I have two major challenges:

1. I need to visit 20 new countries before September (from September-December I’ll be traveling only in the U.S. and Canada for my book tour). This effectively lops off a whole quarter of potential trips.

When I first started thinking about the year ahead, including the imperative to get to 20 new countries before September, I said to a few people that 2010 has too few months. I can’t add any months to the year, unfortunately, so I’ll just have to get creative and more strategic about the trips.

While on vacation in December, I set aside an entire day during Christmas week to make as many trip plans as possible. During this day, I planned the following tasks:

And so on – you get the idea. I spend hours and hours working on tasks like this throughout the year, but I’ve never devoted a whole day to the planning before. It was a good idea.

For the first time, I drew up a list of countries I hoped to visit this year. For no good reason, I’ve been paranoid about doing this before, but being strategic requires a target list defined in advance. Here’s the first two-thirds of the list:

(As you can see, not every country is “difficult”—for some reason, I’ve yet to visit Norway, just as I haven’t been to the entire continent/country of Australia—but keep in mind I have to plan for each country in coordination with all the other trips and stopovers.)

A Few Notes on the Next Few Trips

I’ll be in Asia at least twice, but it’s tricky because I’m almost out of “new” Asian countries. With the exceptions of the -stan countries in Central Asia, it’s a short list. I need to visit East Timor and Papua New Guinea, two countries that are logistically challenging, and I also need to get to the Maldives, which is several flight hours away from every country except Sri Lanka.

I went to Thailand, Cambodia, and Laos around this time last year and really enjoyed being back in the region after a long absence. This time, I’ll be in Bangkok for several days in mid-February for meetings and the entertaining “dodge-the-traffic” running game I like to play there.

This trip is booked completely on my OneWorld itinerary I purchased last year. I might reroute part of it, but the itinerary is currently set up as follows:

Highlights include my final stops in Central America (Guatemala and Nicaragua), and a trip to the divided country of Cyprus where I hope to visit both the Greek side and the Turkish side.

This itinerary then continues on towards Asia, although I’ll be coming home again after that portion and saving the Europe–>Asia portion for later.

I try to visit Africa at least once a year. Last year I ended up in Namibia and Swaziland, where I also traveled overland in a bush taxi to Mozambique. This time I’ll be entering the continent via Cameroon, heading down to Gabon on an overland journey, then over to Malawi via South African Airways. Since I’ll be based in Johannesburg for at least one layover, I’m also hoping to head to the island of Madagascar on an awards flight.

If I really want to outdo myself (but also make it to another faraway country, thus saving the need to fly back there later), I’ll look at adding on Comoros or Seychelles while I’m in Madagascar. We’ll see.

Aside from Hawaii, New Zealand, and the Cook Islands, I haven’t spent much time in the South Pacific at all. It’s a big place, and there are eleven countries there. I’m a bit intimidated by the distance between them, but I need to get started on the region.

I made my first major trip last month, to Tonga, Samoa, and Fiji. Alas, at least one (possibly two) additional countries eluded me while I was in Fiji—so I’ll need to go back at some point.

Travel tip: As mentioned at the time of booking, the South Pacific is a great region for awards travel. I booked my trip directly to Auckland (with a free stopover), then to the island nation of Tonga, then over to Samoa and all the way back on a single award. You can also travel on a similar itinerary via North Asia (usually Japan) and get another free stopover that way.

The second Pacific trip will begin in Guam (not a country, but an interesting place nonetheless) and continue to the Federated States of Micronesia, then hopefully on to the Marshall Islands and / or Nauru.

As a relatively simple trip, I plan to arrive in Vilnius, Lithuania, get oriented for a few days, and then travel by bus to Minsk, Belarus. The latter country has a reputation for being obstinate, so I’ll probably need to arrange my visa in advance. I used more Star Alliance miles (80,000) with U.S. Airways to book this trip, including a free stopover in Vienna.

While I’m out and about, I’ll need to see about a few overland trips and paid flights to the other countries. I can hop up to Norway from almost any other European country. I might be able to visit Algeria or Morocco while transiting in Paris or Madrid. It’s helpful to plan for side trips and stopovers when visiting other places along the way — this is a key part of my strategy to reduce costs and time away from home.

I need to go to NYC to meet with my publisher at some point, to Austin for SXSW in March, and a couple of short trips for speaking gigs — but otherwise I’ll be home in Portland when not elsewhere around the world.

Then in September, the domestic adventure begins… all fifty states, plus two stops in California and Texas, plus Washington, D.C. — followed by 10 additional stops in every Canadian province for a total of 63 reader meetups in 63 cities. This will be a major undertaking involving volunteers at each stop.

(Stay tuned for all the details on the Unconventional Book Tour. I’m actually scared to death about putting this whole thing together, but more on that later.)

I know it’s a fairly aggressive itinerary, but it’s a fairly intensive year all around. I’ll be using at least 400,000 Frequent Flyer Miles and spending several thousand dollars in cash for the first few big trips I’ve booked. (Thank God for miles – it would require much more money to do this any other way.)

Anyway, I’m looking forward to the challenge. Let me know if you have any questions about the logistics – I’m happy to help other travelers whenever I can. Here’s to a travel-happy 2010!

Are you going anywhere this year? Feel free to share your planned trips.

How to Use Frequent Flyer Miles for Low-Cost, High-Value Trips
© 2023 The Art of Non-Conformity | Site by Bytegrow Technologies