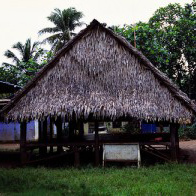 My first observation on the region known as Micronesia is that it takes a long time to get there. With forced layovers, I’ll finally arrive at stop #1 after 40 hours of travel—and I’m starting on the West Coast!

Fortunately, I love travel and I’m excited. This is going to be a fun trip.

Micronesia is both a country (The Federated States of Micronesia, to be precise) and a region. The broader region of the South Pacific is a laid-back place, but can be difficult to hop around due to limited flight schedules. Until now, I’ve only been to Hawaii, New Zealand, the Cook Islands, Easter Island, Fiji, Tonga, and Samoa.

This leaves many unvisited islands, and the following islands that are also countries: Kirabati, Tuvalu, Federated States of Micronesia, Marshall Islands, Palau, Nauru, Vanuatu, Solomon Islands, and… wait for it… Australia.

Note: this map is somewhat inconclusive. Guam and Nauru aren’t listed, for example—but hopefully they exist, since I’m flying there next week.

For some reason, I still haven’t been to Australia. I had hoped to visit later this year for a full book tour to every state (there’s only six, so it’s easier than the U.S.), but it didn’t work out.

This time I’ll technically be in Australia due to a quick transit in Brisbane, but I’m not counting that as a real stop. Everyone down under, I definitely hope to make it in 2012 as part of the next, fully international book tour.

Most of my time will be spent on the islands, beginning in Majuro, the capital of the Marshall Islands. I’ll then continue to Micronesia itself and (eventually) Palau. Before continuing on from Palau, I took advantage of a lull in flight schedules to book a side-trip to Tashkent, Uzbekistan. Getting to the “stan” countries can be a challenge, and I’ve only been to Afghanistan and Kazakhstan so far. After Uzbekistan, I’ll still have a few tough “stans” left—Tajikistan, Krygystan, and xxcvadfadf-stan (Update: actually known as Turkmenistan).

Also, even with two weeks in the region, I still can’t get around to all the islands that are countries—I’ll need at least one more extended trip back to Fiji and Brisbane to polish off Kirabati, Tuvalu, the Cook Islands, and Vanuatu.

Getting There And Around

I’m starting out on a Continental award ticket to Majuro, then moving to a string of one-way tickets down to Palau (via Micronesia and Guam). The Uzbekistan side-trip is with a Delta awards ticket (PNI-NRT-ICN-TAS-ICN). The trip to Nauru is through Brisbane (via HKG).

When I finish my two weeks of island-hopping, I’ll head home and start planning the next trip. All’s well on my country quest—eight years in and I’m now at 163 countries down, 30 to go, with 16 months remaining. After staying (mostly) at home to write my book and host the 2011 World Domination Summit, I’m now firmly back in travel mode.

Wherever you are in the world, I hope all is well.

Travel note: I work from everywhere, but responses will be delayed on this trip due to expected internet challenges.