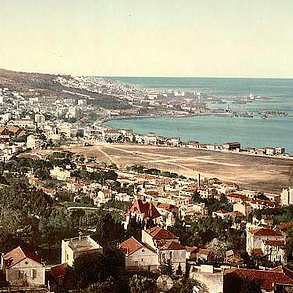 This one came down to the wire. I left PDX a week ago, not knowing where I’d be seven days later. All bets were on Algeria—I had a confirmed hotel reservation and a non-refundable plane ticket. What I didn’t have, unfortunately, was a visa.

The embassy in D.C. kept stalling, asking for a notarized letter explaining I was really a tourist and not a spy, then waiting for approval from Algiers itself. But while I was in Belarus last week (more on that in a moment), they came through in the proverbial nick of time. My visa service, which will probably charge me double next time since I pestered them so much, agreed to FedEx my passport to Frankfurt. I flew from Minsk to Frankfurt, landing at 7pm and getting to my hotel an hour later. I had visions of the hotel clerk saying, “No sir, there’s nothing for you here”—but in fact there was a FedEx letter, and in fact it did contain the passport and visa. The next morning I went to Madrid, and then on to Algiers.

If you have what I call a “rich country passport” (USA, Canada, UK, EU, Australia, etc.) then you don’t have to worry about needing visas for about half of the countries in the world. The trouble is, those are the easy countries. Going to the harder ones almost always requires a visa, sometimes obtainable upon arrival for a fee, but many other times needing to be arranged well in advance.

I started traveling eight years ago because I loved to travel, not because I ever expected to end up on this crazy adventure. But now that I’m down to the final fifty, with a bit more than two years to go, I already know that I’ll have to become more deliberate in planning my trips. Like everything else, it’s a work in progress.

Until this week, I thought African governments were the most obsessed with paperwork (I once visited an office in Sierra Leone where papers were “filed” by stapling them directly to the wall), but now I know that Africa has nothing on Belarus. I had to fill out reams of papers before applying, still more before being accepted, and even more upon arriving at the airport. By the time I finished, I worried I had taken on a new citizenship or something.

I never really figured out why my two previous attempts at visiting the country failed. The service I used (a Belarusian one, naturally) just kept coming back with more and more problems. For this attempt I switched services, and that proved to be the right idea—though it was still not without difficulty. A highlight of the problems I had with the better service is outlined below.

Problems in Applying for a Belarusian Visa

4. Digital signature not accepted on application.

5. Real signature must include each letter of name.

6. Real signature must be in black ink! No other color!

7. Visa card accepted for Canadian applicants; Americans must use only Mastercard.

8. Blue-colored Mastercards are not accepted (“image too dark for bank.”)

For each of these infractions, my application was sent back by the service for further revision. I finally got it right, or they finally realized I wasn’t going to give up, and I received the third batch of papers to be handed in at the airport. Arriving in Minsk last Tuesday, I dutifully turned in all five of these papers, but apparently there was a missing sixth one, for which my visa service was berated on the phone by the officials while I waited.

Then, Belarus set a new record in my 150-country journey: World’s Most Expensive 30-Day Visa. I was expecting it to be $125, but apparently that was last year’s price. This year’s price, as part of a special offer for U.S. citizens only, is $420.

Yep, $420—payable only in cash (the Mastercard charge was for the visa service, not the visa itself). I usually travel with about $1,000 in new hundreds and twenties, but this time I failed to take my own advice and had only $500. You’d think $500 would be enough for a $420 obligation—but no. Each bill is carefully inspected by a cadre of officials, and because some of my bills were a bit older, they were declined. Of my $500, $300 was deemed acceptable, but I would need to pay the remaining $120 some other way.

I had about €200 with me as well, so I asked if I could pay the balance with that. Nope—I could pay in dollars or euros, but not $300 in acceptable dollars and the equivalent of the remaining $120 in euros. So much for that plan.

I looked through the stack of rejected dollars. “Hmmm, this hundred looks pretty good to me,” I said, which they ignored. Nice try. A Lebanese guy waiting beside me with some other visa problem kindly offered to help. “I have some dollars I’ll trade you for,” he said. We checked with the officials and they turned out to be acceptable dollars. Great! Except… he only had $60 to trade. I made the trade and thanked him, but was still another $60 short.

In the end, the officials decided to send another official to accompany me through the immigration area without actually clearing immigration. (The other official had been busily reading the newspaper the whole time I was trying to pay, but he was a good sport about putting it down.) On the other side, where I’d be in Belarus without actually being in Belarus, we’d go to an ATM together and get the rest of the cash. We did that, but the machine didn’t like my card and refused to cooperate. Then we walked through the whole terminal to find another machine… with the same result. Finally, we walked through the other side of the terminal to find an actual bank. Could the bank use my debit card to withdraw the magic $60? Alas, they could not.

Belarusian Official and I hung our heads low and returned all the way back to the immigration office on the other side of security. “ATM trip fail,” he said to his colleagues, or at least that’s what I imagined he said. Expensive visa fail, I was thinking.

Belarusian Official and I traipsed back to non-Belarus on the other side of security, then wandered down the corridors and up the stairs to the bank we had visited half an hour ago. Would our mission finally be a success? My heart sank as we approached the bank and the window was closed. Oh no!

To my eternal gratitude, I was rescued at this point by my friend the official, who I think was tired of doing so much walking. Belarusian Official knocked on the window and said “Open this f—ing window so I can go back to reading the paper”—or so I imagined. I’m not really sure what he said, but the window did open and a man did appear who was willing to exchange money. It’s always the small victories, yes?

Belarusian Official and I walked back to the immigration office, where I presented a grand total of $420 in acceptable dollars with a flourish. The officials pasted the visa into my passport and stamped it. I’d love to tell you a cheer went up, but this seemed more like the daily state of affairs in Minsk.

I could go on (and on…) about the situation—these are just the high points of a three-hour wait. The most interesting thing about the whole experience was how friendly everyone was. It was like they were combining Russian rules with African hospitality. The guy who gave up his newspaper-reading job to march me back and forth between the immigration office and the various exchange bureaus was very nice about it. He spoke a small amount of English, and I shared most of my limited Russian vocabulary with him (highlights: hello, thank you, airport, sorry, beer, vegetarian). The staff told me to leave my bag unattended for more than half an hour during one of the failed money-collecting attempts, and I didn’t even feel anxious about walking around without it.

After it was all over, the main official even smiled at me and said “Welcome to Belarus.” I thought that was nice. Half of the time when I come back to the states, the immigration guy doesn’t even say “Welcome to America,” which annoys me because it’s such a small thing to do that can make a big impression. Belarus was maddeningly difficult with all the bureaucracy, but no one was rude. Throughout the whole time I didn’t feel intimidated, worried, or stressed. (Though I was certainly tired—there is no JetBlue service from Portland to Misnk, and I hadn’t slept much the two nights before.)

Meanwhile, my driver was waiting outside, chain-smoking and looking bored. I apologized for the delay, but it didn’t seem like it was that unusual for this to happen. The car radio alternated between Russian rock and Phil Collins. “It’s just another day in paradise,” Phil sang as the driver took me to Hotel Planeta in the heart of central Minsk, 40 kilometers away. The driver smoked and I dozed off intermittently while looking out the window.

I’m not sure it’s paradise, but Belarus is an interesting little place. The rest of the trip, I walked around the city and went running in a big park. I took long naps but tried to avoid the dreaded eight-hour nap that begins at 2pm in the afternoon and leaves me wide awake with nothing to do all night. Not being able to converse with most people in a place like Belarus is sometimes difficult, but it also lends well to writing, thinking, dreaming, and walking. I like all of those things, though I could have done with a little less walking in the airport itself.

I’m writing you now, a few days after this experience, from Algiers in North Africa. I made it! Here in Algeria it seems all the bureaucracy happens in the beginning. Once you have the visa and show up, it’s an easy two-minute immigration queue with no questions asked. And yes, the guy said “Welcome to Algeria,” or in this case, he said “You are welcome,” which is always nice to hear when visiting a foreign land.

I haven’t seen much of North Africa yet, partly due to the security situation. In places like this, Westerners tend to congregate at resort hotels that offer everything except culture. This afternoon I’ll escape from the hotel compound and head out to see as much “real Algeria” as I can. After a few days here, my next stop is Chiang Mai, Thailand. After that I’ll head home, and my global wandering will be curtailed for several months as I pursue a different adventure.

Internet in Algeria is not cheap, but that’s OK because I need to get outside and remember why I travel in the first place. It’s not necessarily to deal with bureaucracy and listen to Phil Collins in Belarus. It’s not for the “Striptease Special” on offer at the Hotel Planeta, or even for the sun and sea in a place like Algiers. It’s more for my own internal motivations, which I don’t always claim to understand myself. But it makes me happy, so here I am.

Travel tip of the day: be sure to apply early if you need an Algerian visa, and be sure to bring plenty of acceptable dollars if you end up in Belarus.