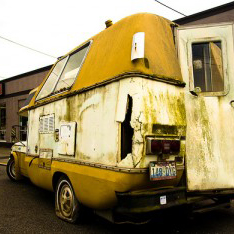 Twice in the past two months I’ve tried to make it to Belarus, and twice I’ve failed.

The first time I was volcanoed, stuck in Vancouver and unable to fly to Europe. This time, I was stuck in Zurich, shut out by a Kafkaesque visa system that denied me entry one day before I was supposed to arrive.

Like Vancouver, Zurich is a nice place to be stuck, but I would have rather made progress on my goal. I still made it to Lithuania as planned, so at least I’ll get three new countries on this trip after spending last week down in Africa. Belarus—I’m not finished with you. I’ll be back for a third (hopefully final) attempt at some point later in the summer.

This is the Sunday Store Update. I use this time to share some brief news about the business side of AONC. Today’s news is about my impending upcoming retirement. Yes, friends, in my advanced age I’ve decided it’s time to pack it in and retire to a life of channel-surfing from a large RV.

Or something like that. Since last December, I’ve said that the first half of 2010 would feature an intense business development schedule as I build out the store. It has indeed been intense! And it’s not over yet.

After I return from my latest trip, I’ll relaunch the famous Empire Building Kit for the third and final time. Following this launch, it will then be available on an ongoing basis in the shop. Presumably, everyone who gets antsy about my 24-hour launches can rejoice in this development.

Next, about two weeks later I’ll release the Unconventional Guide to Freelancing—a project that’s been in the works since early January. These two launches are coming a bit closer than I would normally prefer, but for a good reason: they are the last business launches of 2010. I’m not actually retiring from life or writing, but I am retiring from active business development for about five months. From July-December, the majority of my focus will be on the launch of my first print book and three month book tour.

Instead of making money with Empire Building, I’ll be spending money as I travel to all 50 U.S. states and all 10 provinces in Canada to meet readers. I’ll also be announcing the date and registration site for next summer’s big World Domination Summit, which will be like 60 meetups all in one from my hometown of Portland, Oregon.

I’m really excited about both of these events, and as soon as the store is fully developed for the rest of the year, I’ll completely shift the focus over to them. For now, I’ve got the two big business projects planned for the next few weeks. Next Sunday: news about “Revenge of Empire Building Kit.” The week after that: news about the freelancing guide.

Alright, so Belarus didn’t work out, and Equatorial Guinea had $500 hotel rooms—but let me state for the record that I found Lithuania to be a beautiful, magical place. I’d love to go back and I intend to. Then I stopped off in Singapore on my way home and enjoyed the nostalgia of visiting a familiar hub. So all things considered, I’m still going strong, and I hope you are too, wherever you are. Thanks for reading.

End of the Discount Airfare Guide