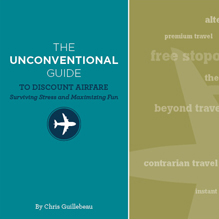 Greetings from my corner of the world, also known as 97214 in the great city of Portland, Oregon.

The other day at my neighborhood Starbucks, I saw a guy in a torn Slayer t-shirt helping someone with their taxes. The fact that this sight wasn’t that unusual to anyone else in the coffee shop offered another good reason for why I like living in this city.

It’s time for the Sunday Store Update. I use this time every Sunday afternoon to write a brief update about the small business I’m building.

This week the news is that I’ll be taking my original Unconventional Guide to Discount Airfare off the market in a few days. It’s been a great product and has helped a lot of people for a super-budget price, but its natural lifespan is coming to an end.

When I launched the Discount Airfare Guide in the summer of 2008, I had an idea for a small information business, but I wanted to test the waters before I got serious about it. At the time I knew how to create products, and I was building a new career as a writer, but I wasn’t sure how to integrate the two activities.

Every day people were writing to ask me more about how I booked my plane tickets and how I was able to travel so affordably. After answering hundreds of individual emails, I decided it was better to create a medium-length report that offered a comprehensive overview. I’d offer the report for sale at a reasonable price for those who wanted it.

Before I put it out there, I honestly wasn’t sure if it would be a success. “Blog readers are picky,” I heard from several experts. “Just because they read your posts doesn’t mean they want to buy something.”

Well, I think that advice holds true, but I also think it’s true that when you give people what they want, enough of them will buy. After I sold $1,000 worth of copies to a small audience on the first day (I think the readership was just about 2,000-3,000 subscribers in those early days), I knew I was on to something.

After the launch, a number of fellow marketers offered critiques on how I could have done it better. The comments included observations like a) it needs a sexier title, b) don’t call it an ebook, c) sell the benefits more than the features, and so on. For the most part, all of these observations were technically correct. As I said at the time to everyone who offered unsolicited critiques, you guys are right, but isn’t it great that I can sell $1,000 in one day to a small audience with a new blog and a no-hype launch? To me, that was a big success.

I was also thinking of two things:

#1: The Asset. One of the reasons why selling valuable information is such a great business is that your product (my guide, in this case) can go on selling passively every day after the launch. More than a year later, the airfare guide isn’t a huge seller, but it does still sell at least a few copies every week with no promotion. Even as the lowest-priced product with a landing page that hasn’t been updated since I first wrote it, I’d say it brings in about $500 a month that I don’t really have to do anything for.

#2: The Future. In addition to the passive income produced by that guide over time, I was also thinking about the future. Since I now knew there was a market ready to buy valuable information, I could develop more detailed materials that could sell to more people and for slightly higher prices.

In other words, I could slowly and carefully build out a real small business to support myself through writing, which is what I did over the next few months. It’s still in development, of course, but as I wrote in the 279 Days report, this “very small business” is now the source for the bulk of my income.

The biggest decision I had to make when launching the first guide was pricing. I asked for input from several bloggers I respected, and the input was all over the map. Right before I launched, one person told me, “You are new to the marketplace, so don’t price above $14.” That kind of scared me a little– I didn’t want to charge a fortune, but I also didn’t want to go after the low-end market. I decided to price at $24.95, much lower than I knew it was worth, but still low enough to allow me to test the waters.

In retrospect, I think I was right about the pricing not because I knew blogging better than the experts I asked (they certainly had me beat there), but because I knew marketing and product launch strategy a bit better. I knew if I priced at $9.95, for example, it would be hard to build a real business from there.

The most interesting and unexpected lesson I learned from this launch is that the lower I decide to price something, the more resistance I’ll encounter. Strange but true. When I launched the airfare guide I heard from a fair number of people– none of whom purchased it– that the price was too high. “$25! That’s so expensive!” one of them said in the comments. (Never mind that dozens of buyers were reporting savings of $300 or more on their plane tickets.)

Ironically, I now create products that sell for well over $24.95, but I receive very few complaints about the price. I think part of the shift is related to how I write the landing page and pre-launch materials, but I also think it is because pricing determines market and vice versa.

No offense, but I really don’t want buyers who complain about a small investment in something that takes dozens of hours to produce. If you have a business, I think it is almost always better to create your own value proposition and therefore your own market. As long as you feel confident about the value, don’t be put off by people who say the price is too high.

If no one buys it, of course, then they may be right. Otherwise, don’t worry about it.

As mentioned, the product was good (and still is), but it’s coming to the end of its lifespan. I want to continue building more comprehensive resources that go beyond a basic report. I don’t feel like I need to compete on the low-end market, so I’m not going to try.

It’s been a great guide, but it’s time to say goodbye. I’ll be integrating some of the content into an update for Travel Ninja, a more comprehensive product, and my next guide will be all about Frequent Flyer Miles – so I don’t need to have three different travel guides.

Anyway, the original Discount Airfare Guide is still available now for the budget price, but I’ll remove it from the store by the end of the week. Check it out here if you’re interested.

I hope all is well with you, wherever you are. Remember, if you want your taxes done by a Slayer fan, Portland, Oregon is the place to be.

Can You Visit Bora Bora on a Budget? Sort of—Here’s How.