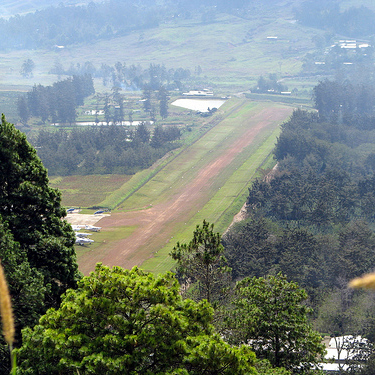 You appreciate the big cities. Tokyo, Hong Kong, London—all of these you visit often and love well.

But sometimes, your adventures take you further afield. You fly to a big city, then to a smaller city, and eventually on to an airstrip that could be anywhere. Stepping off the rickety commuter-jet stairs into the void, you’re tempted to shout in expectation of an echo.

It’s hard to explain to those who aren’t similarly addicted why you would go to the ends of the earth for such a moment. Coming back from Comoros, a small, island country in the Indian Ocean, I took the Madagascar Milk Run. My flight to Comoros was direct, but getting back required a shuffle through what seemed to be every airport in Madagascar.

After a three-hour ground delay in HAH airport, we finally left for Madagascar stop #1, which I believe was the small city of Mahajanga. I was the last person to board the crowded flight, sleep-deprived as usual. I accepted a box of sugar water disguised as orange juice, looked out the window, and dozed.

I knew to expect one stop before arriving in Antananarivo, the capital, but I didn’t know there would be three. Since the first one was the first point of international entry to the country, everyone had to get off the plane with their belongings. Immigration was easy enough, and I schlepped over to the domestic terminal for the onward connection on the same plane.

Unfortunately, there was some confusion about my travel plans from Mahajanga to Antananarivo. “You’re not on the manifest,” a clerk told me. “I was just on the previous flight and I have an onward boarding pass,” I said, not backing down.

This went back and forth for a while. In travel, you must follow the Kenny Rogers rule—know when to hold ’em and when to fold ’em. In this case, I wasn’t folding. If you stand in one place at the airport counter, eventually they get the hint and things start to happen. After a bit more waiting, I received a new boarding pass and joined the remaining passengers in the departure lounge.

We walked back on the tarmac, up the rickety stairs, then flew on to another city with another dusty airstrip. Everyone had to disembark again, even though this was now a domestic flight and they weren’t refueling. I wandered to a sleepy transit area and dozed for another twenty minutes.

Back on the plane again. The same endless saga, the same “Where is your boarding pass? I don’t see you on the manifest” and the same hurry-up-and-wait process that every traveler knows well. The milk run came to a conclusion when I finally made it to Antananarivo, exhausted but high on travel. I hired a cab and rode forty minutes to my hotel.

After setting down my bags, I wander the streets to a Thai restaurant with a doorbell that announces the arrival of each customer. The fact that a man is employed solely to ring the doorbell announcing each patron seems entirely appropriate for some reason. I settle into a chair and look at an enormous menu as they bring me peanuts. Whitney Houston is playing on the stereo, where all of her dreams are a heartbeat away and the answers are all up to her.

Inside, a flank of nine staff members stand on guard near my table… but only one of them does everything. The same person takes my order and brings the beer, while the other eight stand in one place the whole hour.

I drink the beer, which is cheap, local, and good. I’m reminded of the rule that to be a country, you must first have a national airline and a national brewery—after that, you can figure out things like governance and electricity. (Look out for “South Sudan Airlines,” coming soon to the world’s newest country.)

My noodles arrive, brought to me with a smile by the same guy who greeted me and brought my peanuts. I look back at my flank of nine waiters. Is it a lottery? Did the guy who does everything draw the last straw? Do they rotate responsibility every night?

On one of the milk run stops, I was informed by a sign in the tiny airport that the #1 “core value” of the baggage handling company was “smiling.” On-time baggage delivery was #3.

This, I thought, was a good representation of traveling in this part of the world. You might lose your bags, you might not get a boarding pass for a confirmed ticket, and it might take a while to get home—but eventually, nine people will be summoned to do the work of one in serving you, and they will all be smiling.