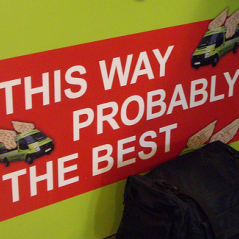 By the time I got to the check-in counter at PDX airport this morning, I knew I’d go through with the plan. PDX-DEN-FRA to start with… but then what? I wasn’t sure.

“Will you be traveling on from Frankfurt?” the United agent asked.

This is a polite way of saying, “When will you be leaving the European Union?” – to ensure I don’t decide to take up residence in Germany.

“I’m going to Belarus the same day,” I told the agent, and showed her the other ticket to Minsk. “Great,” she said, and printed my boarding passes.

So now I’m writing from the terminal, and waiting to board my first of four flights. The problem is, I don’t really know where I’m going. Yes, I’m off to FRA, and then to Belarus (finally! attempt number three) for a couple of days. But then I get back to FRA, and I’m not sure what will happen the next day.

I have a ticket for Algeria and a hotel reservation in Algiers, both of which were required to apply for a visa in Washington, D.C. two weeks ago. The whole point of this trip is to go to Belarus and Algeria, two countries that are relatively difficult to get to. The problem is, I still have no Algerian visa, and my duplicate passport is still in Washington as I fly off to Europe with my regular passport.

Two weeks ago I dutifully applied, and apparently my application wasn’t good enough on its own, because I was then asked for a notarized letter saying… basically the same thing that the application said. Frustrating, but I can work with that. I got the letter, FedEx’d it back to Washington, and kept waiting. But last week, still no news.

Thus I came into my latest quandary as I attempt to roam the world, going to harder and harder countries that all have visa issues like Algeria. I also have plans to stay completely in the U.S. for four whole months starting in September, so there’s not much room for error in the travel schedule.

By the way, before someone tells me, I’m already aware that the U.S. does not make it easy for foreigners to visit. If I could change that, I would, but my influence with Hillary Clinton is minimal. I wasn’t even invited to the wedding!

Anyway, after I heard that I wouldn’t get my visa on Friday, I thought about options over the weekend. What to do? Here’s what I considered:

Hope for the best. This is what we’re working on now. Technically, the embassy could still come through today or even (fingers crossed) tomorrow. In that case, my visa service is going to attempt to FedEx the passport to my hotel in Frankfurt. Under this scenario, I’d get it Thursday night at the hotel, and then 7am Friday morning I’d be off to Madrid and Algiers for the weekend. Very tight! But it’s my best hope.

Cancel the trip. But this is my last chance to travel overseas for a long time. I don’t want to rebook for the end of August, because I’ll be getting ready for book tour mode then. It’s pretty much now or never, and I have to try to make a good use of the limited travel time I’ve allotted.

Reroute the Lufthansa ticket. This is the same ticket that I already rerouted to go to Thailand—next week’s stop before coming home. If I could do it, I would, but the problem is the same… no visa to go anywhere. I checked into several African countries, another Central Asian country like Uzbekistan, even Yemen—all with no luck.

Go somewhere else in Europe. The problem with this option is that I’m running out of new countries. In Europe, only Norway and Monaco remain. Out of 149 countries so far, Norway is like Australia—for some reason, I’ve just never made it there. I’m thinking of saving it for country #192 in 2013, so Norway is off the list for now.

Monaco is easy; just a quick hop to the south of France and then a 30-minute bus ride to Monte Carlo. But the thing is, I’m also trying to save a few easy countries for the next two years, so hopping over to Monaco doesn’t seem like much of an accomplishment for this trip.

Of course, I could also take a short vacation—head to Amsterdam from Frankfurt, perhaps. But as much as I love Amsterdam (or wherever), that isn’t really the point of this trip. I’m on a schedule and have to use the time well if possible. So if I can do that somehow, I will. Otherwise, well, I guess I’ll eat some stroopwafels.

I’m flying to Denver in a few minutes, then on to Frankfurt. It does feel a little odd to not know where I’ll actually be going on this trip after the next few days. But when I thought about canceling the trip, forfeiting the ticket I’ve already purchased for Algeria, I knew I’d have to follow the path and see where it leads.

Besides, I write about risk and adventure, so I do try to walk the walk. To Germany and beyond! Well, hopefully beyond. I’ll find out in a day or two where “beyond” actually is.

Would You Pay $60 to Sit in a Hot Tub? First Look at the First Class Al Safwa Lounge in Doha, Qatar
© 2023 The Art of Non-Conformity | Site by Bytegrow Technologies