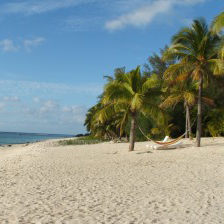 If you read last week’s post, you pretty much know how this trip came out of nowhere the week prior. Air New Zealand phoned me up, offered me a trip, and since it sounded fun, I said yes.

Despite it being such a far distance, this was one of the easiest trips I’ve ever prepared for. I was only going to one place (usually I go to several), I’d be gone for less than a week, and, for the first time ever, someone else was arranging my lodging and other logistics.

In other words, my preparation consisted of 25 minutes of packing on Sunday afternoon before riding the train to the airport. Super-easy. If anything, I overpacked, since I only needed two outfits.

I flew United down to LAX (it wasn’t that bad, but I have low expectations for most U.S. airlines) and connected to Air New Zealand – more on that in a moment.

About the Cook Islands

The Cooks consist of 15 small islands in the South Pacific, with Rarotonga being the capital and largest island. There are currently no franchise properties anywhere on the island, a fact that the local hospitality reps are proud of. In addition to a plethora of scooters, there are two buses that travel back and forth along the main road, designated as “Clockwise” and “Anti-Clockwise” to help keep you oriented.

Sometimes people wonder how much you can see of a place in a relatively short time. I always answer that it depends on the place and what you actually do. In the case of Rarotonga, I feel like I was able to see quite a lot. We had an island tour, harbor visit, lagoon cruise, mountaintop trek, various dinners with people who live there, and a hotel located right on the beach. In a place like Rarotonga, those are pretty much the highlights, and as much as I like to travel independently, I probably wouldn’t have done all of those things if I was on my own.

I’m much more of a city person than an island lover, but I liked the Cooks better than most Caribbean islands I’ve been to (about 15 so far) and certainly better than Hawaii. There’s not much left in the world that remains undiscovered, but if you’re looking for relatively unspoiled, the Cook Islands are a great choice.

In addition to the New Zealand journalists who came along to cover the event, a number of U.S. and Canadian travel writers were also along for the fun. Since this was the first time I’ve been to this kind of thing, I was curious to hear more about how it works for them. They told me stories of going to exotic destinations every couple of months with all expenses paid. One guy said he had been to India five times, but didn’t feel like he had really seen it because each trip was a junket. Another guy told me that the city of Cleveland kept calling him up, trying to get him to come out and write about them. No offense to anyone living in Cleveland, but I don’t think that’s an offer I’d accept.

Normally I pay my own way everywhere I go. It was a little unusual to go to dinner at nice restaurants where everything was paid for by sponsors. The upside of this experience was free cocktails and bottles of wine that kept reappearing at the dinner table. The downside was loss of freedom, and for me, that’s a big downside.

I think it would be easy to adjust to this kind of travel if it’s all I did, and to be honest, I don’t really want to adjust. In the end, freedom is worth more than free wine. This is not really a criticism of traditional travel writers; just a differentiation. I’m doing something completely different that isn’t really comparable to what they do.

Before the trip, Air New Zealand asked if I’d consider writing about their service when it was over. Keep in mind my first-ever writing disclosure – they brought me over and paid all expenses – but they also made it clear that this was optional and I could say whatever I wanted.

In the Koru Lounge heading down, (LAX Terminal 2), the service was great – I had a reserved table when I showed up after walking across the street from United’s Terminal 7. No Sauvignon Blanc had been reserved for me, but I managed to reserve it myself by visiting the complimentary wine bar. I picked up a copy of the New Zealand Herald before heading out on the flight.

On the first ANZ flight (LAX-RAR), I wasn’t that impressed. The Business Class seats were the older style, and the service was a bit abrupt. At the same time, transferring to any decent airline from a United Airlines connection is kind of like checking into the worst hotel in Guyana after sleeping in a Haitian guest house – it’s definitely a step up. I stayed up for most of the overnight flight and watched New Zealand sitcoms to acclimate myself. (Kiwi readers, I’m now quite familiar with the antics of Jacqui Brown and the interesting career of the Topp Twins.)

I arrived in Rarotonga at 6:00 a..m., and things got better on the ground. The local Cook Islands Tourism staff had joined up with a couple of people who came over from Auckland to arrange everything. As mentioned, I don’t think I’ve ever been on a trip where I didn’t have to think about paying for my drinks and dinner – that was definitely nice.

The flight back home went via Auckland, and I traveled halfway with a couple of journalists based in New Zealand. All three of us were given seats in a Business Class service that I found to be a lot better than the longer service from L.A. Four hours later I wandered for half an hour in AKL airport, popped into the Koru Lounge (it’s appropriately comfortable), and got on the plane for a 12 hour flight back to the states.

Before transferring to United Economy Class for my final connection, I got to fly in Air New Zealand’s nice long-haul Business Class product. This product is based on the style pioneered by Virgin Atlantic a few years back, where each Business passenger gets their own lie-flat bed and panel dividers that provide more privacy than most other cabins. Check out the photo tour to get an idea of what it’s like, and remember that these seats usually go for thousands of dollars each way.

A big thanks to Karen, Tracy, and other Air New Zealand staff who helped to organize the trip. They did a great job.

Overall, I had a good time on the trip. I’m not ready to jump on a plane to Cleveland, and I don’t want to make a career out of these trips – but I think if the right opportunities came along, I’d be up for checking them out a couple of times a year.

Now that I’m home, I have two domestic trips coming up in June – a family vacation in Utah followed by a working trip to New York, but otherwise, I’m home for about five weeks. During that time I’ll be working on the book, launching Art and Money (Thursday morning! It will be fun!), and thinking ahead to a few other summer projects.

I hope all is well in your world. See you Wednesday with a special edition preview of the new product.