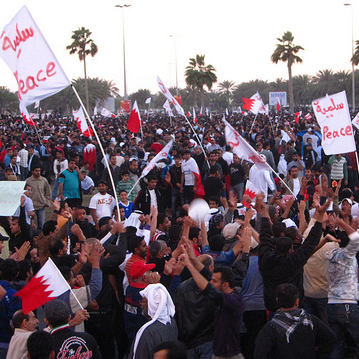 On my first overseas trip in several months, I made it to Libya, Afghanistan, and even (briefly) Kish Island, Iran.

It was a tiring trip, as one might expect, but also a timely one. When I booked my flights, I didn’t exactly plan on revolution breaking out across the region; apparently revolutions are not scheduled in advance.

Let’s start with a story.

During an extended interview with the Iranian immigration authorities (“Please have seat, sir”) I was more nervous than usual in such settings. My two interrogators kept asking the same questions over and over. “Which company you work for?” I tried to tell them about the Travel Hacking Cartel — “Have you guys heard of Frequent Flyer Miles?” — but they just looked blankly at me.

The officials took my fingerprints multiple times. (“Right thumb, mister. Left finger, mister. Right thumb again, mister.”) One of them did lots of database typing while speaking about me in Farsi to the other. Meanwhile, I was sweating it out in my plastic chair. I thought about the American hikers, imprisoned for eighteen months and counting due to allegedly trespassing across the border. (Many reports say they were kidnapped by Iranian guards while still in Iraq.) What if something like that happened to me? I had prepared nothing in the event of such a contingency.

Finally, my Iranian immigration friends determined that a real spy would have a better cover story than I did, so they set me free to explore the island before flying back to Dubai. (“Please do not miss your flight,” they said before I left the airport. “Oh, don’t worry about that,” I said. This was one flight I wasn’t going to miss.)

So while I was momentarily fearful and struggling to explain my occupation without using the word writer, I was also aware of the obvious: if this is what I have to worry about, privileged Western traveler that I am, with my U.S. passport and American Express credit cards, how does it feel to actually live in a place where the state rules by fear? This, sadly, is the reality for most people in Iran, in Libya, and plenty of other countries around the world.

People sometimes make comparisons between the struggle for freedom in places like Egypt or Tunisia with various protests in the democratic world. We certainly have our share of problems where I come from, but these comparisons are quite a stretch. If you don’t like your leaders in the U.S. or any other democracy, well, just give it time and they’ll change. I didn’t like George W. Bush very much, but I had no fear that he would fight to hold onto power and stick around after his time was up. If you don’t like Obama, the same holds true—the clock is always ticking down to a determined end date. You know exactly how many days our leaders have to go, and no one worries about anything different happening at the end.

Besides, presidents in America don’t really affect our individual lives that much. I’m free to do and say what I want most of the time. We can all use the tools of modern technology to communicate with people without censorship. If you want to publicly protest something in America, you can do that too, and the government will even send out police to protect both you and any demonstrators who oppose your views. I don’t think they would send mercenaries with sniper rifles to kill people, which is happening in Libya this week.

In terms of my travel quest, it was good to get these countries off my list—Libya, Afghanistan, and Iran all being more difficult to travel to than Switzerland. I jokingly called it an “Axis of Evil” trip, and I enjoy the disorienting nature of traveling in such places. I could write long posts about getting an Afghan visa, having my flight out of Kabul canceled for three days, sleeping on the floor of Sharjah airport, and so on. Perhaps I’ll do that at some point, but these things seem trivial at the moment.

One of the rules of careful traveling in dictator-controlled states is to avoid discussing politics. But under the surface, you’ll find that people discuss politics all the time—you just have to know how to listen. Until recently, it wasn’t wise to show up in Egypt and ask, for example, “Hey, what do you guys think of the man who has ruled your country for 30 years?”

But if you ask, “So how are things going here?” the response will likely be some form of complaint about the government. You’ll hear about how half the population makes $2 a day despite billions of dollars in grants from the U.S. and Europe. You’ll hear, when you listen carefully, how everyone knows the state is corrupt, but no one feels any power to create change.

Of course, people complain about the government pretty much anywhere in the world, but again, the difference is that in “our” part of the world, the government doesn’t engage in hunting down its own citizens, murdering them in the streets in an attempt to retain absolute power. I think that’s a pretty important difference.

Therefore, if you had asked me six weeks ago whether anything would change in the Middle East and North Africa, I would have said “Not anytime soon. This is just how it goes.” But look and see what’s happening! The whole story is yet to be written, but at least in some places, I was obviously proved wrong by thousands of brave people.

We use the word revolution too flippantly, because real revolutions involve great sacrifice. Those who dare to express themselves are placed at real risk—not only the risk of violence and intimidation, but also the likely possibility of failure. Last year there was a “green” revolution in Iran, where everyone on the outside cheered on the protestors and dutifully changed their Twitter avatars in a show of digital support. Yet the revolution was ultimately unsuccessful, and the same people are still in charge.

The recent cases of political uprising appear to be different, at least in some places like Tunisia and Egypt thus far. I hope there will be others. But just remember, this kind of uprising involves uncertainty for everyone, and clear consequences for some of the brave people who participate.

To anyone around the world involved in creating real change in the face of terrorizing opposition, I’m sure you have better things to do than read my blog. But I’m also fairly sure you have more courage than me. So if you’re out there, I haven’t changed my avatar, but I’m awed at your willingness to risk so much for something your country desperately needs. Peace be upon you.