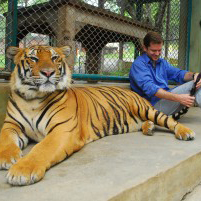 Thanks to some fun travel hacking that led to a better-than-free side trip to Thailand, I took a couple days off at the end of my Belarus-to-Algeria adventure.

I’ve been to Thailand a dozen times, but never to Chiang Mai, the mountainous city in the north, far away from the hustle of Bangkok.

The highlight of the excursion was a day trip to Tiger Kingdom, a cat reserve twenty minutes out of the city where tourists can play a fun game of “pet the tigers while the staff watches warily with sticks.”

I like cats of all sizes, and I had heard good things about the reserve. The tigers are well-cared for, they aren’t drugged, and they aren’t kept on chains. Despite the fact that they are free to wander (somewhat), they don’t attack humans—or so I hoped.

For once I wasn’t jet-lagged, so I set off in a tuk-tuk from my Chiang Mai hotel soon after getting in. Upon arrival at Tiger Kingdom, the first sign wasn’t good—the left eye of the lady selling tickets was completely covered in white medical gauze from some kind of recent injury. One can hope that the injury wasn’t from a tiger, but for the sake of appearances, perhaps they should put her to work in the back office until she recovers.

I then had to decide on my preferred tiger-petting package. Though the website needs some work, the minders of Tiger Kingdom are smart marketers. The Kingdom offers differential pricing to offer a range of experiences. Nice! They’ve obviously been following the daily lessons in the Empire Building Kit. Here’s how the range breaks down:

Well done, guys. I briefly considered taking only the “big tiger room” package, but then I thought about it: I had come all the way to the north of Thailand. The visa for Belarus last week was an incredible $420, and there was no Tiger Kingdom in Minsk. (In addition to passing on the “Striptease Special” in the nightclub, I also passed on what looked like “Vodka Kingdom” in the hotel casino.)

With that in mind, I boldly selected the “Alexander the Great” version of tiger-petting packages. I’d get 15 minutes in each tiger room, plus a CD of photos from the room with the big cats. As they say, you only live once, and hopefully I’d still be alive when it was over.

Before I set off to meet the felines, a staff worker gave me the rundown on what I needed to know. First of all, don’t be an idiot and provoke the tigers. Someone tried that a couple of years ago, and no one talks about it anymore. Second, the tigers are treated firmly but fairly by the staff. Tigers are trained from birth to obey the trainers, and while humans are allowed to lay on top of the tigers (really! see below), tigers and humans are not allowed to play together in any way.

I was then guided in the best way to get to know your typical tiger: approach from the back or side, never toward the head, underbelly, or front paws. I was to press firmly on the tiger’s back—apparently the tiger doesn’t like humans to be too gentle. Since Libby the housecat likes me to throw her around the house more than she likes to sit on my lap, I now see where this preference comes from.

There was virtually no chance of anything going wrong, the staff member told me. But by the way, could I sign this legal form releasing Tiger Kingdom from liability just in case? Nothing major, it just covers mauling, loss of limbs, loss of eyesight (I thought of the ticket-selling lady), and death. Well, what can you do? I signed away my life and went in.

The tigers all have names, about half of which are Thai names that I promptly forgot. The other half were your basic “popular English phrases in Asia” names, like Beautiful Morning and Lucky Day. One of the cats was named Sticky Rice, and that’s where the staff took photos for my 300 baht CD.

After I had pulled his tail and laid on top of him with no objection, I introduced my new friend Sticky Rice to this fantastic new book that launches in only 22 days, and managed to secure an endorsement of two paws up with only minor scratches. As you can see, Mr. Rice was impressed—although after he looked like he might take a bite out of the book, I decided to stop pressing my luck. Shaking his back paw (never the front), I said farewell to my new friend and moved on.

Before I left, I took advantage of my Alexander the Great tiger-petting package and went to the “smallest tiger” room. These tigers are 3-6 months old, and sometimes a bit more active than the big cats, as you can see in this video.

And here’s one more video from the smaller cat room—I have no idea what I wanted to say in this clip, but the next time I get to lay my head on top of a tiger cub, I promise to be more prepared.

For $63, it was a great experience and well worth it. On the way out I met my faithful tuk-tuk driver at the entrance, and he took me back to the city.

For the rest of that day and the next one, I wandered through Chiang Mai itself. I ate good Thai and Indian food. I took a trip to Black Canyon Coffee, a Thai chain I’ve been visiting since coming to Thailand for the first time in 2002. At night I drank Singha beer and took it easy, something I try to do at least every other year, whether I need it or not.

It was a good way to end my country-hopping for 2010. I’m on the way back home now, and will be getting ready to see all of America starting on September 7th in New York City. It will be epic! Or something.

And … that’s it for now. Greetings from LH 402 to Newark, continuing on to Chicago and then homeward bound to the great PDX. See you all on the other side!