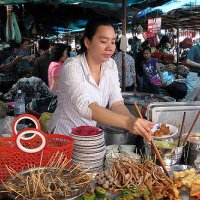 When I wasn’t playing ping-pong and visiting Dunkin’ Donuts, I passed up the chance to visit Cambodia in 2002. After a few weeks in Bangkok, I ended up with a group in a small village a few miles from the Cambodian border. There wasn’t much happening there, and one day someone said, “Hey, why don’t we go to Cambodia?”

We looked into it and learned that the visa would cost $20 upon arrival. The transport to get there and back would have been another $10, and for some reason I decided that $30 was too much to spend for a short visit across the border.

Lesson learned: never pass up a good country when it comes your way. Six and a half years later, I’m spending considerably more than $30 to visit Cambodia. My philosophy is that we can’t change the past, but we are in full control of our present – so after spending a couple of days in Bangkok settling into Southeast Asian life, off I go to Phnom Penh.

The night of my arrival, I’m supposed to connect with my friend Sarya, but everything goes wrong. My random guesthouse has no internet access, and Sarya’s phone number is in my Gmail account. After I trek to an internet café, recover the number, and figure out how to use the pay phone, an old Cambodian guy answers on the other side. Obviously, he’s not Sarya, and naturally, he doesn’t speak English.

I go into another internet café to report to Sarya that her phone number is not working. She has no way to get online and I have no phone, so we’ll have to try again the next day. With no plans all of a sudden, I walk down the main street for 40 minutes, ending up at a combination Khmer + Pizza restaurant for dinner.

Because labor is cheap, restaurants in poor countries like Cambodia are often overstaffed. In Africa we used to go out to the foreigners’ restaurants on embassy row and there would be five different servers waiting on us. One would unfold the napkins, one would take our order, another would bring the drinks, and so on. We had fun trying to figure out the hierarchy to see if napkin-folding was a more senior responsibility than drink-pouring, or vice versa.

Here at the Khmer + Pizza restaurant in Phnom Penh, the same concept applies, except the system breaks down when everyone spends most of the night standing up against the wall. I need some more water, and I look around longingly at all five servers stationed in different areas. Several make eye contact and smile, but no one offers to bring me the water. I finally wave someone over, who takes the request, passes it to someone else, and then a third person brings the water. There’s not much kaizen happening at this restaurant, but the food is good.

One of the more subtle lessons you learn after traveling for a while has to do with the two kinds of hospitality: genuine and false. The genuine is the kind of hospitality you like to receive as a traveler – welcoming, helpful, curious, respectful – and of course I should mention that us travelers need to make sure we are as respectful as possible in return.

The false kind, on the other hand, is when someone helps you out of resentment or an obvious grab for money. I’ve seen this in various parts of the world – the guide in Vietnam who turned hostile on me when I refused to give him $40 for a one-hour tour, various taxi drivers who demand usurious rates, people who approach me on the street and become upset when I refuse to follow them, to name a few examples.

Thankfully, genuine hospitality is the most common kind. I can report far more examples of people going out of their way to help me wherever I go, and I’m happy to say that all of the hospitality I encounter in Cambodia is the genuine kind. While I’m eating my dinner and the restaurant staff are standing around in Phnom Penh tonight, we all watch Animal Planet on satellite TV together. They are fascinated with a documentary on dog-sledding in Alaska. If I was from Cambodia and had never seen snow, I’m pretty sure that I’d be intrigued with dog-sledding too.

The next day I’m still waiting to connect with Sarya. Whenever I call her number, the old guy answers and we have a mixed conversation where I speak English and he speaks Khmer – as you’d expect, it’s a short conversation – so I resume my walking tour of the city. This leads me to the saddest part of this two-week trip, where I spend two and a half hours paying my respects at Tuol Sleng, otherwise known as the genocide museum.

If you are interested in the background and history of Tuol Sleng, this wiki article is a good start. I read the article before taking a motorbike down to the site, but it’s hard to prepare yourself for visiting a place where innocent people were tortured and sent to be executed. The museum is located in the same former high school that was transformed into a detention center during the Khmer Rouge regime of 1975-1979. Roughly 17,000 people were taken to Tuol Sleng during those years, and very few survived.

What can I say about such a place while I’m gratefully chronicling my world travels? Not much, and I am well aware of the inadequacy of a few paragraphs from an outsider. But to avoid mention of it also seems disrespectful of all the people whose lives came to a premature end for no good reason.

Like the Nazis before them, the Khmer Rouge kept careful records of the people they killed. One of the rooms in Tuol Sleng consists of the admittance photographs of hundreds of inmates. All of them wear signs displaying their admission dates, and a large number are from May 1978. I was born a month earlier, and 30 years later here I am looking at the photos of people who were executed after I had just arrived in the world many thousands of miles away. I don’t know what to do with such information, but it seems significant to me in some way.

When I leave two hours later after walking through every room, I am as emotionally disturbed as I expected to be before I came. In a way, I’m glad that I feel so shaken. My theory is, God help me if I am ever not suitably disturbed after viewing such things. A sense of complacency over preventable tragedy is not something I would like to become accustomed to.

At least there is no Starbucks across from the genocide museum (yet). Instead, I go to a small restaurant to read and reflect for the rest of the afternoon.

To clear my head in the evening, I go for another 30-minute run, but running in Phnom Penh proves even more challenging than my attempt a couple of days earlier in Bangkok. Before I leave I check the map and head off towards the river, but I never manage to lose the traffic and it gets worse instead of better. Much of the time is spent dodging motorcycles and tuk-tuks, and I’m glad when it’s over. I return to the guesthouse, take a shower, and head back out for dinner.

I end up at Happy Hour at the Herb Café as President-elect Obama is preparing to be sworn in. I recall the words of Winston Churchill, about how Americans will always do the right thing after they have exhausted all other options. Over the past year I’ve talked with many people in dozens of countries about the U.S. election, and we’ve finally come to the day of the inauguration. The excitement about President Obama is truly genuine and truly worldwide.

At 9:30 p.m. on the eve of my last full day in Phnom Penh, I finally connect with Sarya. I know Sarya from Seattle, and we talk about how much fun it is to run into each other in Cambodia, where she is working with a local NGO for a year.

The next stop is Laos, where I don’t meet with anyone at all. Instead I camp out in the capital city of Vientiane. The conventional travelers’ view on Vientiane is that it isn’t that great, but I like it just fine. In fact, it’s my favorite spot in the sub-region thus far.

I spend most of my time in Laos writing and catching up on my life back at home, but before I leave I’m able to complete my subcontinent running tour with a 6-mile sunset run along the Mekong River. For once, I have a great run with no real traffic problems. The other travelers I run into in Vientiane complain about the pollution, but it’s much better than Bangkok or Phnom Penh. I’m happy, and I add Laos to the list of places I’d like to come back to at some point.

I make my way back to Thailand a couple of days later via tuk-tuk, border shuttle bus, minibus, and finally a $40 Air Asia flight from Udon Thani to Bangkok. I have a day off from travel before moving on, so I go to the movie theatre and watch Defiance . I’m not really a movie person – aside from the ones I see on long-haul flights, I probably watch two movies a year – but going to the theatre in Thailand is quite the experience. You get 30 minutes of previews and commercials, the obligation to stand for a tribute to the king before the featured presentation, and the chance to go for chocolate milk and toast with jam afterwards. Any exploration into modern Thai culture should definitely include a visit to the movie theatre.

The last morning I get up early, return to Suvarnabhumi airport (the taxi driver refrains from making any stops en route this time), and eventually head out on Cathay Pacific to Singapore for the connection to my final destination of this trip: Dhaka, Bangladesh.

Getting to Guinea Bissau

Equatorial Guinea on $508 a Day