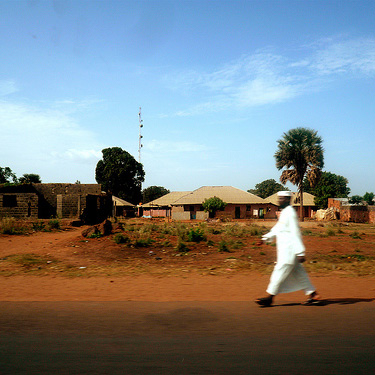 The biggest challenge was the uncertainty. Stepping onto the transfer bus for Heathrow Airport’s Terminal 1, I considered the journey thus far and the upcoming adventure that the next few days would hold.

I was coming off two weeks in India with events and media every day. Then I flew to London after two other quick stops in Singapore and Hong Kong. After making it to London I camped out in Heathrow airport for a few hours—due to flight schedules there wasn’t room for a day off where I could go to the city—and then I flew down to Lisbon and eventually Dakar, Senegal.

In transit terms, this part of the trip was:

The flight to Dakar landed at 1am and I was scheduled to fly on to Bissau at 8am, so I knew there was little sense in getting a hotel. Thus I prepared as best as possible for what I suspected would be a somewhat unpleasant (though necessary) experience. As regular readers know, I’ve had my share of overnight stays in random airports, but sleeping in an airport in West Africa is about as bad as it gets.

In Dakar I had a flashback from years ago—almost a decade, actually. I learned to travel while living on a hospital ship in Africa. Back then I flew through Dakar several times en route to the capital cities of Abidjan, Cotonou, Lome, and Freetown. Each trip was an adventure of its own, and one night I ended up spending several hours in a makeshift transit area (strangely open to the public, unlike most transit areas) and passed away the time as best as I could.

Nine years later, I returned to the same run-down area, where once again I passed the spent the night in grand style by sitting on a worn-down bench. No bed, no shower, no food.

I wasn’t lonely, though. A number of nice gentlemen were very persistent in their desire to help, frequently offering to provide any assistance I might require. As kind as these gentlemen were, I was nervous about falling asleep with my bags next to me. Fortunately, a swarm of mosquitoes who were nearly as persistent as the eager gentlemen prevented me from napping more than a few minutes at a time. After six hours I dragged myself over to the check-in counter for TACV, the official airline of Cape Verde and my carrier of choice (i.e., the only one) to fly to Bissau.

The whole time I was concerned about my visa. Readers may recall what an ordeal it was to receive it last month at the New York U.N. Mission. When I received the visa, it had a month’s validity—which had now expired. After everything I had been through to get it, I worried that it would no longer be accepted for travel.

Fortunately, it turned out I had nothing to fear on this point. The immigration official took a quick glance at the visa (along with the bonus return address stamp on the opposite page!) and stamped it without a single question. I was in! #191!

A Wild Night in London

Making it to Bissau officially wore me out. I can travel 200,000 miles a year or more, but eventually I do get tired.

A couple of days later, I was even more tired leaving. The flight out was scheduled for 1:50am, which meant that check-in was at midnight. The inbound flight was 90 minutes late in arriving, which meant more sitting around a random West African airport terminal.

By this time I had a good streak going with six flights in a row being at least an hour late. I was flying TAP Portugal for five of these flights, and a fellow passenger informed me that TAP is shorthand for “Take another plane.” Alas, there were no other planes to take, so I kept waiting and eventually we made it out.

When the final flight landed back at Heathrow, I straggled into the city and crashed in a tiny hotel room near Piccadilly Circus. I immediately slept four hours, then made myself get up at 7pm so I wouldn’t be awake the entire night before heading back to the U.S.

I had grand plans of visiting a pub, maybe heading to the East End, or seeing a show, but instead I went to the Whole Foods grocery store and had lentil soup in the cafe. At 9pm I returned to my hotel and replied to a few emails while trying to keep my eyes open. I slept again, this time until 4am, and I made myself keep dozing until 5:30.

It was Sunday morning in London, and the tube to Paddington Station didn’t open until 6:30. I figured out how to take the night bus instead, and made my way to Paddington and then Heathrow once again via the Airport Express.

I had a nice moment while walking through Leicester Square that morning. The sun had just come up, with a few late-night partiers and early morning commuters were out and about, and for the most part I had the streets to myself. I made it to the stop just as my bus was pulling away, but I wasn’t worried. The next bus was scheduled to arrive 14 minutes later, and it was nice to just stand there and wait, watching the sun grow brighter and the few taxis that roamed the streets.

On the way back to the U.S. today I did something I rarely do: I napped and watched movies for most of the nine-hour Virgin Atlantic flight.

Yeah, I was officially worn out.

But on the bright side, I’m almost finished with visiting random places like Guinea Bissau. For ten years now I’ve been actively traveling, with the goal of going everywhere firmly in mind since 2006.

If the worst thing that comes of it is premature aging, I figure I can handle it.

On the Road Again: Next Stop, Portuguese Africa