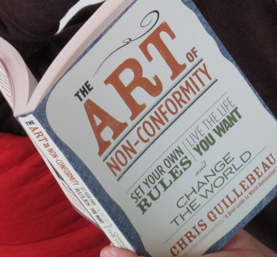 The day before leaving on my final international trip of the year, the FedEx guy showed up at my door.

Unfortunately, he did not have a package with my passport from Washington, D.C., which led to my just-barely-made-it excursion to Algeria. Too bad—but it all worked out in the end, as it usually does.

Instead of a passport, I received a small package from Penguin Books. I get review books all the time, so I assumed that’s what this one was. But then I opened up the package and saw my name. At first I thought it was an impostor, but no impostor would choose the name Guillebeau to write a book. (He would probably choose a name like Godin or Grisham instead.)

And here are two important announcements …

First, the Unconventional Book Tour Is On!

As promised, I’m hitting the road to meet readers in all 50 states (all 10 provinces in Canada will follow in January). We’re confirmed at some good locations—a mixture of big-name bookstores, independent bookstores, universities, bars, pizza places, Pilates studios, and so on. There are also a bunch of places I don’t have a venue for yet, but there’s plenty of time … right?

The goal of the book tour is twofold: first, I want the book to do well, so I’m taking matters into my own hands. Authors should be responsible for the success of their own books, especially these days with the publishing industry changing so much.

But second, even though I believe in personal responsibility, I probably wouldn’t visit everywhere just to promote a book. That’s why the other goal is to live adventurously and tell good stories. The story here is to redefine what book tours look like. Plenty of authors go to major markets, but how many go to every state and every province? Let’s step it up, people.

BUT … the entire AONC network is the result of a Small Army of remarkable people telling their friends. The vast majority of site traffic doesn’t come from famous people; it comes from other bloggers, social networking links, and all of you spreading the word one person at a time.

When I was discussing the book launch strategy with Penguin, I told them that I wanted to involve the Small Army as much as possible. In addition to sending review copies to media folks, I asked, could we send them to a selection of my readers?

Sure, they said—how many copies do you want? Ha ha. Foolish question! I told them that 44,000 would be a good start.

Alas, that request was turned down—apparently they want some readers to actually purchase the book!—but they agreed to give me 99 free copies to send to the Small Army. Penguin is even paying for shipping, and the 99 people will get the book at least a week in advance of official publication of September 7th. It’s not 44,000 free copies, but hey, I do what I can.

I want these books to go to people who care about AONC and want to support the mission. That’s the only real criteria—I don’t care if you have five followers on Twitter or five thousand, or if you even use Twitter. Presumably you know someone who could benefit from our message, and that’s what matters.

If you’re one of the 99, I’ll need some help—you’ll actually be a part of the launch process, and help to get the word out in September … which is only a few short weeks away. I’ll say more about this to the people who get the books, but for now —

If you’d like to be part of this campaign, all you need to do is let me know in the comments. That’s it.

I can’t pick everyone, but Libby the assistant and my usual biased judges will make a list within 36 hours and contact 99 people for their mailing details. Cool?

By the way, I’ll be going full-tilt into “shameless promotion mode” for this book, but the goal is to make it fun. Most of my limited royalties are going to Charity: Water, and I’m actually spending more on the (self-funded) book tour than I was paid to write the book in the first place.

In other words, it’s not a money-making endeavor for me, but I do want to reach a lot of people with the message.

Can you help? Let me know why you want one, and tomorrow we’ll pick 99 people to receive FREE BOOKS.

Update: Thanks for all the interest! Comments are now closed, and the biased judges will get to work on the difficult task of picking 99 people. If you don’t hear from us, you’re still amazing and the book will be available throughout the universe soon.