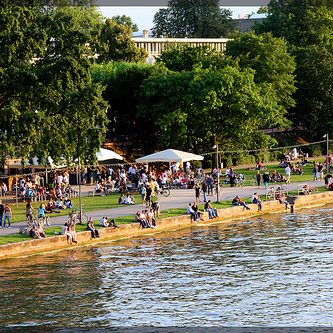 It’s always a sunny day when you arrive in Frankfurt. You might think this is impossible, but Frankfurt is like Seattle: apparently it rains all the time, but never on your first day. (It helps to arrive in the summer months.)

I’ve been here on a dozen stopovers, nearly half of them last year when I was using up half a million U.S. Airways miles for flights on Lufthansa. Each time I’d stay a night, maybe two nights, and learn a little more about the city each time.

Having tried various lodging options during the first few stops—an unimpressive Marriott, a string of indie places, a hostel—I finally settled on the two-star Ibis Centrum, located a short (and always sunny) walk from the main train station, the Hauptbahnhof.

One reaches the Hauptbahnhof by direct connection from the airport, fifteen minutes away. According to some, this train costs €3.90, but in practice it’s more of a suggested donation. In what has become a recurring story in adventures, I couldn’t figure out how to buy a ticket the first time I landed here. I finally just got on the train to the city, hoped for the best, and got off at the main station without encountering any ticket inspections. On the way back I did the same thing, and was hooked on free rides from then on. Once you realize that paying for your train fare is merely a suggestion, there’s no going back.

This time in FRA airport, I notice a sign has been added for my benefit—conveniently in English as well as German— which advises riders that the €3.90 isn’t actually a suggestion; the authorities really would like everyone to please pay it. This time I attempt to be honest and pay up, but once again, can’t figure out the ticket machine. One day I’ll probably receive a bill from the German National Railways for all of these joyrides, but until then, it’s a long walk to the city. I get on the train and successfully disembark on the other side.

After visits #3 and #4, the walk to the Ibis became a ritual. Ten months after my last visit, I pick it up again, crossing the street, avoiding the tram, and wandering over to the riverbank. The green space and winding water are familiar friends; I know them from all the stopovers. Before I get settled, I sit on a bench and look out at the river. The trip this time took me from the West Coast through New York City and, finally, a short connection to Boston … but now I’m here.

Beginning to feel sleepy in the afternoon sun, I check into the room and unpack my running shoes, putting them by the door in hopes of increasing the odds that I will actually use them. Jet lag and general travel fatigue from a lack of sleep the night before tend to keep me dozing in the hotel room, but I know it will be worth it to persevere. I unpack everything else and put it on the bed. Supplies for later: a banana, an apple, and a San Miguel beer—all courtesy of the Lufthansa Arrivals Lounge.

In less than five minutes, I fall fast asleep on the bed.

I sleep for two hours, an acceptable first-day-in-Europe afternoon nap, and force myself to avoid a full sleep cycle. (Once a jet lag nap goes beyond three hours, you’ve lost the battle.) A cup of coffee from the downstairs bar perks me up. Outside, it’s 7pm and still sunny. I head out to the waterfront and hit the road, running a kilometre in one direction before crossing the bridge to the other side for the next forty minutes.

Over on the opposite riverbank, a festival of sorts has brought out the crowds. There are concert stages, beer gardens, sunbathers, and ice cream cones. Bitter lemon with gin or vodka is on special. A bouncy castle offers fifteen minutes of babysitting for €3. I have no money on hand and no kinder who need watching, so I forego the bouncy castle and keep running.

It’s still a glorious day at 7:30pm, with no sunset in sight. I take off my shirt and keep my sunglasses on. As I make my way, the Indigo Girls send messages to me courtesy of my iPod shuffle:

Don’t you write it down
Remember this in your head

Don’t take a picture
Remember this in your heart

Don’t leave a message
Talk to me face to face

After three months of no real travel, I’ve been craving this feeling. Travel is a wonder drug like no other. If you aren’t feeling alive, pack your bags, leave town, and determine what comes next as you move along. Follow the sun where it leads. In my case, the sun often leads to Frankfurt, courtesy of Star Alliance and all those U.S. Airways miles.

As I wind down my waterfront run, a band on the stage is playing a cover of Two Tickets to Paradise. Tomorrow at noon I have just one ticket to the south of France, where I’ll take the train to Monaco, my 155th country. After I return from the quick trip and have another layover in Frankfurt, I have a ticket to Angola (which doesn’t look much like paradise), but no visa despite weeks of effort. This is potentially a big problem … but there’s nothing I can do about it at the moment, so I put it out of my head. I’m happy to run and dream.

An hour after I started, I’m back on the other side and arrive at the hotel. I stretch and return to my room, taking a shower and heading back out in street shoes for dinner. I go to my usual Indian restaurant and remember the other nights I walked the same path. Last year, the Frankfurt layovers came in between various countries in Africa and Central Asia—Kazakhstan, Burkina Faso, Algeria, and somewhere else. Back then my country count was around 130; now it’s 154. So far, so good.

Just as I think differently about New York than I do the rest of the U.S., I don’t think of Frankfurt as Germany per se; in my mind it exists as its own independent place, with its own box of memories. All those free train rides when I couldn’t figure out how to pay. The sex shop that also sells falafel. (Hint: I went for one of those two things, without realizing it was a front for the other.) The Turkish place on the corner that sells beer and universal adapters. (At that shop, I needed both.)

Back at “home,” as I call wherever I stay when I’m on the road, I reply to emails and go to bed at 11pm, waking up wide-eyed at 3:30am but successfully falling back to sleep at 4:30. Three hours later, I get ready for the paradise side trip and the uncertain trip to Angola.

The running shoes are back in the bag, and the journey continues. 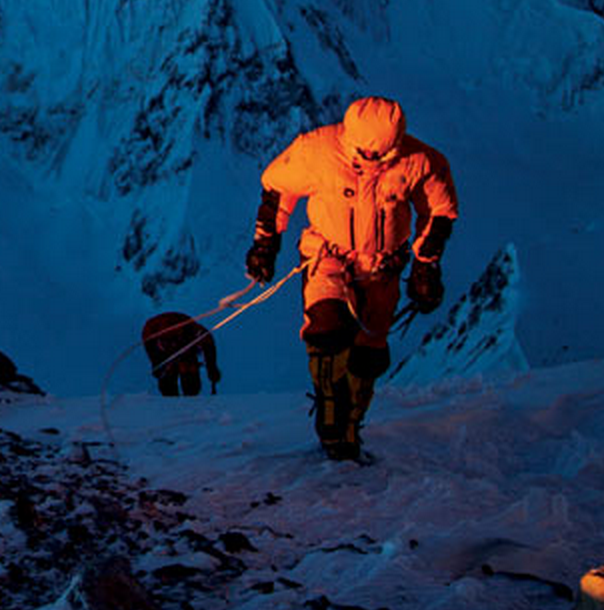 “Adventure Is Anything that Puts Us Outside our Comfort Zone”: Notes from the Himalayas