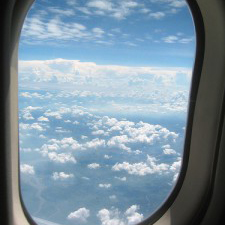 Greetings from the early-early flight (6:05am departure) to DFW, where I’ll transfer to an American Eagle jet up to Des Moines, Iowa.

Over the next 14 days I’ll be in 13 cities, taking the message of AONC on the road through the midwest and the Great Lakes, meeting readers, and trying to keep the plates in the air.

Just a month ago I got on a big airplane and flew to Algeria and Thailand; now I get on puddle-jumpers and hop around the U.S. DFW airport is definitely a different experience than the Thai Airways First Class lounge, where you get made-to-order pad thai and a free massage. In DFW I go to Au Bon Pain for the one vegetarian sandwich in the whole airport. (But on the bright side, they do have Dunkin’ Donuts, something else I can get in Thailand… but not in my home on the west coast.)

A surprising discovery: the United States is a big place! Kansas and Missouri are next door neighbors, but it takes five hours to drive from Lawrence, Kansas to St. Louis, Missouri. I discovered this fun fact precisely last week, when I checked on Google Maps to route out this leg of the trip for the first time. Hmmm. I thought it would be a couple of hours? But no.

Then there are those Great Lakes … for some reason I thought Great meant awesome, as in, “Land of the Awesome Lakes,” but apparently Great means really big. I’ll be driving between Ann Arbor, Chicago, Madison, and Minneapolis next week, which covers much more distance than the short New England drives I did last week. I also hear rumors that it takes seven hours to fly ANC-HNL in non-upgradable Economy Class, but we’ll cross that bridge when it arrives a bit later.

These notes are not complaints; just observations. Most Americans never go to Anchorage or Honolulu in their whole lifetime; for me they are just two stops on the 63-city tour. If driving the midwest is what I have to do to get from bookstore to bookstore and coffee shop to coffee shop, that’s what I’ll do. It’s like taking the Empire Builder train from Chicago to Portland: probably wouldn’t do it every day, but so glad I did it once.

I’m an introvert by nature and often choose to be by myself instead of with groups. But once I realized how much fun it can be to meet with like-minded people and hear about their fun projects, I learned to adjust. Besides, I’m not the only one coming to these places from afar; in some cases, readers are driving two hours or more to come to the meetups.

So that’s why I’ll keep wandering the U.S. and collecting stories for three more months. Bring on those long drives!

I don’t think I’ll send this update out through email, but I’ll post it on the site as I’ve done every scheduled day since February 2008. No comments today either, but they shall return on Monday. Next stop, the American Midwest.

Oh, and by the way – if you do happen to read this, tomorrow I’m opening registration for the World Domination Summit (background here). It’s a big project, but I’m trying to keep this part of it low-key, since the initial, Pioneer registration will only be for 150 people. We need to see who’s actually going to come to this mega-event, and then we’ll reevaluate about how to handle the rest of the demand.

If you’re interested, check back on the site after 9am CST tomorrow. Farewell for now!