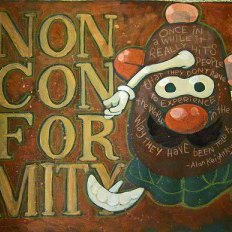 Greetings from Durham, North Carolina, near the Duke campus where we did last night’s Unconventional Book Tour stop.

One week ago, I ran ten miles in non-stop pouring rain. The only thing that made it easier was thinking about everyone else running the Portland Marathon on the other side of town. Ten miles in the rain gave me blisters, but at least it wasn’t 26.2 miles. I escaped to the indoors, went to Chipotle, and now all is well.

If you’re new to AONC, I usually use the weekend space for short updates about my business, UnconventionalGuides.com. Since I’m on the road meeting readers in all 50 states this fall, I’ve been writing about that instead.

After driving through the midwest and Great Lakes last week, I finally made it to Minneapolis, where we had the almost-perfect gig thanks to a great location, a great host, and even a fun folk duo that came out to play. The only thing that made it 9.9 stars out of 10 was when someone bumped into me and I spilled red wine all over my nice blue shirt.

Note to self: drink white wine before speaking next time. Thankfully I had a t-shirt under the dress shirt, so I was able to give my talk and do what I call “Questions and Attempted Answers” from the microphone without looking any more silly than usual.

My two stops in the Dakotas were both hosted at Zandbroz, a bookstore with locations in each city. After driving through the Midwest and Great Lakes (a loooong drive, starting in Iowa and ending in Minneapolis, the long way around) I returned the rental car and took a quick commuter flight to Fargo. From there I rented another car and drove to Sioux Falls where I met with another small but fun group of unconventional people.

Ending in Sioux Falls brought the second major leg of the tour to a close, completing 23 out of 63 stops. There’s still a long way to go, but it’s going well and has definitely been worth it.

After a few days at home in Portland (where I ran the 10 miles in the rain), I flew to Maryland, where I was a guest at a media class at the University of Baltimore on Tuesday night. Wednesday night was at Barnes & Noble in Washington D.C. Thursday was in Alexandria, Virginia at Motley Fool HQ. After the Beltway stops, I headed out to Charleston, West Virginia, and Durham, North Carolina.

I’ll write more about those cities in the next update, and all details for the next 36 stops are listed here.

Due to popular request, I’ve added an additional stop in Franklin, Tennessee (near Nashville) this Wednesday night (the 20th, at 7pm). This event will be hosted by Dan Miller of 48 Days fame in his barn. It’s short notice, but if you know someone in Nashville, tell them to come! RSVP here to get on the list.

The WDS continues to fill up with attendees, although thankfully it’s slowed down a little since I don’t actually want it to sell out right away. If you haven’t signed up to join us next June in Portland, you can do so here.

I also still run my business, UnconventionalGuides.com, from wherever I am. I don’t have time for any active business development these days, but thankfully the project is fairly self-sustaining and continues to attract new customers even without active promotion.

This week I wrote to the Frequent Flyer Master owners’ list about the U.S. Airways Grand Slam promo. Long story short, this promo is an easy way to earn at least 20,000 Star Alliance miles, and if you can put more time into it, you can earn 50,000 or more. Even with limited time during the week for travel hacking, I’ve already got my new bonus up to 30,000 free miles, so I hope many of our community will do the same.

Thanks for reading, thanks for caring, and tell your Tennessee friends about the bonus stop in Nashville on Wednesday night at 7pm. I’ll see you again from the road this week.