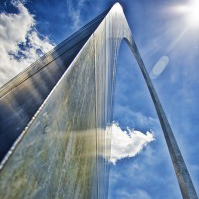 I stepped outside my hotel room and put my headphones in. Taking the elevator down to the lobby, I looked out at blue sky and sunshine—much nicer than the previous day of cold rain.

Then on the way outside, I did something that brought on instant embarrassment, pain, and déjà vu: I walked directly into a glass door that I didn’t know existed. I thought the door was open, but sadly, it was not.

Since I was walking quickly through the lobby and even getting ready to run as soon as I was outside, the collision was sudden, shocking, and loud. The receptionist, the doorman (who was obviously slacking off on the job), the other guests, and even the piano player turned around to look. Of course, I ignored them as best as I could, finally managing to push open the door that had previously been closed and stumble outside. The world was spinning and when I put my hand to my forehead, it came away streaked with blood. Nice one, Chris.

The déjà vu came from three years ago in Singapore, when I pretty much did exactly the same thing. That time I was carrying a takeaway cup of café au lait, which spilled on the floor during my collision. I’m not sure which was worse—spilling the coffee in a crowded Singapore Starbucks, or crashing my head into a door in St. Louis on the way out for a run.

Quickly deciding that having a concussion on the sidewalk was preferable to being further embarrassed inside, I kept walking down the street. Gradually, my head cleared and I calmed down. I didn’t have a concussion, I wasn’t bleeding that much, and the best thing I could do was try to forget about it and have a good run.

Which is exactly what I did. The hotel was on the waterfront, right by the MLK bridge and the famous Gateway Arch. I only had about 25 minutes to run (time is short on the book tour these days), but it was a great 25 minutes after I got over the door collision. I ran by the waterfront and listened to Marching Bands of Manhattan by Death Cab for Cutie. Then I listened to Paula Cole and Dave Matthews. When time is short, no need to be experimental—stick with what you like.

People often ask about keeping up with running while I’m on the road. These days the goal is just to maintain a base: if I can run at least 3-5 miles, three times a week, I’m not really in marathon mode by a long shot, but I least my body remembers how to run. The main marathon taking place these days is 63 meetups in 63 cities, often back-to-back on a one-per-day schedule.

On the way back to the hotel I ran under the arch twice, circling back around after the first time to get another look. The sun was out in full force. I was sweating, which is much better than bleeding, and excited about the day. I snuck back in the hotel and kept my head down all the way to the elevator. After getting a shower and packing up, I went back down to check out. Thankfully, the clerk either didn’t recognize me as the guy who had just ran into the glass door, or was nice enough not to say anything.

These things happen; we have to shake them off and keep going. When you run into a glass door, keep running. In Chicago a few days later I showed up at the restaurant where we were having the event and the hostess said, “Oh, are you here for dinner?” I said, “No, I’m here for the 75 people who are coming out in about twenty minutes.” Both of us then realized that something had gone wrong and the restaurant hadn’t planned for our arrival. It was a little awkward at first, but we sorted it out and in the end everything was great.

Remember: always ask, “What’s the worst thing that can happen?” Most of the time, the answer isn’t that terrible, or even that likely.

Back in St. Louis

I walked to the parking garage and retrieved my rental car. Onwards to the next stop! This is life in motion. And speaking of life in motion, an hour later I received a speeding ticket in Illinois from a state trooper who was obviously not familiar with AONC. I gave him an invitation to the World Domination Summit, but he still gave me a bill for $140. Alas.

These days I know a lot of people, a lot of people know me, but it’s an interesting dynamic. I think it was Maggie Mason who coined the phrase “famous among dozens,” which is a good way to explain it. I go to book signings and everyone comes out to say hi. Sometimes people introduce themselves at coffee shops or on airplanes. But it’s a very small circle, and no one in the non-blogging world knows who I am, which is probably for the better.

The way you deal with fear and uncertainty is to put things out in the open and do them regardless of anything else that comes your way. Do one thing a day that scares you. Get excited and change things.

This is your reminder today. 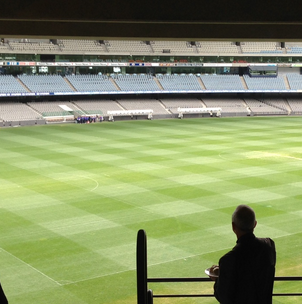 Leadership Lessons with a View