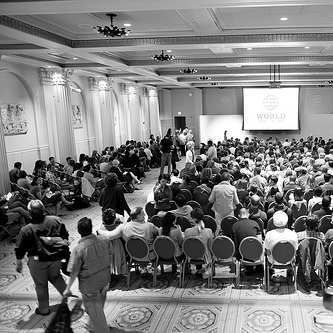 When the big day finally arrived, more than 40 people worked closely together to provide a gathering space for the 500 awesome people who came to town, more than half of whom were visiting Portland for their first time. Everyone involved was a volunteer—no speakers were paid, and attendees themselves contributed much of the weekend as we went along.

It’s going to take me more time than expected to process last weekend’s epic adventure, but I’ll share a few specific stories and video clips over the next few weeks. In the meantime, you can read attendee wrap-ups here, here, here, here, here, and here (this is a small selection that can lead to many others if you’re interested).

Here are a few highlights from the main event…

Pamela Slim performed an unexpected martial arts demonstration during her opening keynote talk. I said in my intro that “Pam could kick my ass”… not knowing she was actually going to prove that as part of a demonstration for all of us! Nice work, Pam.

I asked Pam to open and Jonathan Fields to close for a reason—I trusted them, and I knew the audience would be in good hands. Jonathan gave a preview of his latest and greatest work, all focused on turning fear and doubt into fuel for brilliance.

Also speaking from the main stage, Leo Babauta skillfully executed a moonwalk and set of pushups for us—nice job. When he wasn’t exercising in public, he shared how he transformed his life through a series of small steps that created significant results.

While Danielle LaPorte was speaking to a standing-room only crowd, I was handed a note that said a fire alarm had been triggered outside and there was a slight chance they would need to evacuate the entire building. Yikes! For 10 minutes I wondered how that would work, before being handed another note saying all was well. (I thought the firestarting thing was just branding… but obviously not. Use your powers only for good, Danielle.)

Late on the first day, Jodi Ettenberg talked about how she went to law school because someone bet her she couldn’t get in, and then moved to New York on a similar bet. Later that night I got a note on Twitter: “Chris, will you bet Jodi she won’t go out with me tomorrow night?” I said I’d stay out of that one.

John T. Unger played the harmonica and talked about his disaster-and-recovery story. Preceding him, Andrea Scher and Jen Lemen earned a standing ovation after hand-writing a personal message to all 500 of our attendees and taping it on the bottom of their chairs. For a great conclusion on Saturday night (and before hundreds of people went out on various city tours) Karen Walrond talked about the beauty of different, probably a better showcase of non-conformity than I provided in my own book.

We brought in “DJ Prashant and the Bollywood Dreamers” to lead the group in a Bollywood dance lesson. For the rest of the weekend, everyone was walking around performing their best Indian dance moves. (By the way, you should definitely NOT watch this video of two professional bloggers attempting to follow along. When you don’t watch it, you’ll notice that J.D. Roth was cleverly avoiding his own dance attempt… no fair.)

The keynote talks were complimented by dozens of workshops, breakout sessions, parties, meetups, tours, and numerous informal activities throughout the weekend. We ended on Sunday night with a massive afterparty on the other side of town, where shuttle buses ferried our group back and forth until 10:30pm. (And apparently the parties continued after that, but by then I was in bed…)

Yes, we’ll do it again next year, and yes, we’ll need a bigger venue. The team is taking some much-needed down time to work on other projects during the summer, but we’ll regroup and begin planning WDS 2.0 this fall. For our inaugural event we experienced extremely high demand (every ticket sold out five months in advance), and as the word gets out, we expect even more interest next year.

I offered the inaugural attendees a special advance registration for next year, and nearly 70% of them signed up—not a bad conversion rate. More than a year in advance, we already have 285 people confirmed to return, without having a real registration process or even the exact date. So far, so good. The early-early notification list for everyone else is over here, but please note that I don’t expect to offer tickets until at least September.

In their own words, here’s how one of our attendees explained his return to life at home after the weekend:

“Even though I had to take power naps at two rest stops around 1AM to keep from falling asleep at the wheel on the way back to Seattle, it was worth it.

The five-minute walk from my car into work on the day after the summit felt longer and harder than the four hour, mini nap infused drive coming back to Seattle from Portland in the dead of night. Leaving a place and event filled with people that aren’t content with being normal or simply fitting in, brought a tinge of culture shock upon me.

The walk to my cubicle brought me back to normal, but because of WDS, I had a renewed vigor to be different and make my dreams become a reality.”

We had a media team on site, and they’re creating an entire documentary about WDS. For now, you can see initial photos here. Video, speaker interviews, and attendee contributions are in the works and expected to be completed in about 4-6 weeks.

A few months ago I realized I had underestimated some of the costs of putting on such a production. Registration fees were approximately $125,000, and the expenses at last count—before I started paying invoices without looking at the numbers on them—were approximately $145,000. (Free business tip: ideally, these numbers should be reversed.)

Well, no need to feel sorry for me—I can’t begin to tell you how happy I am to have made this investment. It feels a lot like a non-sensible, self-funded, 63-city Unconventional Book Tour that was also awesome and completely worth it in every way.

I said at the beginning of our time together on Saturday that WDS was not a “motivational conference”—a phrase that a media article had used in describing our adventure. I’ve never been to such a thing and have no idea what happens there, but my impression is that you go to a “motivational conference” if your life sucks and you need someone to inspire you. Instead, this was a gathering of awesome people working on remarkable things, all learning from one another.

As someone put it on Twitter, it was “a heart attack of awesome.” Another person called it “the grown-up version of summer camp, ” and someone else said “WDS was like walking into a room with 500 of your new best friends.”

Here in Portland, we’re deep in thought and introspection over where to take this next year and beyond. But rest assured—the best is yet to come.

Thanks to everyone who made WDS an epic adventure. We’re looking forward to doing this again!

The “Hell Yeah” Roundup: Your Turn
© 2022 The Art of Non-Conformity | Site by Bytegrow Technologies