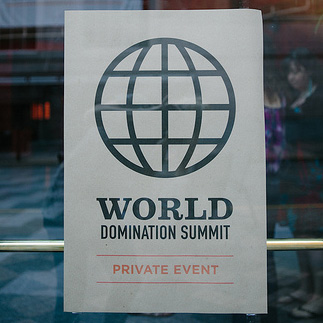 This post includes a video from last weekend’s World Domination Summit, and a brief explanation on why our team invested $100 in each WDS attendee.

A number of people have asked me to share more about the surprise we unveiled at the end of WDS 2012. As mentioned on Thursday, you can read the experiences of many other people who were at WDS all over the internet. (This list will be updated soon, since there are now more than 150 posts.)

With all of the stories going around, I thought it would be good to show everyone else how this surprise sendoff took place, and also explain a bit about why we did it.

You can see the entire sendoff in this new 13-minute video we’re releasing today. This video was never intended to be public—it was just something I shared with the group who came to Portland. If you weren’t there, hopefully the context and tone comes through somewhat adequately.

The best way to understand why we made the mass investment is to watch the actual video. I know, it’s 13-minutes long and you have to listen to me talk, but we did put everything in there for a reason.

As I explained in the video, all kinds of people come to WDS, and many of them do all kinds of inspiring things. During a forum we produced on the final day, we heard from Nate who walked across America, Stephanie who supported a different charity every day for a year, Michelle who fought breast cancer with a creative spirit, and several other shining examples of what WDS is about.

Great as they were, these examples represented less than a dozen of the 1,000 people we had in attendance, most of whom could have also shared their own unconventional story if we had enough time.

Last year our all-volunteer team produced the first WDS at a financial loss of about $30,000. When I wrote about it at the time, a number of people didn’t understand, but I meant what I said: I was thrilled to do it and we knew we were building something that was bigger than all of us.

As a result of last year’s successful event, we received a lot of attention and had much higher demand for the sequel. More than 5,000 people were on the waiting list for WDS 2012, and we sold out of all available tickets six months in advance. Our contacts with the city of Portland who helped to arrange the venue kept saying to us, “Wow, you guys have great attendance!”

And we kept saying to them: “Oh, it could have been much, much more.”

Another high point: several of our team members overheard the venue staff talking about the whole group. One of them said, “These people who are taking over the world are very nice! I’m surprised.”

After last year I was contacted by a number of companies who wanted to sponsor WDS, as well as an organization who wanted to purchase the entire brand for a large sum of money.

Our team talked it over and considered different alternatives, but we came to the decision that WDS would remain completely non-commercial and sponsor-free. I don’t think all companies are evil, but I just couldn’t picture filling our event space with logos and constantly making announcements to thank different corporations.

We try to be consistent and coherent in our branding. Our gift bags contained useful and high-quality items, not promotional junk from various other brands. Our stage design featured a full-size wooden globe and lighting that adjusted based on what each speaker was talking about.

At some point in the process of brainstorming WDS 2012 we had a fun idea: why not invest “our” money back in our attendees, all of whom have great ideas of their own?

Also, I was curious… what would happen if you gave away $100 with a charge to do something interesting?

We used the profits from the event and a donation from an anonymous donor (it wasn’t me) who attended WDS 2011 and wanted to make a significant contribution.

We also tried to prepare everyone throughout the weekend by saying that the sendoff would include a surprise that they had to be present to receive. (If you weren’t there, you didn’t get an envelope later.)

In taking this action, we’re essentially placing a bet. We’re betting that our smart community can figure out a good use for their funds. I’m glad to see that people are responding well to the call-to-action. There are now more than 150 blog posts with various stories and personal experiences.

In the “no good deed goes unpunished” department, I have also seen some skepticism of the act of trusting people with so much money, as well as comments from people who don’t believe that we actually distributed the money in cash. Oh yes we did! Ask anyone who was there.

We’re betting that the skeptics are wrong, and that WDS folks will put their funds to good use. Already we’re seeing fun ideas take root: several people are “regifting” their $100 and asking their own network of friends to do the same. On Saturday morning more than half the audience pledged to give their birthday to Charity: Water, and several have added the $100 toward their campaigns.

Among other stories, Rami in Canada has promised to pay me back $1,000 if he doesn’t complete his book manuscript before next year’s WDS (I told him I’ll accept the bet, but I hope he wins).

What will be the long-term effects of this act? We’re not sure. It was a grand-scale public experiment, built on the belief that good people can do something good with an unexpected investment.

The guiding principles of WDS are community, adventure, and service. Underlying all of these things, I hope, is a sense of gratitude. We have good lives! We can do big things!

Pursue your own goals and make the world a better place. That’s what AONC has always been about, and that’s certainly an underlying message of the World Domination Summit.

Big thanks to all who made this happen: our 10-person Action Team that meets throughout the year, the 60 volunteer Ambassadors who joined us to produce the weekend gathering, our speakers who volunteer their time, and all of our great attendees who traveled from more than 20 countries to be with us and each other last weekend.

The best is yet to come.

If you were at WDS 2012, what will you be doing with your investment?

If you didn’t make it this time … want to come next year?

What Happened at the World Domination Summit