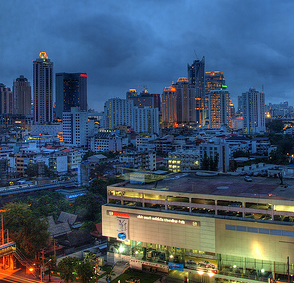 One hour from landing in Narita Airport outside of Tokyo, the pre-arrival video comes on. “Soon we will be arriving in the United States of America. If you are a U.S. or Canadian citizen, please follow the signs for U.S. If you are a foreign visitor…”

The Japanese man sitting next to me looks back and forth between the video and me. Finally, he takes off his headphones and asks, “Wrong movie?”

The wrong movie plays for nearly three minutes before it is turned off by a flight attendant. She comes on the p.a. after another three minutes. “Ladies and gentlemen… sorry… we can’t find the arrival video for Japan. If you have any questions about Japan, let us know.”

Other than that, the 11-hour flight across the Pacific is uneventful. I arrive in Narita and quickly transfer to a Cathay Pacific flight for Hong Kong. Another five hours goes by as I fitfully sleep in the back of the plane.

In Hong Kong, it’s nearly 11pm local time, and early in the morning in Seattle. My final flight leaves at 10am the next morning, so I attempt to sleep a few more hours on the floor near gate 30. In the morning I post an update on the Frequent Flyer Challenge and have breakfast in the Cathay Pacific lounge. Then I get on CX flight 525 and head out to Bangkok, Thailand for the first real stopover of the trip.

How Not to Teach English

Other than transiting on Star Alliance flights a couple of times, the last time I was in Bangkok was a month-long stay in the summer of 2002. My memories of the time consist of play-teaching English for two hours a day and spending the afternoons at the local Dunkin’ Donuts.

I call it play-teaching because that’s what it was: no book, no method, no evaluation — just a room of six university students who showed up expecting an English lesson from me every evening. At the Dunkin’ Donuts in the afternoon I frantically devised ways to make the time pass for the upcoming two-hour teaching session.

What I remember most was playing ping-pong for at least half an hour every night. The students became completely fluent in ping-pong terminology, and if I hadn’t prepared anything else for the class, I’d pick up an extra box of donuts so we could have a “conversation break” after an extended ping-pong match.

Then I would talk with Jolie, who was also teaching and taking the responsibility much more seriously. Jolie, a real teacher by training, spent hours preparing lesson plans, creating pop quizzes, and meeting her students for one-on-one sessions. During this time I would be drinking coffee somewhere, or riding the bus to a good coffee shop since there was no metro at the time and going anywhere in Bangkok took forever.

Six years later, there are a few updates to Bangkok life as it pertains to me:

All told, my time in Bangkok this week is significantly cushier than last time.

On Saturday I head for Chatuchak Market, supposedly the world’s largest flea market. By this point in my travels I’ve been to several “world’s largest markets” – funny enough, all in different parts of the world – but it’s true that if you like shopping, Chatuchak offers a wide selection of new and secondhand goods. Among (many) other things, the flea market has a huge collection of used t-shirts that seem to arrive mostly from the U.S.

My favorites from this trip include:

“I Had My Birthday at Burger King”

My problem in places like this is that I am a terrible shopper. In the “world’s largest” flea market, I buy a bottle of water and some cashews. I almost buy a pair of shoes, since that’s what I had actually came looking for, but the attempts at bartering on the ones I finally selected are unsuccessful.

No problem. I walk away and eat some more cashews. Then I set out to do more walking, which I what I like to do anyway.

An unexpected benefit of getting to know so many cool people over the past year is that I now have friends I can hang out with almost anywhere in the world. In Bangkok I meet up with Cody and Brooke, who take me to a great wine bar. Both of them moved to Thailand about six weeks ago and are learning to adjust to the joys and challenges of the remote lifestyle. Lots of people talk about being able to work from anywhere; Cody and Brooke are trying to actually do it while bringing together other interested people.

I’ve been doing a lot of walking during my four days in Bangkok – probably at least four hours a day. Normally when I walk that much I don’t worry about running or much else in the way of exercise, but after talking to another friend back home who told me stories of running in Bangkok, I’m inspired to head outside for at least a few miles.

What can you say about running in downtown Bangkok? Not much, really. It helps if you think about it as a video game. Along the way you need to watch out for obstacles (cars, motorbikes, pedestrians), avoid enemies (taxi drivers who are convinced you really want to hire them instead of run), cope with hazards (stop lights on 120-second timers), and try to find a closed-off parking lot where you can run back and forth until the security guards become impatient.

In other words, it’s in your best interest to wear bright clothing and bring along a good attitude. I survive for 30 minutes, which I decide is a good enough victory considering the circumstances. To reinforce the limited victory, I also do 100 pushups after coming back in.

On my way out to Suvarnabhumi airport a couple of days later, my taxi driver slows down and pulls over to the side of the road. He’s apologizing with a big smile, but I don’t know what the problem is. Flat tire? Engine trouble?

After the car stops, he gets out of the car in a hurry, still smiling and apologizing. We’re parked on the freeway with four lanes of traffic going in full force in either direction, and my driver proceeds to urinate on the side of the road while hundreds of cars speed past.

Don’t get me wrong; I’ve seen my share of guys pissing on the side of the road, and normally this is not a noteworthy observation. Until today, however, I don’t think I’ve ever seen this happen on the freeway. I am suitably impressed, or something. Looking relieved, the driver gets back in and we continue our journey to the airport. I try to avoid shaking his hand while paying him the $7 as I get out of the car.

I’m headed out for Phnom Penh, Cambodia, my first of three new countries on the trip. This flight finds me traveling on Air Asia, a budget airline based out of Malaysia. Budget airlines offer cheap fares but no lounge access, so I sit outside the E gates and write these notes.

Goodbye, Bangkok. See you next weekend….