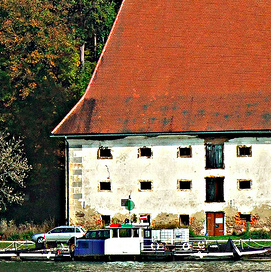 I. Dairy Queen in Udon Thani

I sit across from the Dairy Queen—hugely popular in this part of Asia—and reflect on my day. Getting here required a bit of soft adventure. In this case I paid $3 for a 30-minute tuk tuk ride from Vientiane, Laos to the Thai–Laos border, then $6 from the border to Udon Thani airport, another 30 kilometers away.

The trip can actually be done for less money by taking a direct bus from Vientiane, but the bus I needed was full when I got there. I tried to get on anyway (sometimes this works) but my efforts were unsuccessful. No matter. It worked out just fine, and here I sit. Contented.

On another trip I’m coming home from Europe through Vienna, a city I’ve wholeheartedly loved since my first visit years ago. This time I’m in transit for a couple of days, staying in a hostel and sleeping late before changing eight time zones. In the evenings I run for an hour along the river Danube.

On the way back from the run I go for takeout pizza and bring it to the hostel. On the last morning I go to the bakery, where I utilize my ten words of German to order milchkaffe and apfelstrudel. Then I take the train back to VIE airport and look around in wonder.

Vienna to me is the classic representation of what many of us in North America think about when we idealize old Europe. It’s trendy to look further out for travel inspiration, but I like Vienna just fine. After 18 months traveling on mostly OneWorld tickets, I’ll be buying a Star Alliance Round-the-World ticket later this year to get to some destinations that are better served from those carriers. If I can make the routing work, I’ll definitely plan the European portion through VIE instead of FRA.

III. The monk in Business Class, Singapore to Dhaka

A Buddhist monk is sitting in the row ahead of me in the Singapore Airlines Raffles (Business Class) cabin. I wonder how that works—do monks get upgraded from elite status? Do monasteries train in travel hacking?

Flights to places like Bangladesh have an odd mix of characters. Among the expats, there is usually a group of U.N. workers, a few businessmen, an occasional journalist, and often a couple of people who you can’t really figure out what they’re up to.

I guess I fit into that category to any other observer, so I can’t complain. Me and the monk, we have something in common. I look around and think about the fun life I have, flying to Bangladesh and feeling like it’s the most natural thing in the world.

IV. The other monk in Moldova

The Buddhist monk on Singapore Airplanes reminds me of the orthodox Christian monk I share a compartment with on the train from Moldova to Romania on yet another trip. It’s July and therefore the hottest time of the year to take an overnight train through the region. From the moment I get on board I start sweating. It doesn’t help that it takes a while to leave and we keep slowing down along the way, preventing the wind from coming through the windows and cooling us off.

Most of the other passengers are male, so I don’t think much about taking off most of my clothes and sitting on the bunk in my boxers and iPod earbuds. Right at that moment a female border guard walks through the compartments checking passports. Oops. I’m proud to represent my country well, I think as I hand her my passport. I put on a shirt and she flicks through all the pages with suspicion.

Later I talk with the monk for a long time, who has also stripped down to survive the heat. He tells me about monastery life and I show him photos of the years I spent in Africa. Finally we get underway to Bucharest. Even monks need to sleep, I think as my friend dozes off in the bunk below mine.

I didn’t like the heat at the beginning of this nine-hour journey, but now that the breeze is flowing, all is well. I doze off myself, while watching Romania roll by outside the window. At the end of the trip the monk gives me a prayer rope, which I keep with me for the rest of the journey.

V. The snow-filled streets of Toronto

Several Decembers ago, I ended up in downtown Toronto for a friend’s wedding. At the time I had been in Africa the previous two winters, so I hadn’t seen snow in a while. That weekend, a huge snowstorm (well, by my standards) set into Toronto and the streets were stacked a foot deep with snow.

I don’t usually like cold weather, which is why I usually like the great city of Toronto much more in the summer. This time, though, I’m happy to walk through the snow in boots and a winter coat I had brought up specifically for the trip.

I walk through the Distillery District and St. Lawrence Market, listening to music and thinking about where I’ve been and where I’m going. Whenever I think of snow in the future, I’ll think of this visit to Toronto. Good times.

I know that contentment is more of an internal state of being rather than something that is derived through external circumstances. Yet, I am human and therefore influenced by my surroundings.

Could I have this feeling anywhere? Yes. But I also don’t mind going to Thailand or Toronto to find it.

Part of why I travel is for moments like these. Very few involve museums, guided tours, or typical itineraries. Most of them are hard to predict; I just look up from whatever I’m doing and suddenly realize I’m perfectly content. Nothing needs to be added or taken away.

Where do you find contentment?

Loneliness
© 2022 The Art of Non-Conformity | Site by Bytegrow Technologies