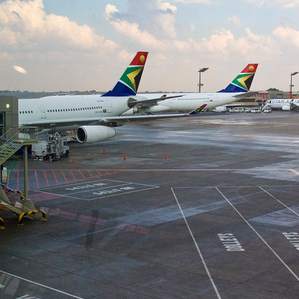 Yesterday I walked off the jetway into the transit area of Johannesburg’s international airport and had a flashback. I’d been here so many times… yet I always remember coming here years ago, way back in 2006 for the first time.

Back then I was beginning a new way of life. I had ended my four-year stint on a hospital ship in West Africa. I was going to a new home in Seattle—eventually. But first I had a side trip: I had to pick up a new country!

The country collecting quest was only beginning, and hadn’t even been announced to friends or family. That would come a few months later, on the first big trip to Asia. That day I was booked on South African Airways out of Accra, flying through the night to Jo’burg and then connecting the next morning to Maseru.

Maseru, right. Where was that, exactly?

Maseru was—and presumably still is—the capital of Lesotho, a tiny country completely surrounded by South Africa. I’d read about it in the guidebook, at least the brief chapter allotted to it in the midst of much more about South Africa itself. I didn’t know what to expect. And that was the thing! It was all about traveling without expectations.

On that visit I arrived bleary-eyed and headed through the transit area, just as I did today. I remember looking at the departure boards for the flights to other countries in southern Africa:

I’ve been to those places now—all of them. I worked and traveled and chipped away at the map, and with every return trip to Jo’burg, I’d have more and more connections to those foreign-sounding places.

Back then, though, it was all strange and unusual, and I was so excited.

I remember thinking: This is it. This is what matters. This is where I find my joy.

That day, and on many subsequent visits, I listened to music on my headphones, lost in daydreams, before finally sauntering down to the gates where passengers were bused to smaller planes heading to destinations throughout southern Africa.

It wasn’t that Maseru was amazing, because it wasn’t. As I recall, the high point was talking to a taxi driver about his experience driving the Secret Service around in advance of a visit by Bill Clinton. Nice people, the driver said, but they wouldn’t pay in cash, which was a hassle.

No, the trip was fairly basic, as trips go. It’s that I was on my own and seeing the world. That’s what made all the difference. That’s what gave me the hunger to continue.

Just Another Night in Abu Dhabi