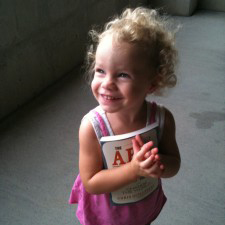 Greetings from Minneapolis, Minnesota—stop #21 on the 63-city Unconventional Book Tour. I’ve been on the road all week and getting ready for the latest event here in a few hours.

Driving in from St. Louis, I discovered two interesting things about Kentucky: first, Louisville is a long way from Missouri. Second, the state of Kentucky operates in multiple time zones. This meant that instead of being 20 minutes early, I was 40 minutes late. Oops.

I was stressed about having people waiting for me, but they were very kind and we had a good talk at Highland Coffee after I finally made it in. Thanks, guys!

After hanging out at the Louisville coffee shop, I drove most of the way to Bloomington before crashing in a Motel 6 (I have no elite status there, which is probably for the better) about 30 miles out. The next day I came all the way in and met up with Bloomington co-host Adam Baker, also known as the great ManVsDebt. The photo in this post is of Adam’s daughter Millie, who joined us along with Courtney for most of the evening.

We decided to award Bloomington the prize of “most random bookstore” thus far on the tour, for reasons I’ll have to explain at another time. But the good news is that a nice group of readers came out, including someone who drove five hours to get there. Several people brought cupcakes and Adam had brought several bottles of wine, which we shared with the group. All in all, it was a great stop with great people.

That same night I decided to drive on to Cincinnati instead of going there the next morning. Adam joined me for the drive and I wrote emails from the passenger seat for most of the way. The next day he had to do a radio interview, so I did the driving while he talked to the show.

Adam and I stayed with Matt Gartland (great guy) who also arranged the venue for our Cincinnati meetup with Jane Friedman, another friend. The four of us were joined by Todd Henry, producer of the Accidental Creative podcast and upcoming book, and then with a nice group of about 30 readers.

After Cincinnati, Adam decided to come along to a couple of other stops as well, so we drove up to Ann Arbor together. I was also joined by my brother Ken, whom I hadn’t seen in a long time. Adam and Ken together were a great help—we said that Adam handled the P.R. stuff and Ken was security. The crew got even bigger with Karol Gadja, who pitched in with an introduction at the Ann Arbor event, and Johnny B. Truant, who drove a couple of hours to come up and hang out.

The Borders where we did the Ann Arbor event (flagship store #1) was very welcoming. The event planning staff had written me in advance to find out what kind of pens I wanted to sign books with. At first I thought that was an unusual question, but later realized it was representative of the kind of attention to detail they showed. At the end of the night I signed a large banner that was then posted in the stairwell, and I even got to select a “Guest Pick” author book that would be displayed for other readers downstairs.

After the talk and book signing, a few of us went out for drinks at a nearby bar, a venue that wasn’t hard to find since we were directly on the U. of Michigan campus. Ken and I then went back to the hotel for the night, and headed on to Chicago the next morning.

In Chicago, Ken and I showed up at the restaurant where we were all supposed to meet. The hostess came out and I said, “Hi, I’m Chris and I’m here for the book tour event tonight.” She said, “What event?”

Hmmm. Apparently there was some confusion, and the venue we had confirmed two months in advance was no longer confirmed. Thankfully, everything worked out in the end as it usually does. We did the meetup outside on the patio, and although it was a little challenging with 75+ people and no microphone, we made it work.

My thanks to Alexandra Levit for co-hosting, to Adam who had taken the bus over from Ann Arbor to help out yet again, and to the Rockit Grill guys for being flexible.

After staying the night in Chicago, Ken and I got back on the road to drive up to Wisconsin. This meetup was scheduled for 2pm and billed as a “Wisconsin Cocktail Party” hosted by Ryan Paugh of Brazen Careerist (and other) fame, along with Caitlin McCabe. Five minutes before 2pm, no one was there. Then I walked outside and saw a big group lined up by the door—apparently the door was just locked, and a few dozen people had come out from around town and beyond.

I really liked Madison and had coffee with Ryan and Caitlin after the meetup. Ken had to fly out of Milwaukee, and Adam had returned to Indianapolis. Saying farewell to both of them, along with Ryan and Caitlin, I got back on the road by myself for the final long drive of the week: Madison to Minneapolis. Five hours later, I made it to MSP airport where I dropped off the rental car I had picked up way back in Des Moines, Iowa. I took the light-rail into town and set up shop at the Hilton Garden Inn, where I’m posting this update.

Over the past week and a half I’ve done 11 meetups in 11 days. At most of them I either stay for a couple of hours late to sign books and talk with people, or we all go out for drinks somewhere. Despite the busy schedule, it’s been rewarding and I’ll have more to say about the whole process at some point. For now I’m just plugging away on the road and trying to stay as caught up on my other work as possible.

This week I’ll be in Fargo and Sioux Falls before heading home for a few days. Next week, I’ll be on the East Coast again, hanging out in Baltimore, Washington, and Alexandria before heading south for the next part.

Wherever you are in the world, here’s wishing you a great week. Thanks for your support of the book, and thanks for being awesome.