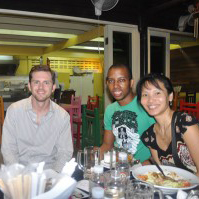 Greetings from home base in the great Portland, Oregon. I’ve just returned from my first trip to Asia of 2010.

The February trip was quite intense. First, I went to two faraway island groups: Papua New Guinea and the Maldives.

I’m glad I made it, because they are both fairly time-consuming to get to. However, it’s also true that flying to islands can sometimes present challenges. Flight schedules are limited. For PNG I flew six hours from Manila to get there and six hours to Singapore to leave.

I’m not complaining, of course—just observing that I was pretty tired towards the end of the trip. I had a great time seeing friends and recovering in Bangkok before going home again.

LIFE – I wrote about the legacy of Malcolm X, Dropping Keys, Happy Birthday to AONC.

WORK – I wrote about Overnight Success (Year Three), The Buzzing Inbox, and The Writer’s Guide to Money and Passion.

TRAVEL – I wrote about Advanced Travel Planning and Tips for Stress-Free Travel.

SITE AND STORE UPDATES – I wrote the World Domination Postcard Project, an Update from Manila about Everything, Case Studies for EBK, Good Work vs. Great Work.

I made it to two new countries — Papua New Guinea and the Maldives. Then I went to Bangkok and finally came home through Singapore, Seoul, and Los Angeles.

You can see photos and videos of my trips here. Drop in to take a look if you’re so inclined, and add me as a contact if you’d like.

Pam Slim and I are wrapping up the first 28-day group of the $100 Business Forum. It’s been so much fun. I’ve probably learned as much from the participants as I shared with them.

After the April group (completely sold out, sorry) we’re planning on doing the next two groups in May and July. You can join a waiting list here, but because the demand is so high, please only join if you’re really serious about doing it.

Otherwise, I’m gearing up for the launch of the Empire Building Kit. Yes! This will be fun.

I came home from my trip and was deluged by a flood of postcards at the mailbox place. So many arrived in the first week that the box was full and they had to keep the rest behind the counter. Then there was an awkward moment when I had to explain what “World Domination HQ” was all about (that’s not my legal business name, unfortunately), but it worked out OK.

You guys are so great. The first batch is now viewable here on Flickr, and I’ll begin posting one of the best ones each week on AONC—keep them coming.

My big thanks to everyone who came out to the Bangkok meetup! You can see a video of the group here and a fun batch of photos here.

Dwight runs a charity and helped me coordinate the meetup.

I first met Sean Ogle ten months ago in Portland. At the time he was wearing a tie (on the hipster east side of Portland, dressing up is very odd). Now he lives in Bangkok, wears t-shirts every day, and helps out with an online business. He’s also my affiliate manager and he’s also in the upcoming AONC book.

Zoe Westhof, co-author of the Art and Money guide, came down from Chiang Mai.

Then, long-time friend Stephanie came over from Cambodia and did a photo shoot with me at the Ancient City of Thailand, half an hour or so out of Bangkok. You can see her fun photos here.

I’m so grateful to be surrounded by fun people all over the world.

From the 12th-16th I’ll be in Austin, Texas with the rest of the online world. Naturally I’m throwing a party on Sunday night, March 14th. Details forthcoming, but RSVP here to get on the list.

Then I’ll go on another big trip, the dates and countries of which are not yet set — but I know I’ll have a couple stops each in Central America and Europe.

As promised last fall, I’m slowly-and-carefully ramping up my business during the first half of the year. This is because the second half of the year will be spent launching the AONC book and traveling throughout North America to meet readers.

With that in mind, while I’ve been traveling I’m been working on the initial launch of my first high-level business project, also known as the Empire Building Kit, and the goal is to help people build a sustainable lifestyle business ($50k-150k / year) by doing one thing a day for a year.

The plan is to get this going on Tuesday, March 16th, live from Austin. It will be very big and very fun. Well, correction – it will be very fun, but before rolling it out to the entire universe, I’m going to start with a small group of AONC readers. In next week’s update, I’ll explain more about how it will work.