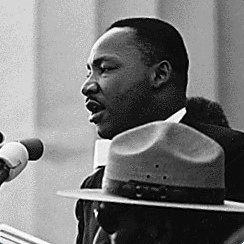 Martin Luther King, Jr. famously said this in response to questions about civil rights and the law. The point was that morality and the law are not always on the same side.

I often think about this as I ponder the social and political issues of our time. The question that comes to mind is:

Politicians of all stripes claim Martin Luther King as a hero now, but during his lifetime it was much different. The FBI maintained a file on him and worried about him being a friend of communists. Despite tapping his phone line and keeping tabs on his travels, they were unable to prevent his murder.

Because the benefit of history makes everything clear, the challenge is to get it right the first time.

Where did I stand on the Iraq war? I opposed it, but not very forcefully. To be honest, it seemed to make sense at the time with the information we were given. I should have been more openly skeptical. Whether or not my stance could have changed anything is somewhat irrelevant.

Where do I stand on equality and the right to marry whomever you want? I support it, obviously. My choice in marriage doesn’t affect anyone else, so why should I be threatened by anyone else’s choice? The people who oppose gay marriage are usually the same ones who support limited government—which of course is ironic.

Where do I stand on healthcare reform? Judging from my email, I know that many international readers don’t understand what a big deal this is in the U.S. Our country is the only rich democracy in the world that doesn’t have some form of universal coverage. I read the papers wherever I go, and everyone wants to know, what’s the problem?

The problem is that most of the people who are upset about healthcare reform already have good coverage. If they get sick, they can go to the doctor. They are also good at defining the debate to make people think that money will be taken from the rich and given to the poor.

Personally I think poor people deserve healthcare too, but the fact is that the poor are not the only ones who lack good healthcare in America. I’m not poor, but because I’m self-employed, my options are limited and I’d love to have more of them.

If anything, I’m worried that whatever plan comes out in the end will be so watered-down that it won’t produce the real change we need. If Obama can actually achieve real reform of the U.S. healthcare system, he deserves a lot more than a trophy in Norway.

These aren’t all of the important issues of our day, of course, and I don’t think I’ll change anyone’s mind about them by writing on a blog. Other than getting people to think for themselves, I’m not really interested in persuasion.

It just makes me think, where is my responsibility?

What would I have done in Nazi Germany or in the early days of the Civil Rights Movement? I’d like to think I would have been on the right side of history, but there’s no way to know for sure.

If there was one thing that MLK taught us, it’s that change doesn’t usually happen by itself. It’s better to speak up than to be silent; better to be wrong than indecisive.

Fast forward a few decades, and now it’s time to make new choices. Have you made yours?

Update: Thanks for all the feedback. Since we already have a broad range of comments below (positive, negative, and variations), I’m going to close the section so we can move on to other things.

By Any Means Necessary

“It’s Only Life or Death”: Disaster and Opportunity Interview with John Unger

The Reviews Are In! Attendee Blog Posts and Memories from WDS 2016 (Round 1)

The Reviews Are In! Attendee Blog Posts and Memories from WDS 2016 (Round 2)
© 2022 The Art of Non-Conformity | Site by Bytegrow Technologies