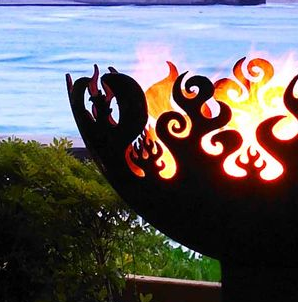 This is the story of John T. Unger, a working artist who actually makes a good living. Despite the recession, each month in 2009 he’s made more money than in the same month last year, in addition to more than he did in every corporate job held long ago.

But that’s not the most interesting thing about John.

What’s interesting is what happened before his art business started taking off. The way John puts it, the best thing that ever happened to him was nearly being killed in a diner by a crazed taxi driver who held a gun to his head. (It taught him perspective, he says.)

The second best thing was suddenly losing his entire freelance workload in 2000. (He decided to stop freelancing and go all-in with his “real” art.)

The third best thing was having the roof of his studio cave in while he was standing on top of it, which nearly brought him to bankruptcy but ended up as the catalyst for the full-time art career he has now.

To learn more, go and read this article on John’s site—it’s excellent and deserves wider attention. (If you have to choose between the rest of this post and the article, read the article.)

I caught up with John last week to talk about recovering from disaster (and a few other things). The Q&A is below:

In a word: “practice.” I’ve started over with nothing more than once. In fact, one of my favorite lines about how I started my art career is “I did it with nothing, because nothing is free.” The world is full of stuff that no one wants or that no one sees. Learning to use those to build something is the same kind of thinking that goes into turning a disaster into an opportunity.

Part of my resilience is that I know from experience that just because it seems like the apocalypse, it doesn’t mean tomorrow isn’t coming. I figure that the world ends every second, and it starts over the very next second. I’ve seen the end of the world so many times I’m just not impressed by it anymore.

It takes some faith, courage or self-confidence to walk through a fire, sure. But you decide to keep going, and then you figure out how. My experience as an artist is really helpful for me in this because in some ways I view my job as “building a world.” Not the whole thing, but the parts that are important to me. I work mostly from found objects, and so my creative life isn’t just about inventing, it’s about re-inventing. I take what I find and I build.

You don’t notice opportunities if you limit what you’re looking for to a specific goal. It’s vital to maintain some fluidity, so that you can act on unexpected opportunities. Because I’m in the habit of always looking for new ideas, possibilities or opportunities it comes naturally to do so in times of distress.

Yes and no. If your current plan or strategy or practice really isn’t working then it may be time to redirect your energy and focus. I don’t think you should ever give up on your core values or dreams, but sometimes it turns out that there’s a better way to implement them.

For instance, my first career was as a writer and poet. Despite some fairly high profile gigs, I was unable to support myself financially with words at the time. But those skills have made my current career as a visual artist possible— the fifteen years I spent pursuing poetry had a direct effect on how I deal with subject matter, meaning and metaphor as a visual artist. They bring a greater depth to my sculpture which makes it meaningful to people.

Also, my ability to write about my art helped enormously in building a successful career. Almost all of my sales, including galleries, come through my blog. I’ve shipped my work to all but a few states and at least seven countries. That reach would have been impossible for me before the internet, and if I had been limited to the local economy I would probably not have been able to make a full time living in the arts.

The irony in a way is that I’ve had my work included in ten books now as an artist, and am starting to see opportunities for finally publishing books of my own. So now it finally comes full circle.

In the article, I wrote, “The only way you can tell the difference between disaster and opportunity is to decide to make an opportunity out of every event.” That’s both easier and harder than it sounds. It’s easy to decide to make a change when your back is against the wall, but unless you follow through with acting on the decision, it won’t save you. Taking action is the hard part, especially if you lack resources after a fall.

When things fall apart, it usually requires an extremely creative approach to build the world again. There are techniques I’ve developed that make that easier for me.

The first thing I do is assess the situation unemotionally and try to see it for exactly what it really is. With any problem solving situation in my creative work, it’s important to look at what things do rather than what things are supposed to do. The same is true for problem solving in life events. You have to know what you’re working with in order to successfully influence it. Or subvert it.

The next step is to see if there is some way to leverage the force of the disaster itself to provide a solution. I regard this as a form of Tai Chi. I’ve never formally studied Tai Chi, but the core concept of redirecting an external force rather than meeting it with an attack has worked for me in all kinds of contexts. Any real disaster has some momentum, and if you can find a way to leverage that force, or turn it to your benefit, you may be able to accomplish a solution more quickly or easily. When my studio caved in, I was able to use the situation to find a solution that just wouldn’t have happened otherwise, and both the bank and I came out ahead the long run.

Finally, as an artist, I believe that almost nothing is impossible but many things are less than obvious. Ultimately, the solution to many problems is to approach from the side, or behind, or upside down or backwards. Part of what makes me good at this kind of problem solving is that I practice all day long by reversing and inverting ideas to see what else they hold when held up to a mirror.

I’ve built enough of a reputation for my work and ideas that I find I can easily reach out to other artists, thinkers and people who interest me. Having the respect of my peers is probably the most rewarding aspect of what I do. I’ve gotten a lot of nice media attention, had my work profiled or featured in books, radio, TV, magazines, etc.

Sales of my work have increased every year, and I now have a comfortable and reliable income. In fact, I’ve done better every month of 2009 than the same month in 2008, so even during the rough economy I’ve done better than I would have in a more traditional job.

I continue to try new projects, some of which succeed and some of which don’t but it keeps the work interesting and it’s nice to be able to make new work without having to worry about money like I used to.

I’ve been able to provide a lot of work for other people, both my own employees and other business who supply me and I feel really good about that. I like the fact that my business generates opportunities and income for other people as well.

To me, John’s story represents the triumph of the human spirit and the creativity of the desperate. As John points out, it’s not just about optimism, at least not in a passive sense. Mere optimism doesn’t pay the rent. When you come to the point of desperation, you do more than just hope for something.

As John puts it:

“The only way you can tell the difference between disaster and opportunity is to decide to make an opportunity out of every event.”

Disasters suck. No one thinks the recession is good. But sometimes the best things arrive in disaster form, and it’s up to you to decide how to respond.

Big congratulations to John for making it out of three big disasters—not that he needs validation from me or anyone else. And good luck to all of you with your next disaster.