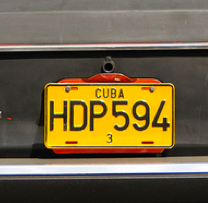 As part of the Annual Review series, I look back at everywhere I went in 2011.

As usual, it’s a long list! Despite a lull when I spent several months at home writing a book and preparing for WDS, I still made it to a decent amount of places.

All told, I made it to at least thirty countries, including twenty that were new to me. Highlights included a visit to a gorilla reserve in the Eastern Congo and running a half-marathon in Cuba, my final country in the Americas. I also traveled to every province in Canada for the conclusion of my first book tour, and lots of U.S. cities for various meetings, talks, transit stops, and adventures.

In rough chronological order, here’s everywhere I went in 2011:

Note: this is the list of new countries. I also visited approximately 15 countries I’d been to before, on every continent except South America and Antarctica.

The reason I go on many of these crazy trips is because of the quest to visit every country in the world. I began this journey about five years ago, and I’ve been dutifully traveling the world ever since.

Much to my surprise, I’m not falling behind on the goal—I’ve had plenty of hardships along the way, but I’m now well on track to finish in April 2013. In fact, I’ll end December with only 16 countries to go. Woop woop!

Yeah, I’m psyched… but I’m also a little afraid and uncertain of the future. Traveling the world has been a big part of my identity for a long time, and while I expect to keep wandering after 2013, there’s no doubt that some things will be different. I’m still processing what these means, and I’m sure I’ll be doing so for some time.

I’d usually say something like “next year will be even more intense,” but this time it may be different, since I’m down to less than 20 countries to go. I’ll still be traveling a lot over the next year, but the itineraries will become more specific. I’ll be visiting Sudan, Guinea Bissau, Turkmenistan, and several other countries that can be challenging to get to. I’ll also be preparing for the big finale in 2013. Everything is on track! And I’m still having fun.

Feel free to share your own travel list, high point, or misadventure of 2011. And by the way, don’t worry if you haven’t been to many countries this year… remember, I’ve been doing this a while.

I’m grateful I can do this and looking forward to another great year of travel in 2012.

New to AONC? Check out The Art of Non-Conformity book, now on sale at Amazon for just $10.19.

Advanced Travel Planning: February – May 2010
© 2023 The Art of Non-Conformity | Site by Bytegrow Technologies