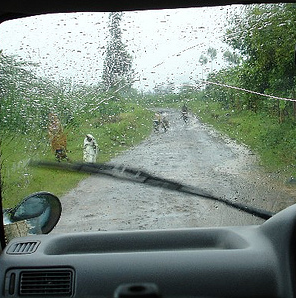 Note: This post contains videos. If you can’t see them, you can view the collection over here.

After flying through the day and night via Hong Kong, Johannesburg, and Nairobi (yes, I’m perpetually tired), I made it to Kigali, Rwanda—the starting point for my latest trip.

This was a special adventure: a visit to several countries in Central-East Africa, and my first time to trek into the forest of Virunga National Park in Eastern Congo.

Even after I made it to the region, getting into Congo required two overland border crossings. I left with Ahmed, my driver, from Kigali in the early afternoon for the drive to Kisoro, Uganda. It was about 150 kilometers away, but with rain, construction, traffic jams, and a couple of stops, it took nearly four hours.

We eventually rolled up to border crossing #1, where I said a temporary farewell to Rwanda and entered Uganda. To get into Uganda, I had to pay $50 in cash—fortunately, Rwanda offers free entry for U.S. citizens, so I didn’t have to pay anything when arriving in Kigali the previous day.

There was a one-hour time change in Uganda, so between that and the long afternoon drive, the sun was setting as we arrived at the small town of Kisoro. My tour had advertised “budget accommodation” that night, and that’s certainly what I received. It was cold and my room had no heat, so I shivered through the night and got up at 5am for a “budget breakfast”—Nescafe and white bread with no jam in sight—before we hit the road.

Once we got going, I was in better spirits. We drove to the second border crossing, the one between Uganda and the Democratic Republic of the Congo. (There are two “Congos” – the other one is the Republic of Congo. I didn’t go there on this trip, as it’s more than 1,600 kilometers away.)

The difference between Uganda and Congo was striking. My guide pointed out exactly where the border began and ended: on the Uganda side, the road was tarmac. On the Congo side, it was dirt. The change was evident in the interaction with people too. While people were friendly on both sides, Congo definitely had more of an edge. (Lesson: if you’re going to be stuck on one side or the other, try to be stuck on the Uganda side.)

Finally, we jumped into another vehicle—this one a step-down from our earlier Land Cruiser—and rode about ten kilometers to the edge of the forest. The road was much bumpier and my guide called it a “free African massage.”

And on and on it went

Arriving at the park, I met John, my third guide of the day. John is a park ranger who has been leading tours for fifteen years. John and I were joined by another guy with a gun, who made me a little nervous when he tripped and fell in front of me… with the gun strapped around his back. Hmmmm. Thankfully he wasn’t hurt, and thankfully he didn’t shoot me.

This guy also stopped on our way into the forest for a drink of refreshing water… or something. Take a look at this video and I think you’ll understand why I was so surprised:

Glad I brought my own water

On and on we hiked, through forest that grew progressively more dense. My trail-worthy outfit of running shoes and a pajama top from Cathay Pacific was covered in dirt and leaves after the first hour. I finished my water and carried the plastic bottle the rest of the way, not wanting to leave it behind.

We came to several clearings where we saw evidence of recent gorilla visits—gorilla nests, gorilla latrines, branches that had been broken by gorillas—but no actual gorillas. By this point, an animated conversation had broken out between my guides. I didn’t understand the words, but I got the basic meaning: “Where are they?”

Studying the area further, it appeared to the guides that a rogue buffalo had come along and scared the gorillas away. Gorillas (at least the ones in this park) aren’t afraid of humans, because the rangers have carefully built trust with them over time, followed them on Twitter, etc. But an over-eager buffalo will cause even a 200-pound gorilla to hightail it to higher ground.

After more than two hours hiking without spotting anything but vines that scratched me and large bugs that provided an energetic jungle welcome, I’ll admit: I was ready to pack it in. Sorry, but I’m a soft traveler—two hours in the jungle was a lot for me, and I knew we had two hours going back the other way. I was disappointed about not seeing the gorillas, of course, but I had made it to the Congo and gave it a fair attempt.

The guide who spoke English convinced me to give it one more hour, and shortly afterward we came upon three other park rangers. A gorilla conference then ensued:

Which way did they go?

This time there was hope—we knew the general area of the gorillas; we just had to get there.

Our caravan set off again, with the mzungu in the middle. If you are a foreigner, especially a white one, you will quickly learn this word whenever you encounter children in East Africa. It is the catch-all word for “outsider,” and as with most words that describe people by race or background, it can be used in a negative context, but can also just be a neutral word. (Conversational English lessons of the region seemingly include “Give me a pen, mzungu” as one of the first phrases to be acquired. “What do you have for me, mzungu?” is learned in level two.)

As we hiked, there was talk of my position in the caravan, and much shifting around to ensure there was always someone behind me. “Don’t let the mzungu get lost,” John told the others. Since I had no idea where we were, I appreciated the command.

We kept trekking and John instructed me to put on a mask to guard against gorilla disease. I took this as a sign that we were getting close. All of a sudden, we saw them: the first gorillas!

Here’s what I had trekked through the jungle for. I dutifully waved and gave them the universal thumbs-up sign, thanking them for deciding to show up at last. But these gorillas were just a preview of the main attraction—John and the guy with the gun led the way a bit further in.

(A note on the gun: according to the rangers, they have never killed a gorilla. The gun is for the use of a warning shot, to guard against poachers, and only as a last resort in the event of an attack. I don’t like guns and wasn’t happy when the guy carrying it tripped in front of me, but otherwise I was happy to have him along.)

While I was approaching what soon became known as Gorilla Family HQ, John suddenly whispered and told me to be very still. The gorilla motherlode moment was foreshadowed by an “Did that just happen?!” moment when a female gorilla with her baby suddenly went sauntering past. See for yourself:

When I recovered from the shock, I managed to take another clip of her having an afternoon snack from the Starbucks of the jungle:

Walking forward even more, we came to the motherlode: an entire family of gorillas, including a male silverback that weighed approximately ten thousand pounds. I called them the Congolese 7, and I was reminded of all the hours I had spent playing Donkey Kong back in the day.

In years past, I could match anyone in the ability to jump over barrels in an Quixotic quest to save the princess, but coming face to face with a real one made it clear: I would NOT want to mess with this gorilla.

We stayed in the area for about half an hour, and I shot some more clips as the Congolese 7 alternated between rest, bug-cleaning, snacking, and tree-climbing. In this clip, two gorillas fought it out for dominance of a small treetop. It’s pretty obvious which one won:

Not enough room for the two of us

By now the afternoon sun was in full force, so we said goodbye to my new friends and began the long hike back. My guides decided to take a shortcut, which worked out about as well as it usually does when I’m running. I’m not saying we got lost, but it certainly took a hell of a long time to get out, and some suspicious backtracking caused me to wonder. My favorite video of the return journey is here—you get the idea:

Camera angle shakiness in honor of the Jason Bourne movies

Weeks later, or perhaps an hour and a half later, we made it back to the edge of the forest. Normally, the battered vehicle will drive up to the edge to pick up tired muzungus, but this was the rainy season and the roads were bad. We walked another mile or two downhill, I declined a dozen requests for free pens, and forty minutes later, I was reunited with my original guide.

Hopping back in the gorillamobile (woop woop), I said farewell to John the ranger and a bunch of kids:

Catch y’all on the flip side

And then I left. Except, of course, leaving a national park in Eastern Congo takes a while. We drove back on the terrible roads to the Congo border. A crowd of people gathered around the vehicle, offering to change money, find me a bus, like me on Facebook, and so on. I got my Congo exit stamp and walked across the border to the much better road on the other side. There I paid another $50 to return to Uganda (unfortunately you have to pay every time you leave and re-enter) and we drove back to Kisoro.

Later we drove to the Rwandan border, where I got yet another exit stamp from Uganda, another entry stamp from Rwanda, and finally headed back to Kigali. On the three-hour drive, I listened to music and thought about the latest adventure.

I had made it to Congo, a relatively hard country to get to, and number #160 for me. The next day I’d fly to Burundi, stop #161 of the ten-year world circuit.

All was on track, and all was well. I had paid a lot to visit the gorillas, in both money and fatigue, but as usual—I was glad I did it.