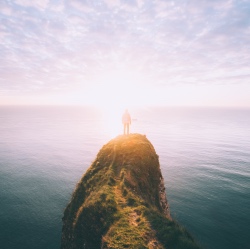 I mentioned that I felt some resistance to this year’s review, so I ended up doing it differently. Not surprisingly, some things will be different about my recap process as well.

The biggest difference is that I’m pretty much entirely focused on the future at this point. I call it the review, but it’s much more of a forward-looking, goal-setting practice. I typically spend one day looking back and the rest planning ahead.

This time I didn’t even look back at all. It wasn’t until I started writing this post that I realized I had spent the entire time only looking forward and working on my new project (more on that in a bit).

It’s not like I had a terrible year. The past couple of years in general have been hard, but this year ended a lot better than it began. I also had a number of major highlights.

No, it was just for some reason I skipped right past the reflection stage. I’m moving into a new phase of focused work, and that’s taking much more of my time and attention than everything else.

Here are a few things that stand out about 2016.

In Vancouver, B.C. for the Born For This Tour

I published the Born for This book and went on a 30-city tour.

This was my fourth book and the most personal one I’ve written. Immediately upon publication in April, I began a North American tour to meet readers in 30 cities.

I felt better about this tour than any I’ve ever done. The logistics were smooth, my talk was strong, and we had good turnout almost everywhere. I thought I’d be exhausted by the end, but the honest truth is that when I finished, I wanted to go back out and do 30 more cities. I think that’s a win!

On the other hand, the book itself didn’t sell as well as I hoped. It did well (nearly 20,000 copies in month one, Wall Street Journal bestseller, etc.) but everything in publishing is relative and I would have liked it to have been more. This is my only complaint and probably the major reason why I didn’t put together another big leg of the tour. I can give a good talk (once in a while) and everything else can fall into order, but I need a strong foundation to build on. Maybe next time.

Travel continued to support my life instead of the other way around.

When I was pursuing my quest to go everywhere, travel was a major priority. I scheduled everything else around my obsessive need to get to places like South Sudan, Tajikistan, and East Timor. I worked from wherever I was, but there’s no doubt that it took a lot of time and attention.

Now, as I discovered last year, I still love to travel, but I do so in a different way. I enjoy flying long-haul to Hong Kong or Dubai (did it 3 or 4 times last year) but I also enjoy domestic trips for events or random trips for no particular reason.

In the travel hacking department, I re-qualified for my most important elite status levels with American Airlines (Executive Platinum), Alaska Airlines (MVP Gold 75k), Hyatt (25 stays), and Starwood Ambassador (100 nights!). I took two writing trips to Jakarta, which for some reason has turned into a regular, week-long stopover point for me. I am slowly learning to understand Tokyo, a city that has always perplexed and intimidated me.

This doens’t completely fit on a “looking back” list because it’s something that didn’t happen, but I wanted to mention it. In the past couple of years I’ve focused less on entrepreneurial projects and more on books, blogging, and events. I like those things, but I also like entrepreneurial ventures, and I’ve been feeling neglectful of that area of my life.

Anyway, I intended to do more in this department… but it didn’t happen. Le sigh. Better luck next year!

I never would have guessed that an event I started 6 years ago would still be running strong, and that it would be one of the best things I’ve ever been part of.

Each year in the ramp up to the event, it ends up consuming my life and sometimes I wonder, “Is this worth it?” And then everyone comes to town and we do amazingly fun things and I’m exhausted and I think… “Yep. Worth it.”

I would love for you to come next year.

I started writing a new book that I’m VERY EXCITED ABOUT.

Don’t get me wrong, I’m always excited about writing books. I feel grateful that I can publish work that goes out around the world and makes an impact on people.

But even though I like writing books, I don’t always feel confident about the ones I write. I think this is partly a neurotic writer thing—I’m proud of Born for This, for example, and I believe in the message. I know it’s helped people. But I also feel somewhat insecure about it, in the sense that I like what it is but I kind of intended for it to be something else.

The point is that even though I’m a neurotic writer, I feel both excited and confident about the next book. In terms of subject, style, and timeliness, this next book (coming fall 2017) is my favorite in a long time. More to come on that, of course—and I hope you’ll be part of the planning process. I need help!

I started going to therapy and taking medication for depression + anxiety.

What can I say about therapy? If you’re able to go, you should. I started earlier this year and I continue to be amazed at what I take away from the sessions. I usually walk away feeling sad and reflective, but glad I went.

In the early part of the year I also started taking an anti-depressant medication, which I’ve continued and plan to continue for at least another six months. I just realized I didn’t write about this before, probably because I wasn’t in a good place to start writing about it, so maybe at some point I’ll tell you the whole story.

I don’t think it’s been a magic solution by any means, but at the time I felt I was in need of some sort of baseline. So I got a prescription for a daily medication (Wellbutrin) and also one for Xanax, which I take situationally.

Until a couple years ago I never took any prescription medication. When I started taking Adderall, my life and work saw a major, immediate improvement (my last book never would have been written without it), so I figured since that was a success, I should be more open-minded to something similar for depression and anxiety. The effect is far less noticeable with those medications, and I’m careful to take only small amounts of the Xanax, but I do think they help a little.

There’s more I could say about each of these things, and many other things I could say. But since I’m 95% focused on looking forward, especially this year, I’m going to stick with that.

In an upcoming post I’ll tell you about my plans for 2017. Nothing is changing except everything, and for that I’m excited too. Stay tuned. 🙂

Yours in the future,