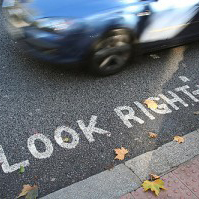 After looking back on the year that’s nearly finished, I spend most of my Annual Review time thinking ahead to the forthcoming year.

While I wrapped up the 2010 review and looked ahead to 2011, here are a few of the summary notes I wrote to myself:

As a big 2010 came to its conclusion I felt purposeful and satisfied, but also on the verge of overwhelm. 2011 and 2012 will be even bigger – how can I maintain momentum without forgetting to live in the moment? This is the challenge and the opportunity of the year: to create sustainable growth in all areas while retaining a core sense of identity.

For the main part of the review, I divide my life into a number of categories and then set goals for each. Many of the categories are the same each year, but a couple of them vary. For example, in 2011 I have goals for the World Domination Summit, an event that hasn’t existed until now. A few of my main categories include:

Some goals may be broken into sub-categories; for example, “Financial” has sub-categories for Income, Savings, and Giving because these are related but distinctly separate activities. In the main categories that relate to this blog, here are a few things planned for 2011.

As discussed here and here, I try to write articles that remain relevant and helpful for a long period of time, as opposed to writing about issues of the day that will lose their relevance over time. Of course, I’m also writing about my trips and business work, which does change as time goes by, but I try to keep those things as the minority. I greatly enjoy writing for the blog and don’t see it as a means to an end. If I could only choose one writing project for the rest of my life, I’d chose the blog.

Thankfully, I don’t have to choose—and even before I finished writing my first book, I knew I wanted to do it again. I’m proud of the AONC book and glad that so many people are enjoying it, but it was also a learning process to write in much longer form. The first one was a presentation of my general worldview, and future books need to get more specific on a given topic.

My next book will focus on the stories of unconventional entrepreneurs, especially people who started a business without a lot of money and often after walking away from a traditional job. I’ll make the formal announcement about this book (and how you can help) in early 2011. Since everything in the publishing industry takes forever, I’ll write the book during the first half of next year, and it will be published a year later in Spring 2012.

Every week I complete various guest pieces for other blogs and publications. I haven’t set this as a major goal for 2011 because I want to keep my writing focus on AONC posts and the second book, but I’ll continue to do guest features whenever they are a good fit.

I’d also like to complete an extended work (likely a PDF manifesto) all about the Unconventional Book Tour. So many people have asked questions about the publishing process, and until this year it was a mystery as well. This project may be a stretch, because I’m occupied elsewhere… but it’s on my “optional and amazing” list in hopes that I can pull it out.

My biggest business project of the year will be the upcoming Travel Hacking Cartel (now launching in mid-January instead of early January due to “tired author syndrome”). This project will be an all-new business. It will bring the world of travel hacking to anyone who’s interested, and I’m looking forward to hearing many more success stories like the ones I highlighted recently.

I’m also thinking about limiting the initial membership of the cartel to a select group (probably 1,000-1,500 people or so) and then allowing future growth to come entirely by referrals from the initial members. The members will be rewarded with Frequent Flyer Miles and regular prizes for their referrals, and my hope is that the project will become fully self-sustaining.

In the Unconventional Guides business, I expect most of the growth to be vertical (through improving the business) as opposed to horizontal (by creating a lot of new products). As mentioned last week, Sean does a great job working with our affiliate partners and is only limited by my time and inattention. I’d like to fix that in early 2011.

I also plan to experiment a bit more with webinars next year, starting with a low-cost project on building community that we’ll do after the Travel Hacking Cartel launch dust settles. I’ve been making notes on this idea for months, but the all-consuming book tour kept me from doing it sooner.

Lastly, April will be the one-year anniversary of the Empire Building Kit. Since it’s been such an influential resource (many active businesses have been started by EBK owners), I want to celebrate the anniversary in some way. Because of everything else happening in my life, I may not be able to do a proper relaunch, but we’ll at least try to do something fun.

(By the way, during the review it’s also good to think about what you won’t be doing for any particular category. Because of the THC, the next book, and my plan to grow the business more vertically, I don’t expect to create a lot of new products next year.)

TRAVEL: The Next 20+ Countries

I have 41 countries left on my 192-country goal, and for the first time I’ve found myself needing to be strategic about how and when I get to them. I’ve made countless mistakes and false starts on the quest so far—last year I went to Fiji, which was great… until I found out that I can only get to Tuvalu and Kiribati from Fiji. Oops—so now I need to go back to Fiji. It’s also increasingly difficult to handle the visa applications for various countries, since some of them take up to a month to complete.

At any rate, I’ll be working as hard as I can to make it to at least 20 countries in 2011 and 20 countries in 2012, to ensure I’m on track to visit #192 as scheduled in 2013. A number of interesting places are on my list this year, including Iran, Yemen, Tajikistan, Libya, Madagascar, and hopefully fifteen more.

In addition to these trips, I have a book tour of Canada in January (every province!), and I’m considering a similar tour of Australia in October or November.

Lastly, I’ll be leading a (very small) group to visit our Ethiopia project, also in October or November. The details will be finalized a few months prior, and we’ll have a contest to bring along at least one AONC reader with us.

I don’t make an effort to separate my life and work—all of my goals are personal. But aside from the things mentioned above, I want to continue good habits of health and exercise (hopefully improving from the vodka-and-almonds diet of the book tour), maintain good relationships with my family and close friends, and keep learning as much as possible.

With AONC, I want to continue growing the community in a deliberate (but active) way. The Postcard project from this year has been fun, and I want to do something similar next year to highlight many of our great readers from all over the world. And of course, there is the small event I’m hosting next summer to bring together world-changers of all kinds.

Most importantly, I want to be aware of my surroundings and truly live a life of gratitude. This is the goal that supersedes all the others. I live a life organized around things that are important to me; nothing listed above is done out of obligation but rather a sense of purpose. I try to make time to be open to new things while focusing on the things I already know to be meaningful.

Every year I choose a theme to accentuate the goals I’ve chosen and provide a broad structure for the year. The theme of 2010 was scale and reach. I wanted to take what was working well and shift it to a higher level.

I struggled a bit with deciding on 2011’s theme, because in many ways it looks the same as 2010—I plan to continue the process of careful growth, keep traveling, keep challenging myself, and so on. But every year needs its own theme, so I can’t use the same one.

Earlier this year I had the idea to take flying lessons and eventually earn my pilot’s license. I don’t think I’ll be able to take all the lessons I need and accomplish the goal of learning to fly for a while (I’ll be spending enough time as a passenger!), but I like the analogy and the challenge it presents.

Therefore, I decided to make 2011 the year of taking flight. It will better than 2010 because I have learned a lot and will keep learning. I intend to fulfill the challenge, and I’m grateful for everyone who is such a big part of it.

Oh, and thanks for being part of a great 2010! Happy Holidays to all.

What is your theme for 2011? What are you most looking forward to?