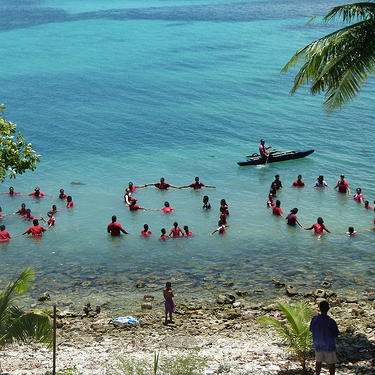 I did it. I made it to Tuvalu, the penultimate country! It took a while to get here, but that’s to be expected.

Someone said they spent 20 minutes reading the Tuvalu Wikipedia page the other day. I said I was surprised it took 20 minutes—that’s the same amount of time it took me to run the length of the entire island of Funafuti last night.

Anyway, 192 countries down. File under your choice of: Wow, WTF, tired, or awesome.

Something weird happened the other day: 2013 showed up. For me, it showed up all of a sudden, since I lost December 31 while flying overnight across the international dateline. But even so, it snuck up on me by more than just a day.

I’ve seen many of our readers’ Annual Review posts in the blog trackbacks, where some of you have been completing your own end-of-year analysis and looking ahead to this year. I’m glad to know the model has been helpful, and I’m sorry that this year’s review hasn’t been as comprehensive as year’s past.

The bottom line is that 2012 was fantastic, but it was indeed hard to not have the time at the end of the year to sort myself out.

All I needed was an extra week of December. You know, December 32-37? Next year I’ll plan better, but here’s what I’ve got this time.

So much with the past. Let’s look to the future! Here are a few of the things I hope to accomplish in 2013.

Finish every country (now an easier goal). With Tuvalu in hand, I’m now effectively at the end of the ten-year journey to everywhere. In April, we’re having a small party in Norway, the official final country—but hopefully that won’t be nearly as difficult to get to as it’s been for Tuvalu, Guinea Bissau, Eritrea, or any other number of countries along the way.

Lots of people are asking: “How does it feel?” And the honest answer is “I don’t know.” I don’t process things that way. It takes a long time for the depth and significance of accomplishments to set in, and often I don’t have important revelations about things until after the fact. When I know, you’ll know.

Write the next book. I’m now beginning the writing phase of QUEST (working title), my next full-length book. The due date is in August, which is a nice long stretch to work… when I’m not touring and doing other projects.

Launch of all-new biz. The long-awaited (and, sadly, often spoken of) new business project is still plugging along. It’s taking longer than expected, almost entirely because of my ineptitude, but the bottom line is that I’d rather do it right than rush it to market. Watch this space for more news soon.

Road trips, scaled. In about two weeks I’ll be going back on the road to meet readers across the U.S. First up: Santa Cruz, Santa Barbara, Pittsburgh, Detroit, Nashville, Columbia (Missouri), and Dallas. All of these events are reader initiated and hosted. All tickets are free or low-cost —sign up here and bring friends!

This is the introduction of an all-new touring model, and I’m very excited about the long-term possibilities for it.

The Tour Rolls On

If this next leg of seven cities goes well, we’ll be doing many more. I hope to plan a European tour and another Asian tour soon. If you represent an organization, business, or bookstore that would look to sponsor an event, let us know!

Host WDS 2013. Last year we had a big success with WDS 2012. This year, as you’d expect, we’re kicking things up another notch. This time we’ll be in Portland’s largest theatre, home to the Oregon Symphony when World Domination is not being conducted. Every seat will be full, and our team has big things planned.

WDS has grown far beyond my initial expectations. I’ve had my share of flops and failures, but this project has turned out very well by all accounts. I’m fortunate to work with great people on it, and we’ll be offering the final round of tickets to those on the waiting list very soon.

Continuous improvement. As mentioned a couple of times recently, I’m dissatisfied with numerous aspects of this little operation, and I have a long way to go. You, the readers, deserve better! And I’m trying. Thanks to those who have stuck with me for so long. I assure you the groundwork is being laid to improve everything we do at World Domination HQ.

And a More Personal Goal

In addition to the usual projects, I also hope to figure out my life and avoid being too depressed about the end of the world. I’ve been “seeing every country” for a decade, including the nearly five years that I’ve been writing about it on this blog. Now what? Perhaps it’s a first world problem, but running out of countries to visit does create a bit of an identity crisis.

I’ve also been sad lately for reasons I don’t quite understand, and I don’t intend to write about it all the time. I’ll find my way out, and I know that one of the keys is to focus externally, keep doing what I can to help people and make things, and so on. Anything else I figure out along the way will help.

What about you—what are your big goals for 2013?

Feel free to share a few things (or just one) that you hope to accomplish this year.

Next, better get to work … there are now only 363 days left.