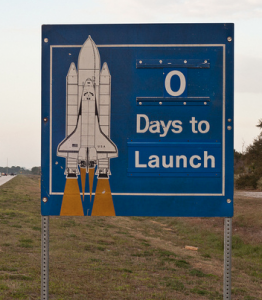 I woke up before 6am on Tuesday morning, eager for a big day. A product launch is always filled with lots of emotions, especially in the first few critical hours.

What would happen? Dun dun dun…

At 7:30 there was a knock on my door. It’s Nicky Hajal! Our genius developer (AKA “kid wonder”) had arrived from New York the previous day. Nicky was in town along with Wes and Tera, our media team, for a tour of venues for this year’s World Domination Summit.

More on that process later—for now, Nicky was also here to help out with Tuesday’s launch of the Unconventional Guide to Publishing, our first commercial guide in more than a year. Since he was staying about a mile from my house, we decided he would just come over in the morning so we could do the launch live from World Domination HQ.

The previous night, Nicky had dropped off a monitor he “borrowed” for a few days while he was here. (Thanks, Office Max!) The monitor was now on our living room table, and on our kitchen counter was what he called his mobile workstation. Take a look at this:

The setup looked suitably impressive to me, someone who has no technical skills and also no physical skills of any kind. (An unwritten post from last weekend: “Why Chris Guillebeau Is Not the Friend You Want to Help Assemble IKEA Furniture”).

As awesome as this workstation was, there was one small problem. Nicky connected a bunch of wires and antennas around the living room, and attempted to connect to the “liberator” WiFi network we use. After a few minutes, a furrowed brow was raised, and I heard lots of clicking.

Nicky was silent for a few minutes. Finally, he announced the small problem … the awesome setup wasn’t WiFi-friendly.

No internet? This act of aggression would not stand—Nicky spends about 15 hours a day looking at code on a huge screen (thus the Office Max monitor) and needs to be online to do it.

Meanwhile, the launch was coming up in about 45 minutes … with at least 30 more minutes of things we needed to do beforehand. I was mildly stressed about getting everything done on time with an optimal setup, but now we really had a problem.

Side note: there’s a GREAT book coming out in May called The $100 Startup. I just happened to be proof-reading the final edits last week, and noticed an entire chapter all about product launches. Whoa! If only I had such wisdom before Tuesday. More news about this AMAZING book later. Now back to the story …

Don’t you have a laptop? I asked Nicky.

Don’t you have an ethernet cable? He asked me.

Nicky hopped on my bike and rode back to his place to grab the laptop, and then to the grocery store to get an ethernet cable. (Yeah, it turns out grocery stores carry those … we were surprised too.)

Long story short, we kicked things off about 20 minutes later than planned. I wrote to our affiliates and apologized for the delay. It wasn’t terribly long, of course, and it’s always better to make sure things are going well before opening the doors to the masses, but nevertheless I still felt bad about the delay. To be safe, I delayed my own post here on the site an extra hour so that the affiliates who were rushing to get their posts up could do so first.

After getting underway, we still had a few problems. We’re moving everything over to our own in-house e-commerce system, which will be great… when it’s done. For now it’s still in beta, and most of the time it works well, but not always. A few users had problems with using Google’s Chrome browser. Others had issues making payment, logging in to a new account, or downloading files.

Thanks to Nicky’s real-time tech support, most of the issues subsidized within an hour or so. We got on a roll with lots of orders coming in, and began receiving good initial comments from customers who were accessing the materials.

Meanwhile, other members of our team were working from various locations. David was sitting in Southern California, patiently entrusting the outcome of this process to my hands. (No pressure, Chris.) Sean, our newly titled “Chuck Norris” Affiliate Wrangler, had just flown in from Denver and was managing email communication with various partners. Reese, our superstar designer, was doing site reviews of other projects in a coffee shop somewhere.

As they say, it was truly a team effort! Thanks, team.

On Wednesday, I cleared as many of my emails as possible, then sat down to review the order process. We still had a few challenges—some users had difficulty accessing their files, and others received payment errors when trying to check out. I knew that Nicky was working on that, and my skills are fairly limited, so I took a closer look at other things.

One thing I’ve learned with launches is that you can always improve results by making a few careful improvements, even after you’ve begun the process. In our case, the check-out page wasn’t as clear as it could have been. I revised it to clarify exactly what people would receive when they finished the transaction. If you’ve already purchased and something didn’t work as it should, check again—and don’t hesitate to let me know if you’re still having difficulty.

Another mistake I made in sharing the launch communication was in failing to explain why we had included several sample book proposals with the guide. When I was first learning to write a book proposal, I really struggled. I had written lots of different applications, proposals, and academic essays—but I learned that a book proposal is a very different thing. There’s a specific way you have to do it, and few good examples out there.

I totally forgot to highlight this fact about the launch, and David sent me a note about it:

In 20 years of doing this job I’ve always found that readers love it when I offer to send them an example of a proposal that has actually sold to a big house. And it’s extremely uncommon to get to see one that has sold for six figures. If you look at most of the books on proposal writing out there, they’re full of low-end, $10k titles and just aren’t very impressive.

Because David is the master negotiator, he was able to get us five complete proposals from books that sold for good amounts to leading publishers. Several of them sold for at least $100,000 and then became international bestsellers.

In addition to the 45,000 word guide and all the proposals, we also included a number of interviews with the guide. There are some surprising disclosures in these interviews, including long discussions on average selling prices for books, what captures an editor’s attention, and several good examples of marketing campaigns that helped new authors stand out in a crowded field.

All files, including these proposals and interviews, are available immediately upon purchase. All updates are FREE for the life of the guide.

Motivations, Thanks, and a Reminder

I work on a lot of different projects, and the motivations vary. In some cases, I want to create sustainability in my business. For some, I may be looking for a significant payday that will allow me to do other things that cost money. In others, like a webinar, I just want to do something fun and useful.

In this case, I was conscious of the fact that David put in a TON of work on this guide. We also had a ton of affiliates lined up to promote the guide, so for both their sakes—David and the affiliates—I wanted it to do well, not just during the launch period but on a long-term basis.

I really appreciate everyone who has supported this project by picking up the guide or spreading the word along. As mentioned earlier in the week, at least 80% of people say that they want to write a book sometime in their life, but only a small minority actually do it. Our goal is to help more of the 80% move into the minority.

Also, one final reminder: the special pricing for the Hemingway version of the guide expires tomorrow night (Friday) at midnight. David will also be hosting a special Q&A call for buyers at all levels who purchase before the deadline. After that, the guide will be in the shop on a long-term bonus, but without the bonuses.

Otherwise, thanks for being a part of AONC. Much more is on the way!

Question for those who are still reading: What’s the one thing you wish you knew more about?

Win an $1,800 Scholarship to Adventure Capital

Tomorrow: How to Leave Debt Behind and Master Your Money
© 2023 The Art of Non-Conformity | Site by Bytegrow Technologies