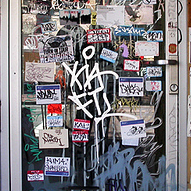 A funny thing happened on the way to San Francisco. I was headed down on a super-quick trip (just three hours!) to do some filming for a friend. I’d leave PDX in the morning and be back in the early evening. No big deal, right?

Tuesday morning I grabbed my laptop bag and headed to the airport by taxi. The whole time I was en route, something felt weird: I didn’t have my usual carry-on bag. I take that bag everywhere, even for a single overnight trip, and am never without it while traveling.

Except this time. Who needs an overnight bag when they’re just commuting for an interview and then coming home the same day?

The thought crossed my mind: wouldn’t it be random if today was the day I got stuck somewhere? I don’t have my stuff! I don’t have any other clothes!

Funny Story About That

At PDX I set up shop at Starbucks and got an email alert. My Alaska Airlines flight was delayed 30 minutes. Hmmm, that’s not great. I had a tight window for the filming in SF. There was a buffer of about an hour, but not much more.

You probably know what happened next. Thirty minutes turned into an hour, then ninety minutes and finally two hours. The whole time I was working on my laptop while considering alternatives. What to do?

I was going down to SF to see Ramit Sethi, an expert on negotiation and psychology. Ramit and I have known each other for a while, and he asked me to film a segment in his studio for an upcoming course.

I should explain now that Ramit and I, along with Jonathan Fields, have the habit of calling everyone dude, regardless of their age or gender.

Dude, flight delay up here. What should I do?

Just kidding—Ramit didn’t actually say that. He was busy filming someone else, but I heard from his assistant and we quickly looked at the schedule together.

Could we adjust the studio time? Yes. Would I make it back home in the afternoon? Nope. Could I get home later that night? Maybe.

I was already at the airport and the studio had been rented, so we decided to go for it. The flight finally boarded. Off to SF!

The whole time I was trying to get down to California, I was working with our small team on another project: the release of Adventure Capital, our new course. When was that supposed to be?

Oh, right. It was YESTERDAY. As in, the day after my “super-quick trip” to San Fran.

Things were tight all around. Several of us have been busy planning for the upcoming World Domination Summit (happening in 35 days! OMG!), and the product launch plans had come down to the wire as usual.

Earlier this year I fell into a bad habit of delaying things. Prior to that I had been fanatical about meeting deadlines. If I was five minutes late to a lunch meeting, I’d be upset with myself.

But then things started slipping. I missed an earlier deadline for the beta launch of this course, and then another—before finally getting it out last month.

Being late isn’t a good habit to be in, so I’ve been taking steps to correct it. No more deferring! Ready or not, we were going to move forward.

Not Even Alaska Airlines Could Hold Us Back

I decided that even if I was stuck in another city with only the clothes I was wearing and a credit card in my wallet, we’d persevere.

Yes—not even Alaska Airlines could prevent this project from getting off the ground.

I started making plans. If I had to stay, I’d book the Hyatt at Fisherman’s Wharf, asking them for a toothbrush. I’d go to a drugstore and buy contact solution. The great Chipotle was right around the corner—I could hit it up for dinner and then work from my room. We could do this!

I got to town, rushed into another taxi, and hurried to the studio. Ramit was great and his crew was professional. We jumped right into filming and completed a full hour segment.

Then I had to make some decisions. Stay? Try to get back? I called Alaska Airlines, then called again.

It was touch and go for a while, but then the late flight opened up. I could make it!

I headed back to the airport (again!), had a large bottle of sparkling water and a small glass of cabernet, and finally boarded my homeward flight after 9pm. I’d be getting home super late, but at least I’d be home. And whether I was home or stuck in San Francisco with no clothes, I knew we’d be proceeding with the launch either way.

Last week we held a contest with hundreds of entries, offering a full scholarship to the new course. As usual, it was tough to choose the winners.

Some people made video entries, others wrote poems, and others brought vanilla bean scones to my doorstep. Actually, no one did that and I’m glad—please don’t show up on my doorstep. I’m not always home.

Many of the people who entered the contest had great stories and ideas. I love reading comments and hearing what you guys are working on. In fact, over the next few months I’ll be working on something that will allow more great people in our community to share their own stories.

More on that later; for now, the winners!

I import several important products and in terms of their social implications, they need to be successful (hemostat, UV protection). I’ve sought out business mentors, but few are understanding of a non-traditional company structure here in New Zealand.

Having a group for ‘back-up’ as well as an external kick in the pants will help. I’m self directed, but I wonder if what I’m doing is ‘correct’. I am not interested in reinventing the wheel, only helping people live safer, healthier lives… I’m also someone who would actively pay it forward and look to help others with non-traditional business models here.

I worked as a freelance English language tutor for two years before taking the plunge last year—renting premises and employing another teacher. $100 Startup was super helpful at this point.

We’ve had an OK first year, currently running at about 100 students and I think we’re at a really good point to push on. The Adventure Capital scheme could be great rocket fuel on the fire.

Thanks to everyone who entered. I hope you display the same enthusiasm at growing your business, whether or not you end up in Adventure Capital.

I finally made it back to PDX just before midnight, taking yet another taxi home. The next morning I got up and flipped a few switches. There it goes! Adventure Capital is now live and ready!

And then I did a funny thing: I didn’t tell anyone about it.

Why? Well, things had been super busy… and I wanted to make sure everything was working as it should.

Also, our members from last month’s beta launch are now able to promote the course on their own, and I wanted to give them a head start before I kick things into gear on my side.

While I was frantically working on things at the San Francisco airport, I saw this tweet from Scott Belsky, another friend.

I liked that idea, and since I hadn’t done much to promote the new course in the morning, I decided to stick with it throughout the day. It was kind of … quiet. But also nice.

Adventure Capital is out to the world, some of the original beta members are writing about it, and I’ll say more next week.

If you’d like to join, you should join. It will help you grow a small business and make more money. We’d love to have you around for the next year.

If you’re not interested, then… don’t join. Life is short and you should spend your time on things you’re excited about.

Question: Have you ever been stranded on the road? What happened?

Win an $1,800 Scholarship to Adventure Capital