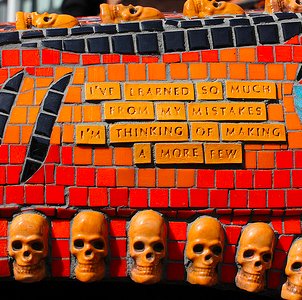 I’ve been self-employed for more than fifteen years, but it hasn’t always been easy.

I once had the bright idea of selling a golf membership service for $1. (It was actually a very bad idea—no one told me you can’t make money on $1 per customer.)

Another time I tried to launch four projects on the same day. (Another bad idea—none of the four projects did well because my attention was so divided.)

When I wasn’t burning down houses as a teenager or failing to ever learn algebra, I was fumbling along from project to project. I always made a decent living, but it was hardly strategic.

You don’t have to have it all together when you start. You start from where you are, and—this point is critical—you get a few things right.

“Behind every great business is an entrepreneur who’s pretty sure she’s screwing up.”

The fear of screwing up rarely goes away forever, but you have to find a way to separate it from your ability to make progress. You create the right product or service. You find a market of people, even a small one, that wants to pay for it.

I always tell people who are beginning a creative career to go back and look at the early work of artists they admire. If you come across a successful blogger, designer, or artist, especially one who’s been able to generate a full-time income from their creative work, it’s easy to be intimidated.

That’s why you should go back to the beginning—see where they started, and see how it all began. When you do that, you’ll be able to see the progress along the way, most likely including a few mistakes.

In my case, the compass points are independence and gratitude. Much of AONC has been built on an anti-authority construct, the idea of being “self-employed for life” and answering to no one. I still believe in this value. There are far too many people who feel trapped in dumb jobs. They need to escape!

The other part of obtaining creative freedom is sheer perseverance. Just kept going!

Seth Godin once talked about his failures in the context of eventual success:

That’s how I feel. Failure sucks but failing to try is far worse. The life of creative freedom is worth fighting for.

In just under two weeks we’ll be releasing our biggest Unconventional Guides project in more than a year. The goal is to help artists, designers, crafters, and “makers” of all kinds achieve creative freedom through self-employment.

A few years back I launched the Empire Building Kit, a resource that focused more specifically on online business. This new resource is essentially an Empire Building Kit for creatives of all kinds. If you’re a designer, artist, crafter, or “maker” of some sort who wants to sell your work—not just make it for fun—this project will show you exactly how to do it.

I haven’t been this excited about a new resource in a long time. On Monday we’ll share more of the lessons from some of the people featured in the new project, and next Thursday we’ll have a complete sneak preview along with a fun giveaway.

Question: What do you think about creative freedom? Have you made mistakes in pursuing self-employment?