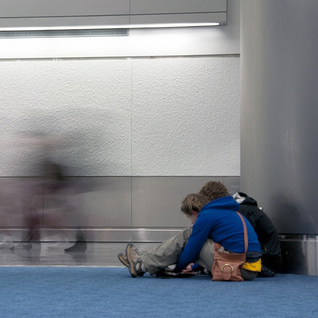 In JFK I got on the 16-hour Cathay Pacific flight to Hong Kong. It was 3pm in the New York afternoon, and 3am in HKG—exactly halfway around the world.

I always set my watch to the destination time when boarding a flight, so it was now sunrise in Hong Kong… with 13 hours to go. What’s next?

I like long flights, but this was pushing it even for me. I had the whole day set out before me, with nowhere to go and nothing much to do except what I made for myself.

I ordered coffee and sparkling water, then set up shop and got to work on a series of tasks. By the time I arrived in Asia, I hoped to:

I got down to work on these tasks and found fulfillment as I go through the list. I also watched half of a movie, which is all I can usually handle, and caught up on an important game of Kingdom Rush on my iPad.

The day in North America faded away as we began our flight across the Pacific, chasing the sun. The day in Asia went by and the sun finally disappeared outside my window.

Did I use this time well? Did I feel alive, and did I do something that mattered?

I remember watching the entire day unfold like this in other parts of the word. I remember the long bus rides through Africa that stretched out over hours that seem endless.

Sure, there are some obvious differences between African buses and Cathay Pacific Business Class. But there is so much similarity too. In either mode of transport, you wait. You keep waiting. And you wait some more.

One time I rode the bus through the night and into the next morning. The day after, the same disorienting feeling: another day passes by outside the window. We change borders and there’s a new stamp in my passport, but the world looks the same.

I feel this way on ferries, on trains, on long drives through the U.S. Always getting closer to something while putting distance behind something else.

But really, what is life but to love and to create? And to keep moving along, always choosing forward motion and never backtracking.

I staggered off the plane at 8pm local time. I still had another flight ahead of me, a three-hour hop to Bangkok, but first I sat on the floor of HKG airport and logged on to the world. Greetings, everyone.

My outbound messages lept into space and a flock of new ones swooped in, the yin-yang of email management.

When I walked to the lounge and prepared to board the flight, I was already moving on. Time to think about the next stop, the next project, the next level of the tower.

What are you working on over there?

If It Matters, You’ll Find a Way