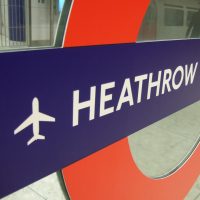 be yourself, heathrow terminal 5, ittybiz, know your audience, naomi dunford

Live from Heathrow Terminal 5: Knowing Your Audience, and a Quick Survey

Greetings from the colossal series of structures known as Heathrow Airport, 45 minutes from central London on the underground. When the new Terminal 5 opened a while back, it was a huge mess. Thousands of travelers were stranded, the computers failed, and luggage had to be driven to Italy on a truck.