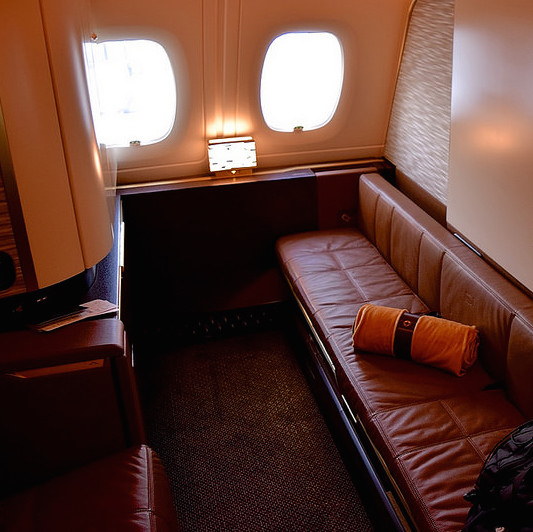 It’s a brand new year, and that means it’s time for change—both in life (because why not?) and in travel.

Every year I earn more than one million miles and points, which I then use for free travel all over the world. For a long time, travel hacking was my primary tool for going everywhere. It allowed me to see the world without declaring bankruptcy.

These days, I don’t jet off to Kinshasa or Katmandu very often, but I’m still in the game. Even without paying attention all the time or doing crazy things like making a hair-loss appointment to earn miles, I’m still able to get more than enough miles and points to have experiences that would otherwise be inaccessible.

In this post I’ll run through a couple of my travel goals for the year, as well as the travel hacking strategy I’ll use to achieve them.

Last year, after completing the filming for Make Your Dream Trip a Reality, my travel hacking colleague Stephanie and I each fulfilled a longtime dream of flying First Class on Emirates from Los Angeles to Dubai, and then from Dubai to Singapore.

Oh, and now that I think about it, I was also able to travel on Qatar Airways First Class more than once.

Experiences like these are why I still enjoy earning a lot of miles and points even though I no longer have the need to visit faraway places in pursuit of the quest.

Anyway, this year I have a new goal: travel in “The Apartment” on Etihad. What’s The Apartment? Think of it as a room in the sky.

Emirates and Etihad are cutthroat competitors, located in hub cities less than two hours apart in the same country. Not to be outdone by the Emirates bling, Etihad recently introduced something bigger-and-better.

When flying in The Apartment (the capitalization is a nice touch), you don’t just get a lie-flat bed, or even an in-flight suite. You get an entire room on a plane! No joke.

If I had such a thing as a bucket list, this would go straight to the top. But I don’t have a bucket list—whenever I want to do something, I find a way to do it.

Even though I’d love to see the double points post on my statement, I won’t be using my Chase Sapphire Preferred to pay for it. Instead I’ll be using just 60,000 American Advantage miles to book it.

To state the obvious: this is a huge disparity in using points or paying cash.

It’s not hard to earn 60,000 American miles. Even if you don’t have any at all—and even if you never fly American Airlines—you can transfer them into your account from Starwood Preferred Guest. (And you are earning SPG points, right?)

Oh, and even if you don’t have transferable points, you could just buy the miles directly from AA for less than $2,000 and save more than 80%. Yes, you should feel bad for people paying full-price, though presumably some of them are the kind of people who don’t care.

I already have a booking on hold for this goal, and of course I’ll let you know how it turns out.

In the past I’ve used travel hacking to visit 30 or more countries in a year without breaking the bank. Now, I’m using the same tools to enrich my life and support the work I do. It works!

This year I also plan to return to my favorite country and then go on a 30-city U.S. and Canada tour, which is a very different kind of travel but still something I enjoy.

And of course, I plan to requalify for the highest level of status with my main travel brands: American Airlines (OneWorld), Alaska Airlines, Hyatt, and Starwood. I’ll probably earn some other status levels in addition to those, but those four are the priorities.

Do you have an awesome travel goal for the year?