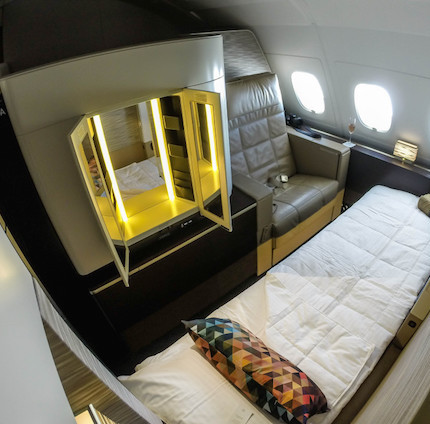 Earlier this year I identified a new travel goal: to fly in the Etihad “Apartment,” a full-on suite that’s included on their A380 aircraft on certain routes.

Well, as of last week I can now say “mission accomplished”—I flew in The Apartment from Sydney to Abu Dhabi, a 15-hour journey. The short version of the flight is: it was amazing.

Here’s how it all went down.

Quick Visit to My Favorite Country

To begin the experience I flew to Sydney, Australia—otherwise known as the best place in the world.

Unfortunately I didn’t have time for a proper extended visit this time, so I had no meetups and just completed my usual rituals, which always include a stay at the Park Hyatt Sydney and a run across the Harbour Bridge:

I’ll have to return to Australia before too much longer, but in this case I wasn’t terribly sad to leave, because my method of transportation was pretty nice. 🙂

I got to take the Etihad flight with Stephanie Zito, my longtime friend and colleague who co-founded Color Cloud Hammocks and is also a partner in the Travel Hacking Cartel. Stephanie was traveling in Melbourne the previous week, and met up with me in Sydney before the flight.

We got picked up at my hotel by a complimentary chauffeur, provided to all guests booking The Apartment. The driver was very friendly and delivered us straight to the terminal, where we spent time in the nice Etihad lounge before boarding.

And then the time finally came … we walked to the gate and boarded the plane, turning left after the jetbridge and heading to our seats Apartments in 3K and 4K.

The Big Surprise: We Got the Whole Cabin to Ourselves!

OK, the headline says it all… but when we boarded, we were first extremely impressed with our two Apartments.

Then, we were blown away to hear that no one else would be in the cabin. That’s right, for the entire time, it was just the two of us and three cabin attendants (including a chef!) looking after us.

Since no one else was in the cabin, Daniel the chef suggested we use another Apartment for our meal service. That was a great idea, because we could just hop over to dine and then hop back to our seats (well, the couch, the bed) without resetting anything.

The Etihad A380 also includes a shower for Apartment guests, which of course is amazing. Who doesn’t want to shower in the sky?

We had a glass of champagne and prepared for takeoff, feeling grateful and excited for the rest of the trip. Once we were up in the air, we had another drink and then prepared for what promised to be a very comprehensive dinner.

Fine Dining in the Sky: What Did We Eat?

As far as I can remember, we had, um, a lot of different things. Stephanie and I are both pescatarian, meaning we are mostly vegetarian but also eat fish. We had pre-ordered one Indian-style vegetarian meal, so that was served along with everything else.

Take a look at a few pages of the menu (there are others!) to get an idea for what’s available:

We ordered the mezze (vegetarian version), pretty much everything else that was vegetarian, and the fish. To drink we started with more champagne and then let the cabin crew suggest wine pairings for the rest of the food.

We finished with a dessert surprise: Daniel said “let me take care of it” and then brought out a plate with one of everything. Now we’re talking!

Sydney to Abu Dhabi in 15 Hours!

After the meal I slept for maybe 4-5 hours in a very comfy bed, but was so excited that I woke up to experience more of the flight.

I didn’t watch any movies, but at some point we discovered that the handset could be used to send text messages from seat to seat. Since we were heading to the Middle East and had seen a sheik in the Sydney airport (who was apparently traveling on the Emirates flight), we enjoyed amusing ourselves with various comments that seemed appropriate at the time.

At some point we had tea, and then a bit later we had breakfast, which was also comprehensive and high-quality. I headed off to take a shower in the sky and then sipped a coffee as the sun started to rise in our descent.

When we landed in Abu Dhabi, I was eager to check my email (there was supposed to be in-flight WiFi, but it didn’t work—one of the only disappointments), but aside from that I was genuinely sorry to leave the aircraft. We said farewell to the crew and then we looked at each other and said “WOW. That was fantastic.”

How to Book Your Own Apartment

Okay, you may be wondering: “This sounds awesome, but how can I do it?!”

And there’s good news: at least for the moment, it’s pretty easy. This flight costs only 60,000 American Airlines miles, which is an insane value. People sometimes spend that many miles on a Standard U.S. round-trip award in Economy class, or an Economy award to Europe.

There’s no way in the world this experience should be only 60,000, and after March 22, it won’t be. AA is devaluing their award chart, and the new rate will be 110,000 miles—still worth it, in my opinion, but obviously nearly twice the current rate of 60,000 miles.

Here’s a tip: if you book before the deadline, you can change the date of the trip up to a year from time of booking. In other words, if you have AA miles and you might want to do this, book now.

Also, there’s a trick you should know about. For some weird reason, when you call the AA U.S. number, agents won’t be able to see the award space. But if you call the AA Australian number (by Skype or similar), the agents can easily see and book it. As I said, it’s weird. The good news is that most people don’t know this, so availability is still pretty good.

As I was preparing this post, a brand-new travel hacking offer popped up that is great for earning AA miles. For a limited time, you can earn 35,000 points each for getting the Starwood Preferred Guest cards (personal + business) from American Express.

SPG points are transferable to more than 30 airlines, including AA, and when you transfer there’s a 20% welcome bonus.

If you get both cards and transfer the full 35,000 points each, you’ll end up with 85,000 AA miles—more than enough to book The Apartment at its current rate (remember, you can change the date for the actual flight for a year), or well on the way to booking at the higher rate once the devaluation kicks in.

If you don’t have AA miles and you can get U.S. credit cards, this is a great way to do it.

Oh, and this isn’t the only good use for SPG points—I’ll have another post soon that outlines different options. In short, it’s just a great deal and the highest-ever welcome bonus for the Starwood cards. I have both of them myself and use at least one every day.

If you can’t get U.S. cards and don’t otherwise have an easy way to earn AA miles, you’re not out of luck. You can purchase miles from AA (regardless of where you live). A few times a year they have sales where the miles are 30-40% off.

This isn’t “almost free,” of course, but it’s still much, much cheaper than buying the ticket. In my opinion, it’s an incredible experience that’s worth trying however you do it.

In case it’s not obvious, I was really impressed with this trip, both the experience itself as well as how cheap it was with miles. Travel hacking opens the doors to lots of amazing experiences. In this case, it opened up an entire cabin!

Now that I’ve accomplished one of my major 2016 travel goals, the only question is: how to top it? I’m still working on that, but in the meantime I’d be very happy to go back and do the same thing all over again.

Where’s your next trip? Will I see you in the sky somewhere?