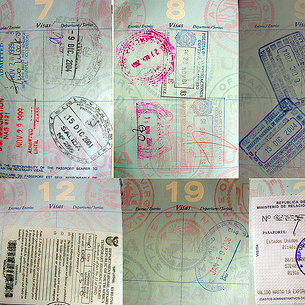 This post is relevant for readers with U.S. passports who travel frequently. If you don’t fit in that group, feel free to skip this one – or just read it for the entertainment value.

I’ve mentioned a few times that I have two U.S. passports, and each time at least one person asks me how that works. Well, I’ll you exactly how I got the second passport, and what you need to do if this would help you as well.

First, the need for a second passport. Why bother?

U.S. passports are good for a number of reasons: notably, they are valid for 10 years, and when you fill up the pages with lots of stamps and visas, the State Department in Washington, D.C. or any embassy abroad will issue more pages at no charge. I’ve had three passport page extensions so far, and without that option I would have needed at least four passports by this point. No other major country that I am aware of offers a passport that includes both of these important features.

As good as a U.S. passport can be, there are still two problems with having only one passport of any kind. First, when you visit politically sensitive countries (especially in the Middle East), the ensuing stamps can cause delays and other problems for you later.

When I recently came back to the states via Miami, for example, the immigration officer had a least a dozen questions for me as he flipped through the passport. Among other things, he asked me:

Why did you go to Pakistan?

How many days were you there?

Who did you meet with?

Who paid you to go to Karachi?

The irony here is that my trip to Pakistan was a while back, and when I returned to the U.S. at the time, I was waved through without any questions at all. This goes to show that when it comes to immigration, you never really know what’s going to happen until you approach the desk.

I should also mention that the questions are not always confrontational. Many immigration officers are impressed with so many passport pages and stamps, and several have even congratulated me. However, the occasional interrogation is enough to cause me concern, especially when I’m far away from home and relying on the mercies of an unfamiliar country.

Second, as I go further and further throughout the world, I frequently need to arrange some of my visas in advance by applying within the U.S. Some countries do not offer visas on arrival or allow travelers to apply from a third country, and if my passport is in the hands of a consular officer for weeks, then obviously I can’t go anywhere until I get it back.

Thus, the problem: to travel to fun places, you need visas, which require you to send off your passport for a variable length of time. While your passport is sitting somewhere, of course, you can’t go anywhere else. This makes travel hacking and advanced travel planning difficult.

How to Fix the Problem

The U.S. government allows independent travelers to obtain a duplicate (i.e., secondary) passport as long as you can demonstrate a need for it. Specially, you need to:

1. Fill out an application

This is easy. The application is here.

2. Decide if you want to use a service company

You can do this on your own and save at least $50. I used a service company (A Briggs) mostly because it looked easier to me. I’m not a journalist, so I wasn’t sure if the State Department would reject my application if I sent it in myself. The company was actually quite helpful, so in this case I’m glad I spent the extra money.

3. Write a letter explaining your need for a second passport

You need to write a one-paragraph letter explaining why you need two passports. It helps if you can include an upcoming itinerary to sensitive countries, or at least a record of frequent international travel in the past.

4. Submit the application and the fees

The cost is US $135 plus whatever fee is charged by the service provider if you use one. Also, note that the second passport is only valid for two years. Unfortunately, you can’t get a second 10-year passport.

Having the second passport has already helped me several times, by being able to send off the new one to random embassies (Russia, Eritrea, etc.) with no real worries since I have another one safely in my office.

In fact, while the increased travel freedom is good, the greatest benefit of having two passports is peace of mind. I don’t have a lot of “treasured possessions” – I value experiences much more than physical things — but if forced to pick something, I’d reach for my 100-country passport. Have you seen all the stamps?

As mentioned in the beginning, most people need only one passport. But if you’re adventurous, this may be what you need. If not, at least you know how it works.

28 Things I Wish I Knew Before I Started Traveling

One Free Ticket, 18 Hours on Amtrak, and Many Interesting Passengers
© 2022 The Art of Non-Conformity | Site by Bytegrow Technologies