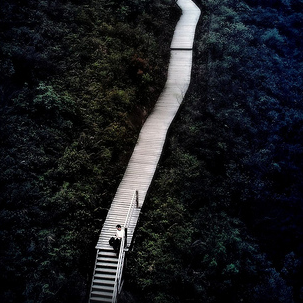 The title comes from Haruki Murakami, who in turn took it from Raymond Carver.

Since I started this site in March, I’ve been to more than 20 countries in pursuit of my goal to visit every country in the world. It’s going well so far, and I’ve made even more progress than expected. Next year I suspect it will get much harder, but we’ll take things one trip at a time.

As the community here has grown, I’ve noticed that I receive at least several emails a day with the same kinds of questions about travel. I’m making a full FAQ later for the upcoming site redesign, but I thought I’d go ahead and publish this one now.

Each of these questions has been asked by readers via email, Twitter, or the comments sections. If I missed something, feel free to let me know, and we’ll add it in.

This requires a multi-part answer:

Round-the-World (RTW) — For most of 2008 I’ve been traveling on OneWorld and Star Alliance RTW tickets (one of each). These tickets have a great deal of value, especially if you optimize them well and begin the trip from certain countries that are cheaper than beginning in the U.S., Canada, or Europe.

For example, my Star Alliance ticket was purchased way back in the summer of 2007. I traveled on it then for quite a while, including visits to Uganda, Taiwan, and Malta, and then I used an awards ticket (see below) to come back to Seattle for the rest of the year.

RTW tickets are valid for a full year and are quite flexible. Date changes can usually be made free of charge, and you can even reroute the entire itinerary for a reissue fee of about $150. When I went back out the second time, I re-routed so I could visit Northern Iraq, as well as Poland and Bulgaria.

Regional Passes – Like RTW tickets, regional passes are fairly flexible and allow you to visit multiple countries for a fare not much higher than a simple round-trip flight. In late 2006, I took my first “Circle Pacific” trip on Star Alliance, which allowed me to visit Hong Kong, Vietnam, Burma, and Singapore. I stopped off in Seoul on the way in and in Auckland on the way out.

After that experience, I was hooked and started learning more about the whole process. I haven’t done a regional pass since then (because I’ve been using the RTW tickets), but I’m thinking about doing another one sometime next summer.

Awards Tickets – Because I’ve earned so many Frequent Flyer miles, I use them to get to and from a jump-off point. I don’t like to be away from home for more than two weeks at a time, so I will sometimes break off a long trip in the middle, come home for a month, and then go back out for the second half.

One good thing about the process is that after you get it started, you’ll naturally earn more miles, and then by the time you need them for the next trip, they should be in your account.

Budget Airlines & Overland Travel – To get from place to place once I’m in a region, I prefer to travel overland if possible, and then on a local, budget airline if not. There is a great site called Attitude Travel that maintains a directory of budget airlines all over the world. Some of these are better than others, naturally, so do your research before buying a ticket.

There is a lot to the process (I’ve probably spent more than 100 hours learning about it over the past year), so at some point I plan to write an eBook specifically about the subject. But you can also learn a lot on your own if you’re willing to put in the time, and you probably need just a few hours to get the basics.

The two major airline alliances offer the kinds of RTW tickets that I use: OneWorld and Star Alliance. I also participate in the FlyerTalk forums from time to time, which have helped me a lot. If you need an expert for a specific question, Flyertalk is definitely the place to go.

This is one thing I don’t like about the airlines. In short, you don’t usually have to take no for an answer. If you check on specific routes yourself and keep calling back, you can usually make something work. I’ve booked dozens of awards flights now, and only had to give up on two attempts. But you’re right – the airlines definitely don’t make this easy.

(For more, check out the Unconventional Guide to Discount Airfare. 100% satisfaction rate so far, and lots of great reviews.)

There is no best program for everyone, because it all depends on your location and what kind of travel you’ll be doing. I have memberships with at least eight airlines (I lose count sometimes). This year I have been maximizing my flights on OneWorld and using American Airlines. I’ve earned more than 140,000 miles this year on American, putting me in the highest-tier of their elite program. I’ll probably use these miles on another OneWorld partner to allow me to get to a place I haven’t visited before.

If you live in North America (or even just visit there once in a while), I generally find that some of the U.S. Frequent Flyer programs are better than the Asian or European ones. This is in contrast to the airlines themselves, but even when I was living in West Africa, I earned all my miles on U.S. carriers.

ATMs work well in a lot of countries, but not all. I find that it is usually easier to travel with cash in much of the developing world, even in places that have a decent ATM network.

The secret is that instead of being harder, it is actually easier to carry less stuff. If you’ve never done it, trust me – traveling with only carry-on bags is much less stressful than worrying about a huge backpack or suitcase. Speaking of that, check out the site OneBag.com for some great information about how you can pack everything you need for weeks at a time into one bag.

My system is not as sophisticated as theirs – I mostly just try to avoid taking anything I don’t really need. Running shoes take up the most space.

(Also, I wrote about this briefly in Beginnings a while back).

I am a low-tech traveler. I use a $500 Dell laptop, a $150 Canon digital camera I bought on eBay, and I don’t have an international phone. I’ve thought about getting some kind of world phone or maybe a Skype handset, but haven’t done so yet.

Yes, usually, and yes, sometimes. But that’s OK – loneliness is not necessarily a bad thing. I do some of my best thinking and planning while traveling. Several times recently I’ve met up with other travelers in guesthouses or bus stations, and it can be fun to travel with others for a while… but I don’t usually plan for it in advance.

It varies depending on where I’m going and what else is happening. The range is from a few hours (Luxembourg) to several years (when I lived in the Philippines as a child, and in West Africa for most of 2002-2006). The average, at least since I’ve been traveling more frequently, is probably about a week. You can learn a lot about some places in a short time, just as it’s possible to stay a long time somewhere but not learn much at all.

I don’t have just one. But countries I have especially enjoyed include the Netherlands, Macedonia, South Africa, Ghana, Syria, Hong Kong, and New Zealand.

I have no set schedule. Sometimes I meet people, and sometimes I am by myself the whole time. The only consistent thing is that I try to walk around a lot. I walk about 4-6 hours a day most of the time while traveling, although in countries that are especially hot, it’s a bit less. I also need to arrange at least 2-3 hours a day to do some writing and online work. This is easier in some places than others, so often it takes some time trying to get this set up. Otherwise, I do whatever I feel like doing.

Thanks! So far I’ve received unsolicited hosting offers from Turkey, Denmark, Australia, Brazil, and a few others. That’s awesome. I don’t really post a schedule in advance of going somewhere, but before a major trip I’ll usually post an update of the expected highlights. Send me a note sometime and maybe we’ll meet up.

Yes, compared to poorer countries, it is relatively easy to travel with a passport from the U.S., Canada, European Union, or other “status” countries. However, just because it is relatively easy does not mean that most people do it. There are a lot of North Americans who never leave home. Also, every passport has its quirks—there are a few places that are actually somewhat difficult to visit with a Western passport.

In short, most of us can’t change the citizenship we were born with, so I tend to think it’s best to work with what you have and not blame others just because they were born somewhere else.

Because I like airports, and I like flying. I try to appreciate the process of travel itself as much as the destination. Some people think that travel in a globalized world is a standardized experience, but I believe it’s more complicated than that. I realize the detailed posts about flying and going from place to place are not for everyone, but many people seem to enjoy them.

The list is of places I’ve already been. Don’t worry; yours will come up at some point.

To be honest, it wasn’t something that I thought about for a long time. I grew up when being environmentally concerned was not exactly mainstream, at least where I was. Now that we all know better, I do try to limit my overall environmental impact, not just the impact that comes through travel. I don’t own a car, for example, and I use public transport whenever possible.

At the same time, though, I don’t think travel is inherently bad — in fact, I tend to believe the opposite. Instead of trying to convince people to stop flying, I think it’s better to focus on alternative energy sources and creating a sustainable world for everyone.

I’m sorry. But I will probably not change to do it your way – feel free to travel as you think it should be done and start your own blog about it. I believe that everyone can find their own travel philosophy based on their own goals and what travel means to them personally. It’s a big world, and we don’t have to all be the same.

Image by Eric A.