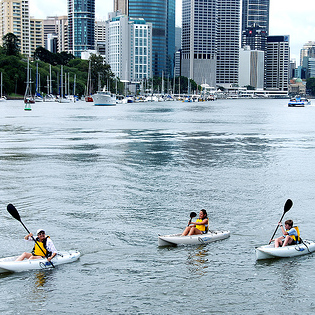 It was all going so well. I had made it to three island countries in the Pacific: Marshall Islands, Micronesia, and Palau. All of them were interesting in their own way, if a bit small.

OK, small isn’t the word: they were tiny. There is literally one road in Majuru, the capital of the Marshall Islands. Someone wrote me and said they had spent two years as a Peace Corps volunteer. What did I think of it? I said it was nice enough, but would have been a long two years for me.

After that I had a side trip to Uzbekistan, which greatly exceeded expectations. I went for a long run and wandered, feeling like my old traveling self.

Then I flew on to Brisbane, Australia—a major country I’d never made it to for some reason. Yep, I’m well over 150 countries now, but had never been Down Under. I had hoped to do a book tour in Oz this year, but it’s been pushed into 2012.

At any rate, my visit to Brisbane was only transit—I was going on to Nauru—so because Australia is such a special place, I wasn’t going to count such a short stop as a country visit. The plan was to put it off until I could appreciate it properly, the theory being that I’ll count a short stop in Micronesia as a country visit, but not one in the great Australia.

Until, that is, I got stuck.

After a fun day trip in the city (I actually played the role of tourist for once), I pulled up to the counter of “Our Airline” in BNE airport. Yes, the airline is actually called Our Airline—it’s on the shortlist for “most random airline name” in the world.

I was glad that everything had gone so well on this trip. Four new countries! Getting so many at one time is tough for me these days, with less than thirty to go. And now I’d be going to my fifth, and a difficult one at that.

Most people haven’t heard much about Nauru. You can get the gist of it here—in short, it’s the world’s smallest island that is also a country. About 7,000 people live there, and as I soon discovered, less than ten people visit on the average week.

I said hello to the friendly Our Airline representative.

“Do you have any baggage?” she asked.

Of course not. I might travel with vodka in 3-ounce bottles on occasion, but I’d never, ever check a bag.

“And where is your visa for Nauru?”

That’s when I realized I had a BIG problem. A visa for Nauru? No visa, no boarding pass? You’re kidding.

Of course this was all my fault, but I had at least dutifully checked with my visa service before leaving on the trip. You can see what they said about tourist visas and Nauru in this screenshot:

“Visa not required … but actually it is.”

Of course, VisaHQ is not the judge of who actually gets to visit the country. For that, I met the consulate at the airport, who was working an adjacent check-in counter. Yes, it appears that Nauru’s high representative to Australia (and therefore the world, since they don’t seem to have any other embassies) works the night shift at Brisbane airport. This makes for a good story, but didn’t help much with my visa—she was busy arranging oversized baggage and said that immigration questions could only be handled at her day job. What to do next?

I immediately began thinking of alternatives. What else could I do? Where else could I go? I knew I’d need to get online to figure things out as quickly as possible. It was almost the next day and I had no plane ticket, no hotel, and no plan.

On Australia and the Internet

At this point it would be good to mention an interesting fact about Australia. I’ve long been obsessed with visiting Oz, and there are many great things about the country. One challenge for the modern traveler, however, is that for all practical purposes, the internet has not actually arrived in Australia yet.

I had been warned of this fact by fellow travelers, as well as numerous Australians who have traveled abroad and experienced the wonders of easily accessible WiFi, only to return home to the dark ages. (Presumably they pop over to New Zealand to read their email.)

This fact is relevant because Brisbane airport is quite spiffy and modern, but seemingly has no WiFi of any kind in the landside area. I was directed instead to an “internet cafe” where I could attempt to sort myself out. The “internet cafe” consisted of an old desktop computer sitting in the middle of a food court (seriously) where users insert coins in $6 increments (not making this up) to pay for some sort of ancient connection that allows for a single browser tab at a time. I had seen a setup like this once before, about ten years ago, somewhere in rural Africa. I felt like I was in a museum: “Kids, this is what the internet used to be like before you were born.”

Anyway, I was stuck—at 11pm with nowhere to be except the world’s smallest island country, which wasn’t able to welcome me due to my lack of a visa. My coinage at the vintage Internet cafe (“the world’s best 1994 internet service”) had expired, and there was … nothing … I … could … do.

In situations like these I try to take a mental step back and think about possibilities. Sometimes you can fight out the visa argument with the airline staff and win. Had I been better prepared, I have little doubt I could have got on that flight. My first mistake was not further researching the visa situation, but the second one was not having a good story at check-in. A good story goes a long way, but looking dumbfounded usually doesn’t.

I eventually made it back to my transit hotel in Brisbane, where I was actually able to get online and explore options. I ordered a drink right before the bar closed at midnight and considered various ideas. Vanuatu … wouldn’t work. Solomon Islands … the flights were all sold out.

Kiribati and Tuvalu, the final remaining countries in the region, were too far and also had limited flight schedules. (I’m going there in January, and will now need to see about adding on Nauru.)

Accepting defeat, my next thought was to pack it in early and return home. I was booked for four days later on a Qantas award ticket out of Melbourne, so I called American Airlines to see about changing the date … no luck. Everything was filled up.

Then I thought of a novel idea: hey, maybe I could be a real traveler instead of a country-collector. Whoa. What an idea. Let’s visit Sydney!

I thought about renting a car and driving down the coast, and if I was with someone or had more time, I might have done so. But I found a budget flight for $145 and hopped on down. And let me tell you … I had a magical visit to Sydney.

I went to the Opera House and was appropriately awed at the view.

I went on a three-hour tour and actually stayed for two hours of it, a record for me. I heard jokes about Australian convicts and New Zealand sheep-lovers. I learned about boomerangs.

I ran in the Botanic Gardens.

I drank Americanos and lattes during the day (translation guide: these are known as long blacks and flat whites in the local language) and merlot and cabernet sauvignon at night (no translation required).

I wandered and wandered. In short, I had FUN. People ask if I “have fun” when I travel, and I always find this a bizarre question. Fun? Travel is not always about fun; sometimes it’s about self-discovery, challenge, and connection with others.

But in Sydney, I did in fact have fun, and I wanted to stay longer. Now I see what all the fuss was about. Australia is still working on the internet, but they do coffee, wine, and wandering as well as anywhere.

I’m not sure why I never made it before, but I hope to come back … often. Sign me up, Australia. I wish I could have made it to Nauru, but I’m grateful for the detour.

Question for anyone who is actually still reading:

Have you ever been on an unexpected detour? What happened, and where did you go?