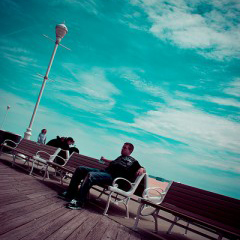 Once upon a time, there was a traveler. He began traveling because it helped him feel alive.

Gradually, he became more and more comfortable with traveling, and therefore more motivated to see the world. The more he wandered, the more he wanted to wander. He memorized flight schedules, lists of the world’s capital cities, and random airline trivia. He didn’t have much material wealth, but he was a millionaire in Frequent Flyer Miles.

Not everyone understood why the traveler was traveling. You’re going where? You’re doing what? You don’t take photos? You don’t read Lonely Planet? they would ask.

But it was so much fun. The planning, the forward motion, the exhilaration, the anticipation. The traveler liked the process of going somewhere as much as the sensation of arrival. It was enthralling, even if no one else understood it.

Then a few things happened that changed the traveler’s life, mostly for the better. Instead of chronicling his journeys for a small group of people, he built relationships (one-by-one, in most cases) with a much larger group of people. Like traveling, this was also a lot of fun. The traveler began to hear stories of other people who were on a similar path, or who were somehow inspired to begin an adventure of their own.

Whenever the traveler ventured to faraway lands, 140-character messages would appear by the dozens from the traveler’s friends and followers who wanted to meet in person. This was a little awkward for the traveler at first, since he had always kept to himself and usually went to bed well before midnight, but over time he began to understand the importance of such connections.

The traveler also had a few window-shopping critics, who thought he was of lesser status for paying more than $5 a night to sleep in Saigon, or for not renouncing the evil Starbucks empire. But mostly he had a small army of remarkable people, all with stories of their own to share.

But then something else happened … the traveler’s work, which he had always structured in a way to support his travel, began to encroach upon those same adventures. While flying to Tokyo, he would think of the ten hours he would miss being offline. And as the traveler made his travel plans, he thought, Oh, I have to get to Yemen soon, but I’ll need to fly back early for the conference in L.A.

Instead of flying to Madrid to wander through Morocco, the traveler flew to Milwaukee to get paid for talking to people. Workshops, media engagements, coffee meetings, conference calls, daily radio interviews that he stumbled through in an attempt to be coherent—these became the traveler’s main expenditure of energy instead of the travel he had loved for so long.

And very slowly, the traveler realized that he missed what he had when he started: the feeling of being alone in the world. The bright lights of Singapore. The overnight trains through the Soviet Republics. The taxi drivers in the Middle East. (Well, not those.)

The traveler had a few strengths that had brought him to this dilemma, but he also had a notable weakness: driven by what people thought of him and the fear of losing it all, he didn’t want to say no to anything. And thus when he traveled, he thought more about his Inbox than the critical need to find pastries in every city. He didn’t go out for six-hour walks very often anymore. When he saw the dozens of 140-character messages from people who wanted to meet up in Amsterdam, he began to think: I wish I could just take the train to Brussels and eat waffles by the riverbank.

The traveler also had some semblance of a home life that he didn’t want to lose. Thus, the traveler came to a fork in the road. How could this traveler still wander the world, without sacrificing his relationships or the career he had also come to love?

The traveler thought about this problem for a long time. What to do? He had already attempted, without success, to drop “at least six hours of sleep” from his daily schedule. Other conventional answers didn’t seem like a good idea. Outsource his Inbox to a faraway land? Replace the cat and hire a real assistant?

Those answers weren’t the right ones, but the traveler realized that something had to change. He took care of the easy things first. He stopped doing the radio interviews that no one listened to. He cleared a few projects from his schedule. After touring the New World for four whole months without going to foreign lands, he set aside another four whole months to write his second book.

But first, the traveler decided to take a break, completely by himself, without any agenda. And thus the traveler booked a trip without telling anyone where he was going. On the way out to the airport, he stopped at the evil Starbucks empire for a delicious pumpkin scone. The traveler was his happy, random self again. He flew two hours away for a connection to a longer flight. The flight time on the long-haul was nine hours, and he thought to himself the whole way: this is perfect.

He still wasn’t sure he had the answer to the dilemma, since he loved almost everything he did and still didn’t want to say no. But at least for now, the traveler was able to say with confidence … “Everything is going to be okay.”

The Limits of Lifehacking: What Happens When You Approach Optimization?

Re: “Let’s talk when you’re free”
© 2023 The Art of Non-Conformity | Site by Bytegrow Technologies