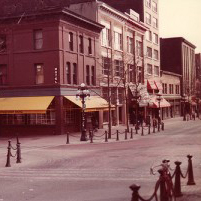 Greetings from Vancouver, British Columbia—a place I’m starting to enjoy more and more every time I pass through. I’m just here in transit again, but it’s nice to be back regardless.

This is the Sunday Store Update. If you’re new here, I use this time to share some brief news about the business side of AONC.

After the epic Empire Building trip and related product launch on April 7th, I wanted to take a couple of weeks off from promoting anything. We do still have a store, it’s still humming along, and I’ll be getting back into things shortly.

On May 11th or 18th, the Empire Building Kit will be available again for another 24-hour period. This launch is primarily for my partners and affiliates to promote, but I’ll also make it available here to anyone who wants it during the 24-hour period. (It’s one-day only because afterwards I’ll head out for a long trip to Africa, and I don’t want to attempt to sort out PayPal issues from Rwanda.)

If you’re the kind of person who loves waiting lists, you’re in luck—I’ll send the first news about the launch to anyone on this list.

In the meantime I’m writing the rest of the 365-day email series for everyone in the first group of EBK owners, preparing for the private webinar I promised them, and also reading a lot of fun notes from those who signed up on April 7th. I’ll share many more with the relaunch next month, but here’s one of my favorites for now, from Peter in Sun Valley, Nevada:

Step by step, and day by day, I’ve done more to grow my business and expand my opportunities over the past week or so then I did all of last year.

Peter’s note reminded me why it’s good to be selective. These days I only work on projects that are meaningful and valuable, which is much better than the alternatives.

For the next few months I anticipate a lighter business development schedule. I’ve been saying since Fall 2009 that this was the plan—more biz stuff in early 2010, then more non-profit stuff as my book comes out in September and I travel throughout the U.S. and Canada meeting with readers.

Otherwise, I’ll be doing a project specifically for freelancers with my friend Charlie Gilkey—more on that next week—and producing a couple of guides by other authors. Pam Slim and I also continue to produce our $100 Business Forum; we’re spending time with the April group now, and the May group still has a few slots if you’re interested.

And in travel news, my trip to Belarus and Lithuania was volcanoed (this is a new word), so I spent part of the week in Vancouver and another part in my old hometown of Seattle. More on that, and more travel hacking news you can use for your own adventures, coming up tomorrow.