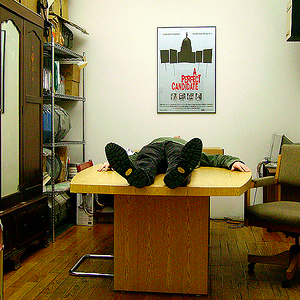 I visited a large company to give a talk about non-conformity and adventure. From all appearances, it was a well-run company doing good things.

Many of the employees came up to me afterwards to chat, and I asked each of them, “How are things at _____?” Most of them said that things were good, and I had no reason to doubt them.

Others had a different response, and either from what they said or how they acted, it was obvious that they weren’t happy. Several of them talked with me confidentially and said variations of the following:

It’s not a bad job, but my creativity is very limited.

I find myself constantly daydreaming of [something else].

I liked it here at first, but now I feel stifled.

These statements were invariably followed by something like: “I shouldn’t complain, because everyone tells me how good I have it. Lots of other people have been laid off or can’t find a job in the first place. Besides, I have good benefits here.”

Hmmm. Yes, it’s good to be grateful for what you have. Lots of people do have it hard these days, and that’s unfortunate.

But here’s the thing: it can be a good job at a good company, but that doesn’t mean it’s good for you. In fact, if you’re constantly daydreaming of something else, having a good job can be dangerous. A good job can keep you from a big life.

Sometimes what makes sense during one season doesn’t make sense in another; a commitment that was fulfilling at one time loses its allure. In these situations, pretending all is well is usually the wrong answer. If you’re discontented, it’s up to you to make a change. And if it really is a good company or organization that has treated you well, you’re not serving it well in return by giving it less than your best.

Aside from remaining stagnant and trudging along, when you find yourself in a good job that no longer meets your needs, there are only two options:

1) Find a way to bring the joy back to the good job.

2) Find a way to say goodbye to the good job.

You might think that leaving is hard. Of course it’s hard—it would be much easier if it were a bad job. Then the situation would become urgent and you’d do everything you could to get out as soon as possible. But because it’s good enough, you stick around.

That’s why, one way or another, something has to change.

Question: Have you ever found yourself discontented in a good job? What did you do?

The Art of Radical Exclusion

How to Quickly Pay the Bills