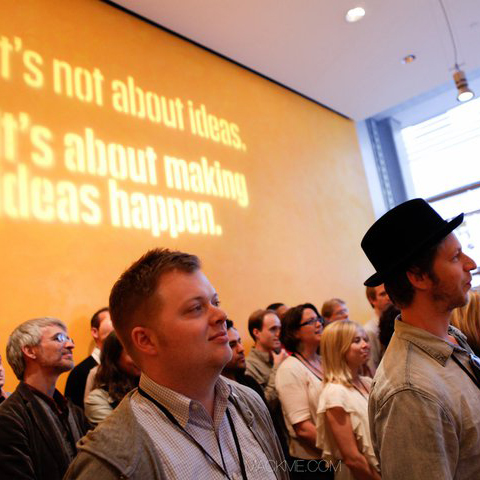 I recently had the chance to participate in the 99% Conference, a gathering of creative professionals produced by Behance.

The team put on a great show at the Times Center in New York, and my (small) part was to conduct a 90-minute “master class” on the topic of Redefining Risk: Increasing Confidence in Your Unconventional Career.

We began the class by looking at two traditional narratives of risk and career:

Narrative #1: Life is dangerous! Working for yourself is a risky, uncertain proposition. Better to take the safe road and work for a larger company.

Almost every entrepreneur or self-employed person hears this narrative when heading out on their own, especially from well-meaning friends or family members. I heard from a woman last week who has built a million-dollar company with more than ten employees, and her family still tells her she should try to find a job “to be safe.”

Narrative #2: Leap and the net will appear! You can do it. If you don’t want to work completely on your own, something is wrong with you or you’re afraid of change.

Entrepreneurs and creatives tend to be regarded as risk-takers. But what if there’s a third way between the undesirable choice of two all-or-nothing options? What about those of us who know better—we know that creating independence for ourselves is the right path, but we don’t necessarily have an aggressive mindset? We know that the cautious person doesn’t always win the race, so how can we avoid being left behind?

Our group in the Times Center lobby began with a risk-o-meter where we looked at how we view the roles of risk and uncertainty in our careers, based on questions like these:

“Working for myself is the only option. I never want to work a ‘real job’ again.”

“It’s better to do one thing very well than to be a jack of all trades.”

“I’d rather have less money and more freedom.”

The main part of our time together was focused on a pre-mortem. I stole the idea for the pre-mortem from a fun book on facilitation exercises. (Whenever you have no idea how to lead a 90-minute workshop, it helps to learn what other people have done.)

After spending a good length of time thinking about problems and disasters, the next step is to move to premptive action phase. In this phase, you identify which problems are the most pressing and also the most likely to be resolved through a change of course. For example, one group identified “the world will come to an end” as a potential disaster, and another group identified an earthquake. Those would indeed be serious problems, but there’s not much that most of us can do to prepare for either of them.

After we identify the pressing and actionable issues, we then focus on solutions. If we’re worried about money, we can establish an emergency fund. We can also establish a “fun fund”—in my case, I started a fun fund for my travel expenses a couple years ago, and it’s made a big difference in mentality. Even though I have no more or less money in my cumulative bank accounts, having the travel money in an account on its own has helped me feel more secure.

If we’re worried about a changing marketplace, we can create an opportunity list. An opportunity list is an idea list of opportunities we could pursue if we needed to generate more income. (My list is five pages long—I don’t have time to pursue most of the ideas now, but they are there if I need them.)

If we’re worried about inertia, we can use a carrot-and-stick approach: over here, I’m busy writing a manuscript for the AONC book sequel, and as soon as the first draft is complete, I’ll buy a Round-the-World plane ticket. Having the “carrot” in front of me keeps me focused, even though there’s no practical need to wait until the manuscript is finished before getting the ticket.

Your solutions may be different from these, but the goal is to increase confidence. Often, we’re worried about vague concerns and problems. This exercise forces us to bring the real problems to the surface, and then get serious about preventing them from actually taking place.

The day before heading to New York for this conference, I met with our World Domination Action Team to talk about the upcoming summit. This exercise was very helpful in identifying concerns. With less than 30 days to go until 500 people descend on Portland, what are we most worried about? Where can we take preemptive action to avoid disaster?

We talked through everything that could go wrong: a heat wave will strike Portland, causing an important ice sculpture to melt. Bottlenecks at registration will hinder attendees from a good opening experience. A speaker or VIP guest will have an emergency and cancel at the last minute. Hammocks will fall from the ceiling (long story).

We then thought about which concerns were the most important and what we could do to preempt (or at least mitigate!) disaster well in advance. Over the next half-hour, we created a list of more than twenty actions that should ensure a smoother show than we would have had without the pre-mortem.

Sometimes you may think that a potential disaster is out of your control, but there is actually something you can do to “manage it” in advance. One of our big WDS concerns is that it will rain on Friday night, where we’re meeting outdoors for an Opening Ceremony at the art museum’s sculpture gardens. Then, someone on the team suggested we rebrand the evening and call it the “H2Opening Ceremony”—thus telling everyone to expect rain.

The message of Behance is: “It’s not about ideas; it’s about making ideas happen.” I love their mission and they put on an excellent event—my thanks and gratitude to the team for including me.

How do you think about risk and uncertainty in your career?

Paying the Bills: Your Responses

Don’t Join the Popularity Contest: Make It Happen Yourself
© 2022 The Art of Non-Conformity | Site by Bytegrow Technologies